Artist Lab Report:
Thoughts of a landscape – are you still there
by Amba Klapwijk

Thoughts of a landscape
are you still there

Everything about the summer sky is spectacular, showy, theatrical. The starts in the evening, the moons at midnight, the rays of the morning sun – they all shine with special brilliance.
In summer, the waters of lakes and ponds mirror the clouds by day, the moon by night. The fireflies in the grass repeat the stars above. The drops of the dew catch and magnify the rays of the morning sun.
All the prairie world is a in summer but a screen to show off the glorious sky. (Paul Gruchow)

This phrase couldn’t describe any better how I felt walking around in the nature at Lakeside. Every night – walking back from the art studio, Bodine lab – I felt accompanied by all the fireflies and the stars above.

I found the quote in one of the books in the library, Journal of a prairie year by Paul Gruchow, and I used it for the installation I have been working on in the last two weeks of my residency at Lakeside.

The day after I published my first blog I went with Mary Dunn to Cayler Prairie. She is a researcher visiting Lakeside every now and then, and she studied prairies, the soils, its restoration, for years. What was it inspiring to join her! At Cayler, she observes the prairie plants: she writes down which plants she sees and in which stage of maturation they are: just leaves, almost flowering, fruits, seed.. She also writes down which birds she has heard or seen.

Of almost each plant that we found, she was telling its name and something about the plant. Some of them, as the Reed Canary grass and Smooth Brome, which you see a lot everywhere, are not from the prairie originally. The grasses come from agriculture and they act quite dominant – not leaving much space for native grasses like Bluestem, Needle grass and Sedges. Other non-native plants as Yellow Sweet clover, Red clover, Kentucky bluegrass, Timothy grass are less dominant and don’t overrule the native plants.

One aspect of Mary’s research on the prairie is about the soil. She believes (in simple words) that first something needs to happen with the soil, before you try to create a new prairie. The soil in Iowa was once so rich… The roots of prairie plants grow deep and hold many nutrients. The first farmers made use of this. But now the soil is exhausted in many places and other plants are taking over…

Mary also helped me with finding articles in journals about the prairie that might be interesting for my project. There is so much in the library to read.. Since then I have spend some days in the books to find quotes that I can use.

I am so happy that I got to know Mary, she told me a lot about the prairie. It was fun to go to Cayler with her and to observe all the plants!

Over the weekend it was very silent at Lakeside as many students go back to their homes.  As I had collected many quotes and poems, I started to ask around at Lakeside whose voice I could record. I’d like to create an installation with loudspeakers where you hear different thoughts and observations about the prairie, and a list of prairie plant species that exist here in Iowa.
I was happy that many residents wanted to be part of it, I recorded in total around 20 voices.

On Monday I went together with Tony and Leigha to the Prairie Flower, an half hour drive from here. The prairie flower is owned by a married couple, Bev and Dwight, and they have a square mile of sand, gravel, farmland, wetlands, the Little Sioux River, and most important for me right now: native prairie!
Some pieces of their land used to be old fields of agriculture. Dwight gave us a tour around their land in the ranger. And we crossed all over the country off the roads over the prairie fields.
Dwight told us about the process of restoring the prairie. There were so many beautiful flowers and grasses. They sell seeds that they harvest by hand. They were so friendly, we were invited to have lunch together and have eaten delicious zucchini cake. Leigha and I want to come back and help pulling thistles! 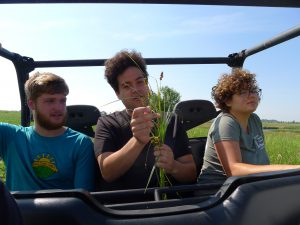 The day of the concert which I wanted to realize was approaching… The 11th of July.
As I thought I wouldn’t be able to find musicians, I was about making an installation with loudspeakers and recorded voices only. But just on the Tuesday before, I heard about a young violinist and cellist that were interested in playing at the concert! I only had two days left to decide about the musical part, which resulted in being a few chords organized around the tracks of the recorded voices. The musicians had the freedom to improvise along these chords.

The concert was held on one of the prairie hills of Lakeside. Many people came all over to listen. In the end it worked really well, the voices and the music together – even despite the short amount of time I could work out the musical material.

But most important of all, I felt that the piece connected to the audience. On one hand as many of the visitors were part of it (their voices were in the composition), on the other hand because they could relate to different quotes and poems, along with the music and silences that gave an atmosphere to it.

I hope that in the future I could share this composition with others, who are perhaps less familiar with the prairie and its beauty, history and necessity (as I was before coming to Lakeside). The piece became in the end an ode to the prairie in Iowa.

There are only a few tall prairies left today, but they are worth seeking – worth going to and being in. They are the last lingering scraps of the old time, fragments of original wealth and beauty, cloaked with plants that you may never have seen before and may never see again. (John Madson) 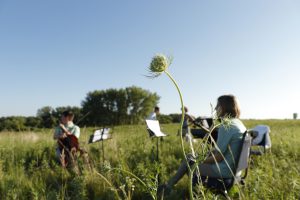 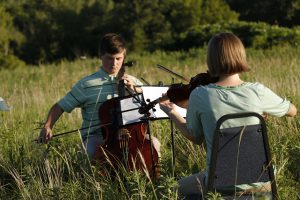 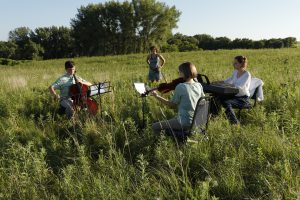 Anna and David Smith on violin and cello, Amba Klapwijk on piano

In the composition / installation for 3 loudspeakers and 3 musicians

Thoughts of a landscape
are you still there