Artist Lab Report:
The Art of Observation
by Naomi Friend 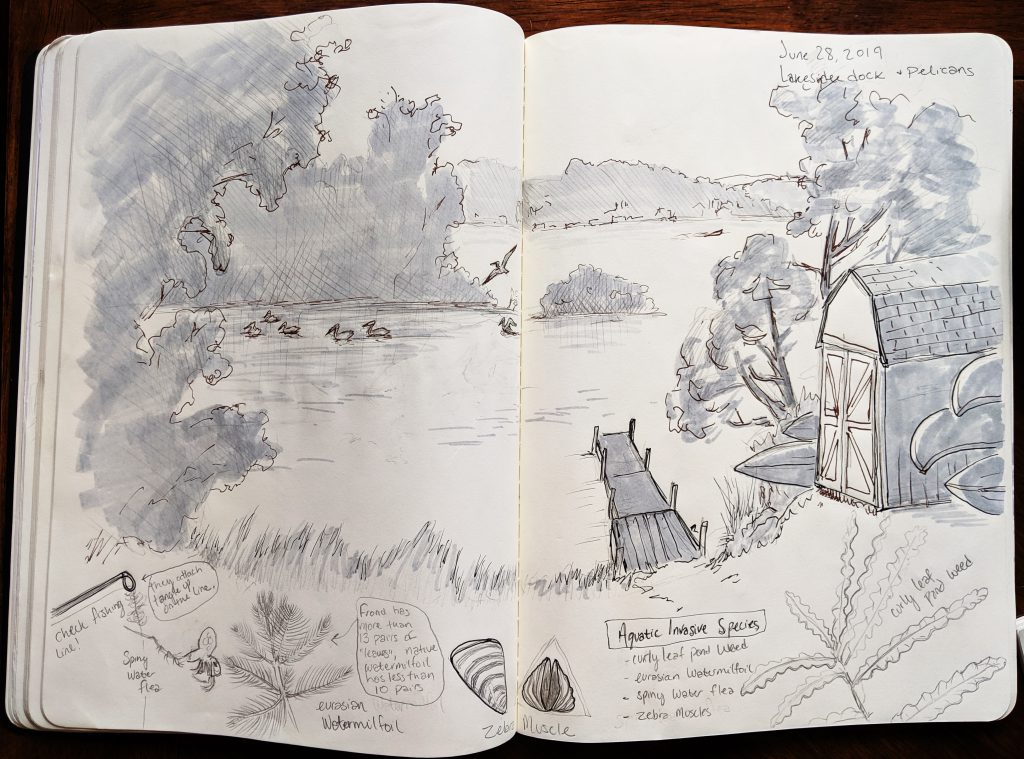 I sat by the cold fire pit on Saturday morning watching the dawn before breakfast. I sketched the pelicans enjoying the unruffled water of little miller’s bay. Before long, a few dozen had gathered, each splashing down with unexpected grace for such a big bird. I remembered the afternoon of quiet reflection a few days ago, floating on a kayak right where the pelicans now rested and studying the fish through the clear water. As my sketch developed and the sun grew stronger, the first weekend boaters began their mosquito-like whine far across the lake. The pelicans began to bunch together. If someone went out on a boat, they would flock in unison and take off to a less disturbed place. I too would soon be leaving Lakeside with my two week residency complete.

The second week of my residency was just as eventful as the first. I became acquainted with some of the other classes on campus through various activities. 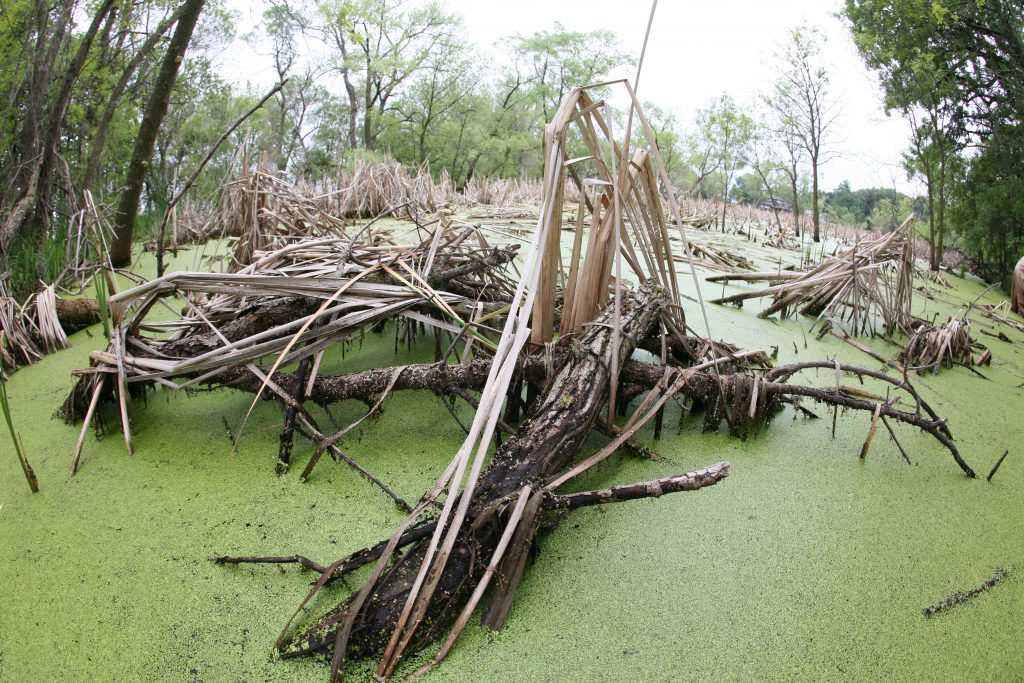 The Fen in Gull Point State Park was thick with dead cattails and duckweed, sheltered from the wind by a young stand of trees.

I visited Gull Point State Park to sample a fen with a class focusing on aquatic ecology and the health of overall water systems. They were looking for a carnivorous larvae which never materialized due to the cluttered condition in the marsh, but we did note the changing conditions of this body of water. It is now mostly covered with duckweed due to a line of trees which has grown up into a windbreak and copious cattails. This winter, many of the cattails died. We surmised that the deep freeze combined with the lifting action of the ice killed the root mass. The cattails are probably a naturalized hybrid of the eastern and native type. They are very aggressive so this may not be a bad thing. 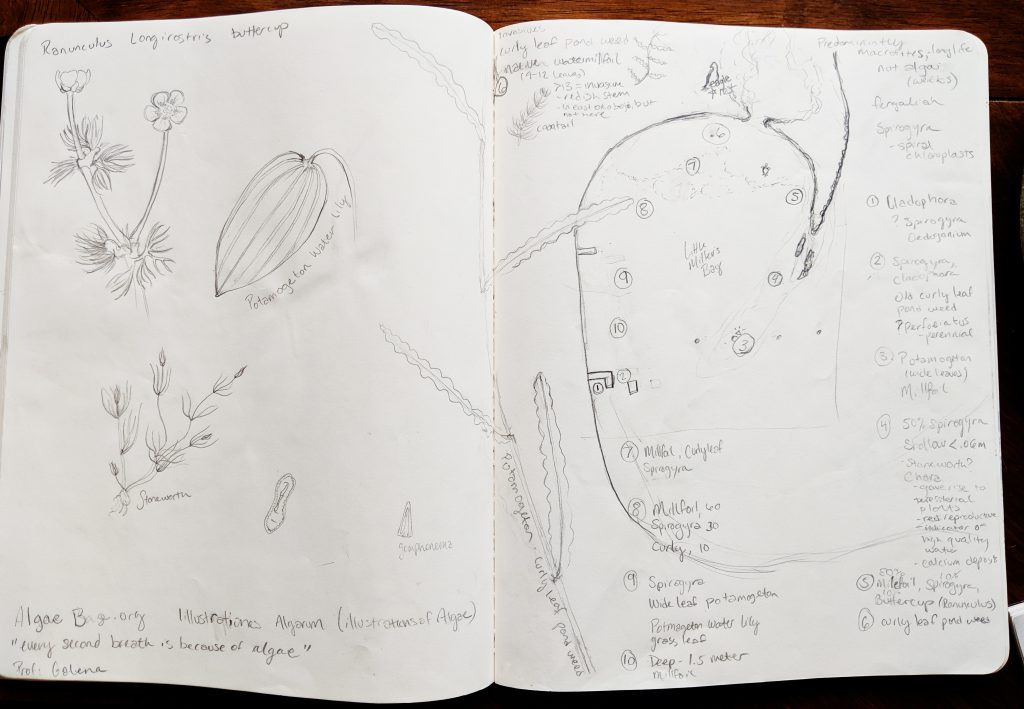 We sampled Little Miller’s Bay, each spot being labeled to document the types of lakeweed growing there.

I went out into West Okoboji Lake with the Algae class to sample a variety of points in Miller’s Bay. Algae in Latin means Seaweed! It isn’t just limited to the slimy green stuff. The students were learning how to sample and note the kinds of algae growth in each area in order to be able to say how a certain community may affect the counts of various diatoms (another algae). I learned the names of lake weeds out in the bay by the research station, and some of the invasive aquatic plants and animals that threaten native wildlife.

Cyanotypes of views through the microscope of different algae with non-magnified algae in the background.

I spent a pleasant afternoon looking through the microscope and sketching different diatoms – an algae that makes a silica (glass) casing around itself and creates and stores energy from the sun in the form of oils. If we could harness their productivity, we could fuel our cars with oil from the sun. Algae produces 50 percent of the oxygen we breathe. It was amazing to study them. 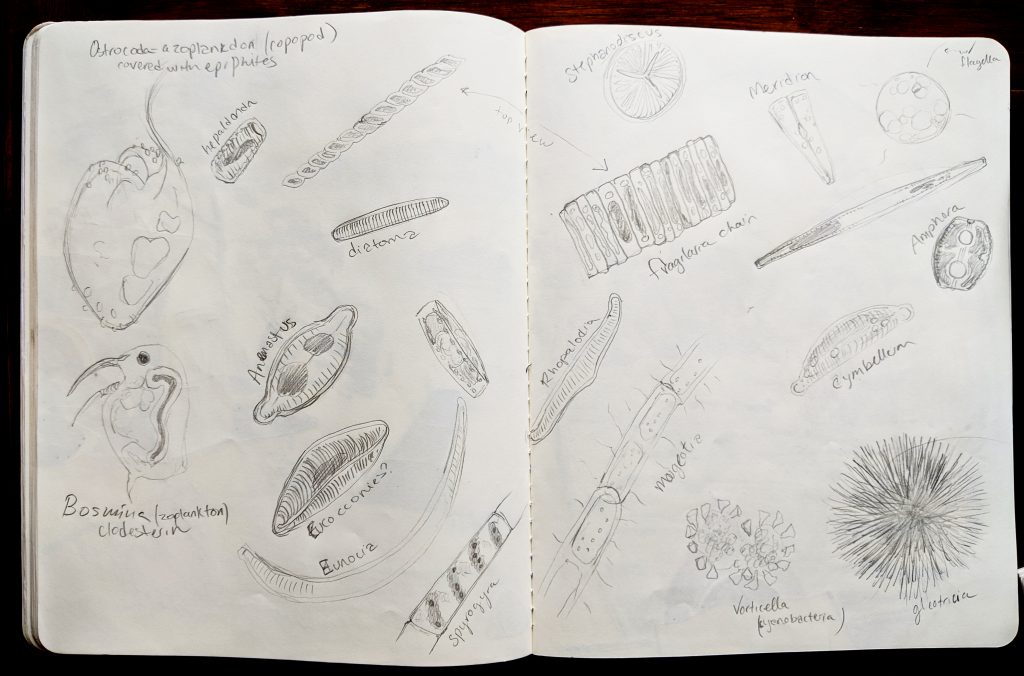 Diatoms (and a few other things) sketched by viewing through the microscope and identified by members of the class. 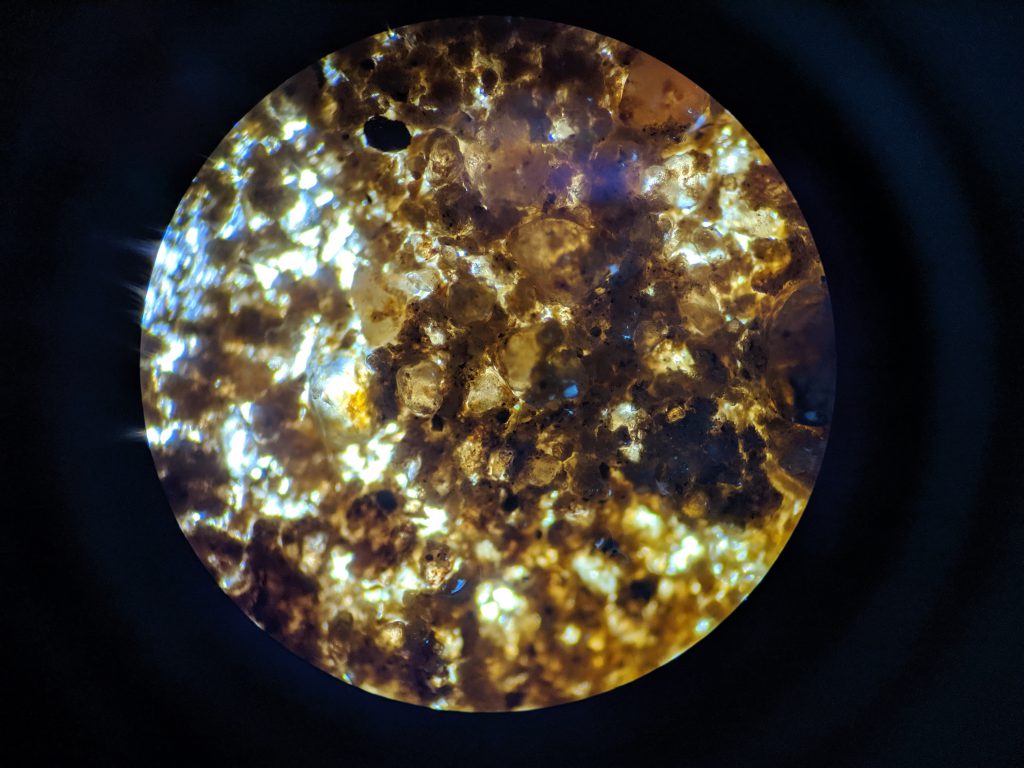 Soils through the microscope are more intricate than you would expect.

I was able to get a rough understanding of the study of soils in Iowa and why some sites are of interest. Young soils, maybe only 5,000 years old, are exciting! Iowa is home to the Loess Hills – one of only two deposits of Loess in the world. The other is in China. Scientists still don’t quite know what formed them. 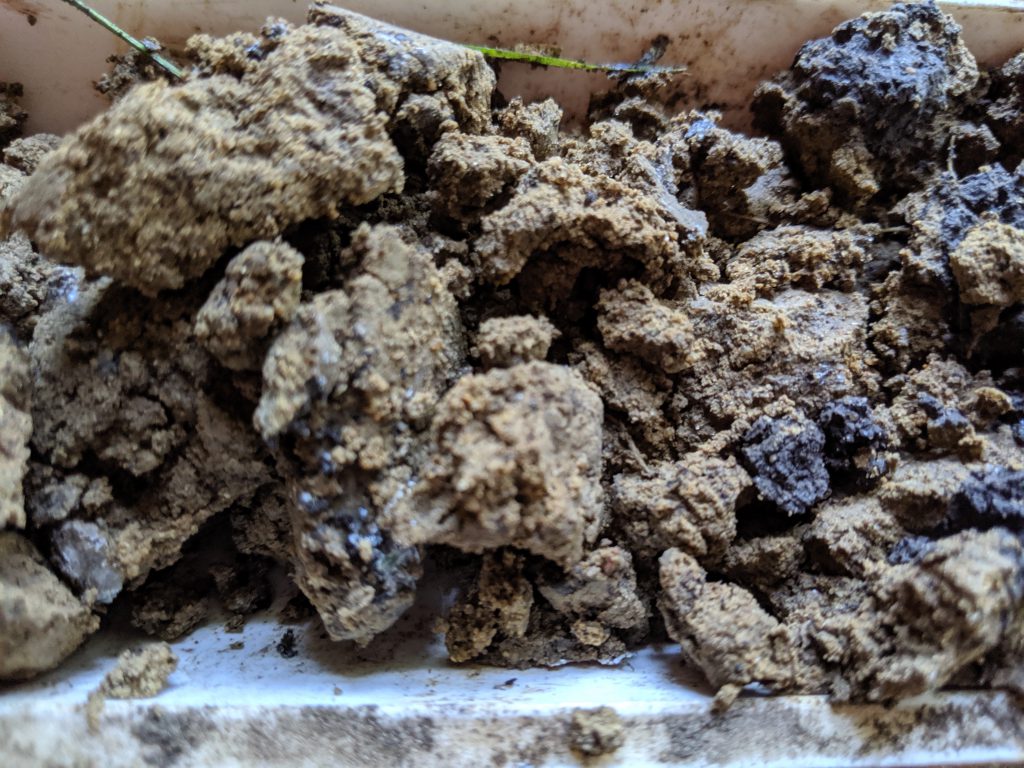 Part of a clay sample still in its tube.

I attended a talk by John Doershunk, state archaeologist of Iowa. I learned a rough overview of the Prairie Lakes Woodland Phase, and a few details of what John and the students have discovered while digging around the Iowa Great Lakes in the past 10-20 years. Documented Archaeological finds are way more numerous than I thought in Iowa, and settlement in the Midwest was actually much more dense than out east (for example, New York was home to a population of around 1,700 Native Americans while the Midwest had some cities of over 10,000). The plentiful resources of Bison and rich soil contributed to a thriving trade economy. 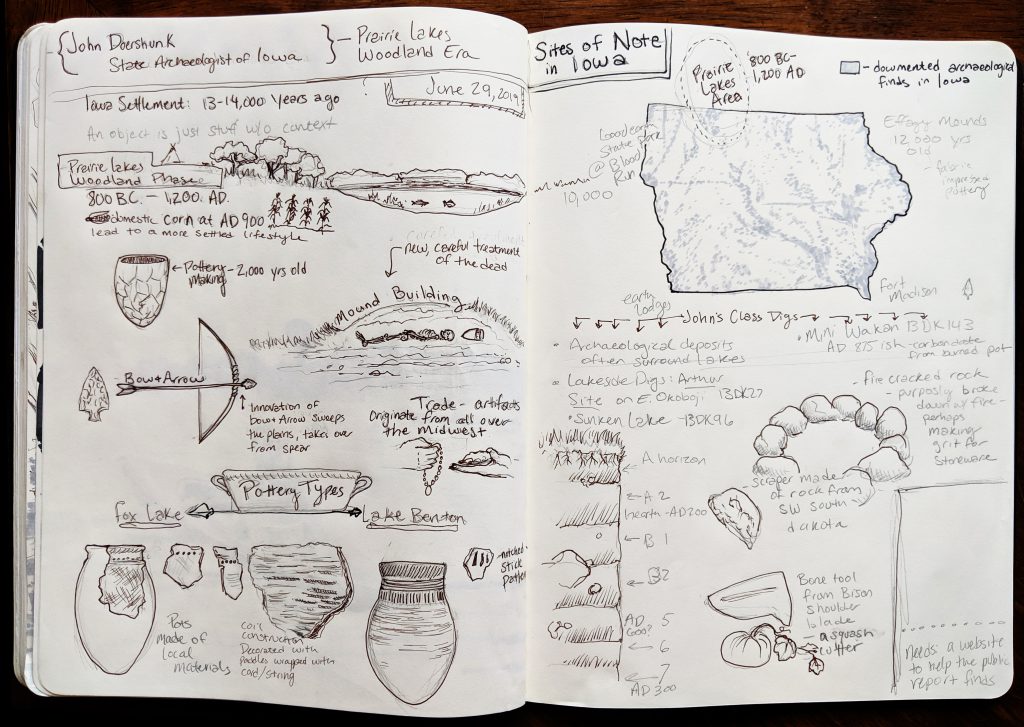 Lecture at the VFW in Spirit Lake about the peoples of the Prairie Lakes Region about 2,000 years ago.

I also attended a screening of the film Lost Nation: The Ioway 3, and was able to hear some of the details of the filming and interview process. The film was produced by Kelly and Tammy Rundle who have spent approximately 20 years working on this project. They were both present to answer questions. I thought they did a good job of presenting the perspective of the tribe, (though not Ioway themselves.) I came away with a deepened respect for the Ioway people, for their strength and perseverance in a modern world that is too often set against them. If you are looking for a way to spend a few evenings, watching The Ioway films would be a good choice. 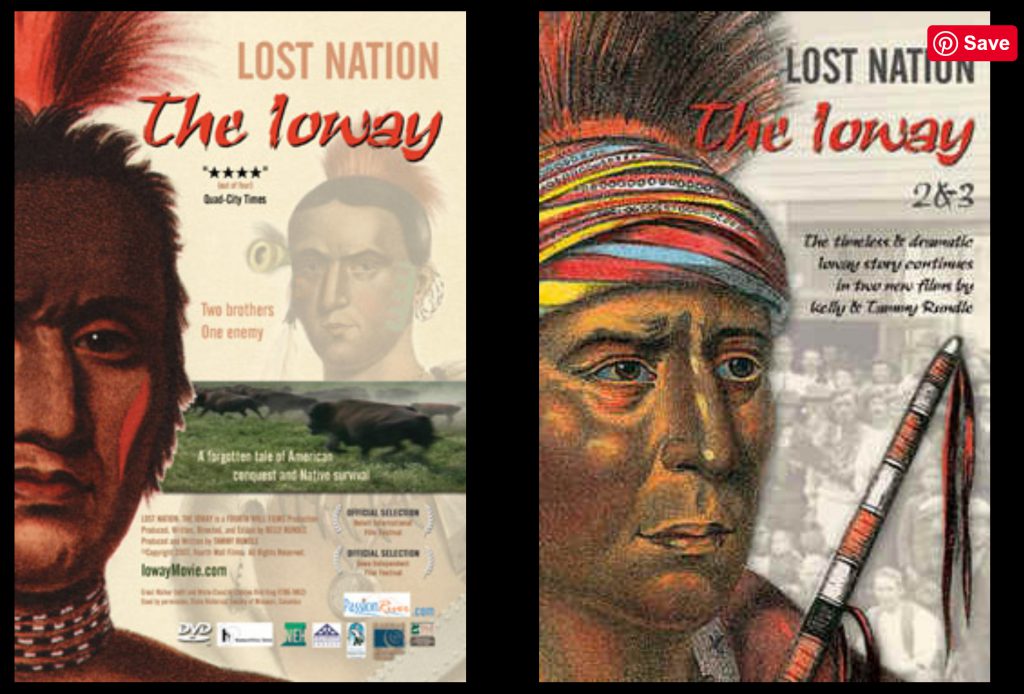 I leave with many new ideas for my art practice. I got back into the swing of keeping a sketchbook, and through that, was able to hone my observation skills. Good observation leads to good questions, and good questions lead to further study. Most of all I leave inspired to continue my work about the land around us, the creatures that live in it, and the delicate line we tread between consumption and appreciation. 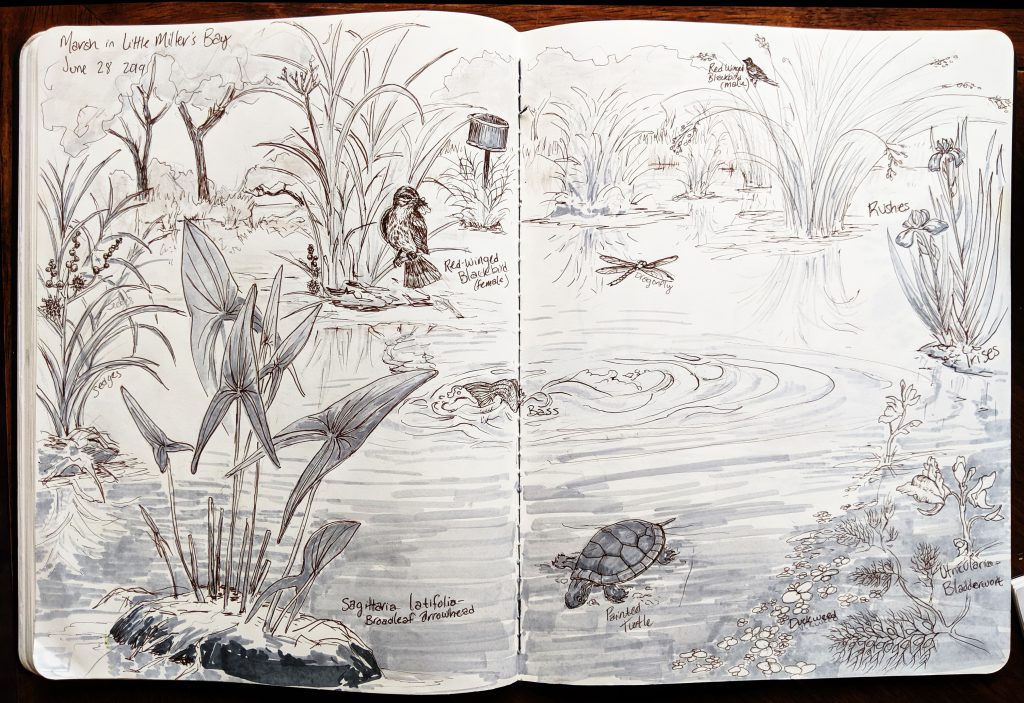 I sketched the marsh between the bay and the rest of West Okoboji Lake while sitting in a kayak. 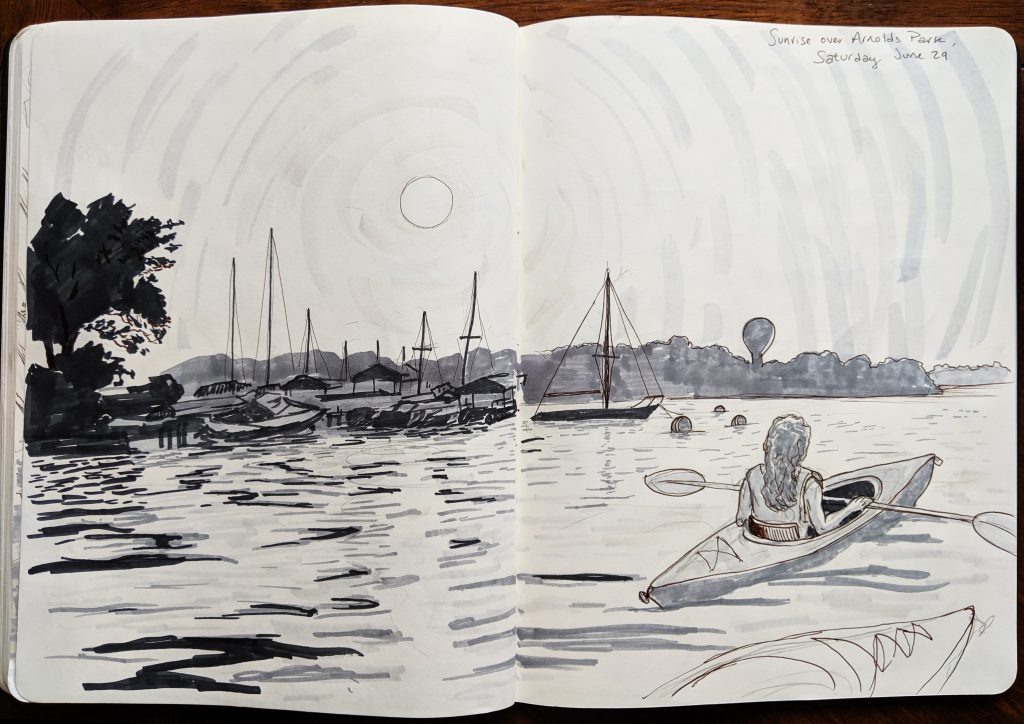 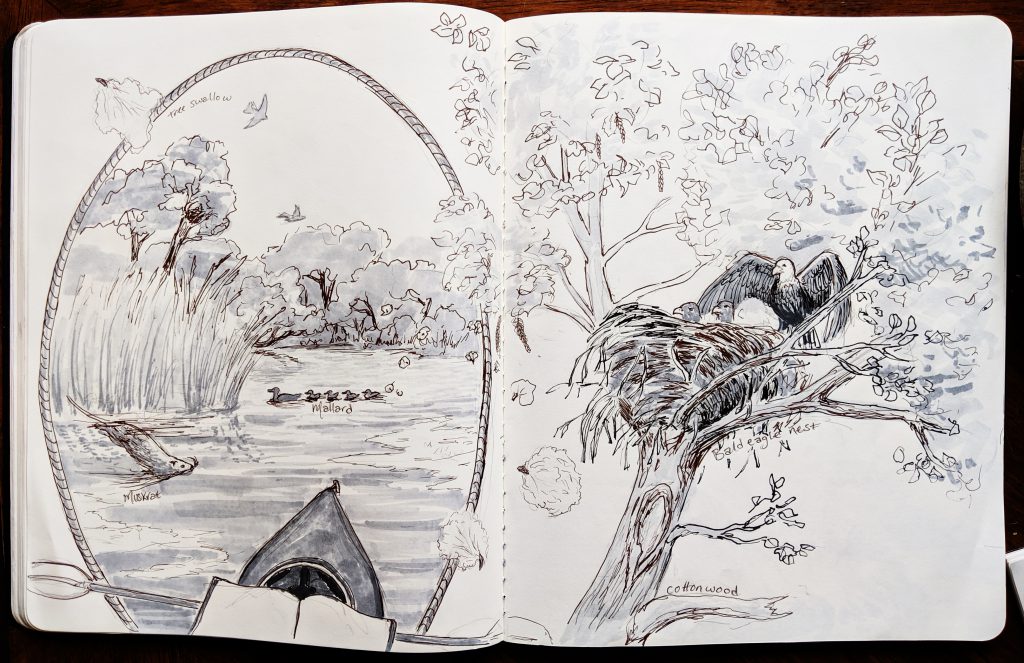