I cannot believe how quickly the second week of the residency flew by.

The first couple days of the second week, I was on an art making grind, trying to get all of the work that was in progress completed for the Open Studio Visitation on Thursday. Over the weekend, I had received some tree cores from Paul, and on Monday I realized what I wanted to create with them. I have been quite intrigued by the idea of tensegrity, since I have learned about it, which tensegrity is in an architectural sense how the main properties of a structure do not have to touch in order to be stable, they can remain under a tension between strings and proper positioning of the main structural elements in order to remain intact and upright. So I wanted to use the tree cores and hemp cord that I used to string them together to create the three dimensional sculpture as a metaphor for how trees and nature do so much for us that sometimes we cannot see or recognize the connection between us. Not only just that, but truly nature is the reason that we can survive on this earth and we must acknowledge that. 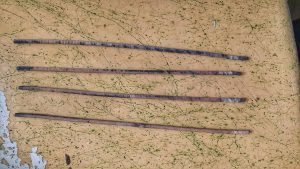 On Tuesday there was a lot going on at Lakeside. There were groups of children going from different activities around Lakeside and I chose to assist Leigha with the drawing and painting activity for the children to do. It felt incredible to listen to the children describe to me what they were creating. I loved to be able to get on their levels and answer their questions about all the little natural displays set up. Their reactions sometimes were absolutely priceless!  Later Tuesday evening, I attended the speaker who talked about his research regarding the restorations of varying marshes in Iowa and the populations of a couple different amphibians. It was eye opening that a lot of salamanders in Iowa are actually underground to stay cool and maintain hydration. I was even astounded that even though the salamanders were underground most of the season, they still survived and grew twice their size. I am grateful to hear that there area restoration operations regarding the marshes and areas where farmland has invaded the habitat of numerous species. I think it is so important to give back to nature because it does so much for us. 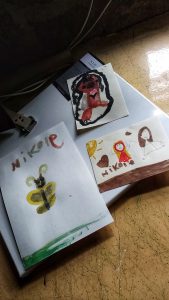 Sweet little Nikole gifted me with her paintings after her group’s drawing and painting activity.

Wednesday started off with a beautiful yoga session at 5:30 AM and continued to be another productive day in the studio. I spend a majority of the day trying to wrap up all of the projects, which excitedly I was able to. I even was able to get some time in the library doing some research about trees and fungi. I also got a lot of skateboarding around the trails in in the past week and a half. I skated approximately 24 miles total. I encountered a variety of animals along this path like deer, swans, snakes, and a painted turtle. It was a nice way to get some exercise in and to really become more familiar with the area.

The next day was the day that I think most of the people at Lakeside were looking forward to this week which was the Open Studio Visitation day! Thursday was incredibly productive for me as well as I finished up my last piece for the Open Studio and cleaned up my studio space for guests to enter. The event was absolutely incredible. I received so much positive feedback from all of the residents at Lakeside and some other residents from the area as well. I am so grateful to have heard people’s perspectives and how each piece made them feel. It was really neat to also explain to the visitors the meaning behind each piece and how I created them. All around it was an absolutely AMAZING day. 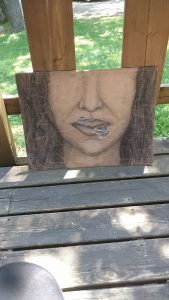 The last full day at Lakeside was Friday. Friday, I road along with the aquatic ecology class to Pilot Knob State Park to visit the only area that is considered a “bog” in Iowa. It was an absolutely incredible experience. Listening to Paul talk about what defines a “bog” and going on a search for one of Iowa’s carnivorous plants, the sundew, was truly one of the best parts of the entire residency for me. It was exciting truly thinking in depth about what kind of area on the bog the sundew would thrive in. I made some deductions about how the plant would definitely need sunlight, so it would more than likely be in an area that was elevated or where there were not so many ferns or tall plants that would cover its so very necessary sunlight. Paul noted that they had not found the sundew the prior two years, so when I  was the first to discover the sundew on an elevated little bulge called a hammock everyone in the group was super excited, especially Paul. 🙂 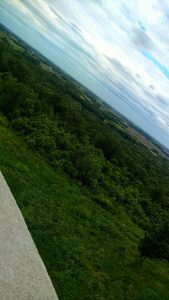 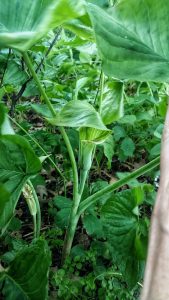 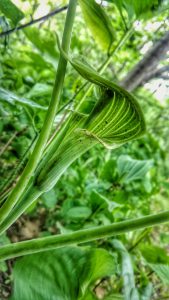 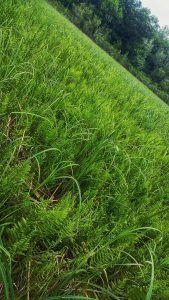 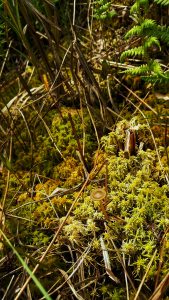 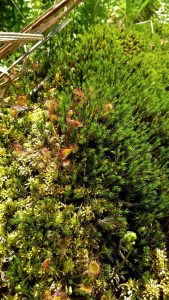 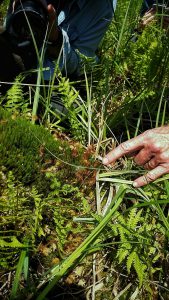 That evening I ended my last day on my first ever kayak ride with some of my favorite people I met during the residency. It was beautiful to see the bald eagles nest with the mother and her young ones and to actually kayak into the swampy area where carp were splashing around like no other. The sunset on the lake was the most incredible sight I have ever seen. I was absolutely speechless about the contrast between the sun setting and the moon rising and us all caught perfectly in between on the lake surrounded by trees. That moment of looking a back and forth between the sun and the moon will forever be one of my favorite memories because of true visual representation of harmony and balance.

The past two weeks were truly the best two weeks of my entire life this far. I am so grateful for all of the beautiful people I have met, the experiences I am thankful to have gone through, the places I was so blessed to wander, and the time in the studio creating all of the work that I did. Lakeside Labs truly sparked a change in my life and I take with me a greater awareness of the environment, appreciation for science, yearning for learning, and better habits as an artist. Thank you everyone who was apart of my journey as an Artist in Residence at Lakeside Labs. It was truly so much more than what I could have ever imagined.