Day one
I was anxious the two days before departing for the residency up at lakeside labs. I didn’t sleep well. I didn’t pack until Sunday afternoon when I drove up and kept forgetting things. The drive up was perfect, sunny, and clear. Driving past the etched checkerboard of lines the Jeffersonian Grid, those mile by mile squares which make Iowa so unique. I feel like a pawn in some sort of game I didn’t understand. I had just finished a grueling three years of graduate school at Iowa State and had successfully graduated with an MFA.

When I arrived at Lakeside it was about 5:16—the weather was perfect, and I wandered around to try to figure out where everything is. Alex Braidwood greeted me and showed me around and introduced me to everyone—Dinner was good and afterward I walked the rest of the property – and then retraced my steps to figure out what I had missed.
After the preparation for the trip, the drive, and a long walk, I fall into bed exhausted but already amazed at the stunning landscape so different from the unglaciated areas of Southwest Wisconsin.

Day two
After breakfast we (Anna the writer in residence and Ellen and I) went out on the pontoon with Paul. Going east, the water spattered us art folks and Paul’s Class as we huddled against spray. The objective was to take some measurements of oxygen levels, water clarity and to take samples from the bottom of the lake. The class attempted to take samples; however, the whitecaps and constant breeze drove us sideways after the boat engine was turned off.
After lunch I got to see the Lab’s excellent collection of preserved specimens. This was an artist’s treat—I took literally hundreds of photographs of the skull collection of the rodents/ mammals—although the insects and the birds were of interest as well. I am considering doing a large drawing of these skulls (possibly a two by six-foot work) but I cannot hope to do it while here at Lakeside. Most of my work takes hundreds of hours and I really want to be able to attend as many classes as possible and soak up the experiences. I can draw from photos later and recall my own sensory memories to augment the image.

I photograph the collection and draw most of the day. I start by making small studies from life of the skull collection—drawing a fawn and rabbit skull. These two, for some reason, I found most resonate with me. There are rabbits across the campus and I see a spotted fawn as it wanders near its mother on campus. I have drawn dead critters in much of my work in graduate school but something is different about drawing dead creatures here. I think it is the Arsenic used to preserve the dead creatures the pungent aroma of which smell like a grandmother’s basement, mothballs, and a vaguely sinister chemical smell. Drawing a dead possum by the road is one thing—there is no sense of danger. Here with the surreally preserved creatures—there is a sense that the chemicals could hurt one in such a way that the dead things you find on a walk cannot. 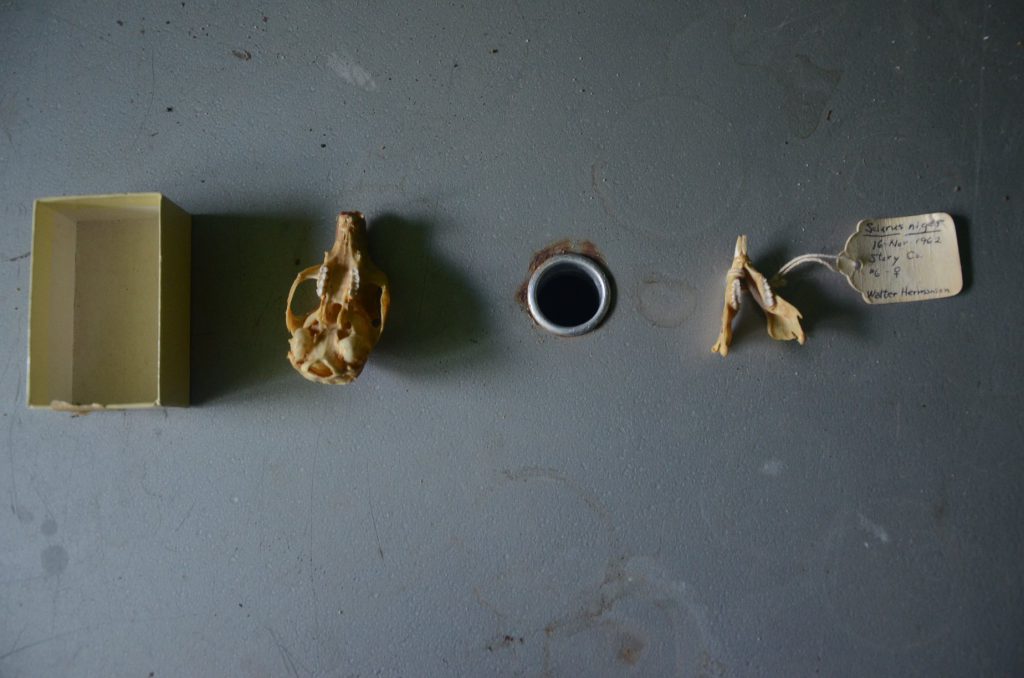 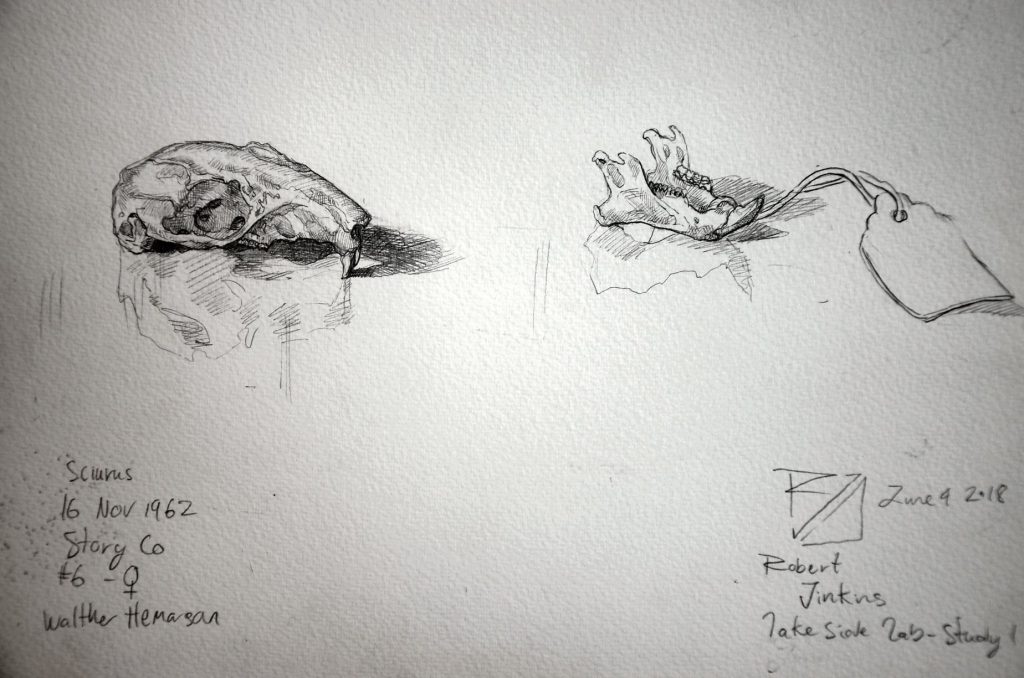 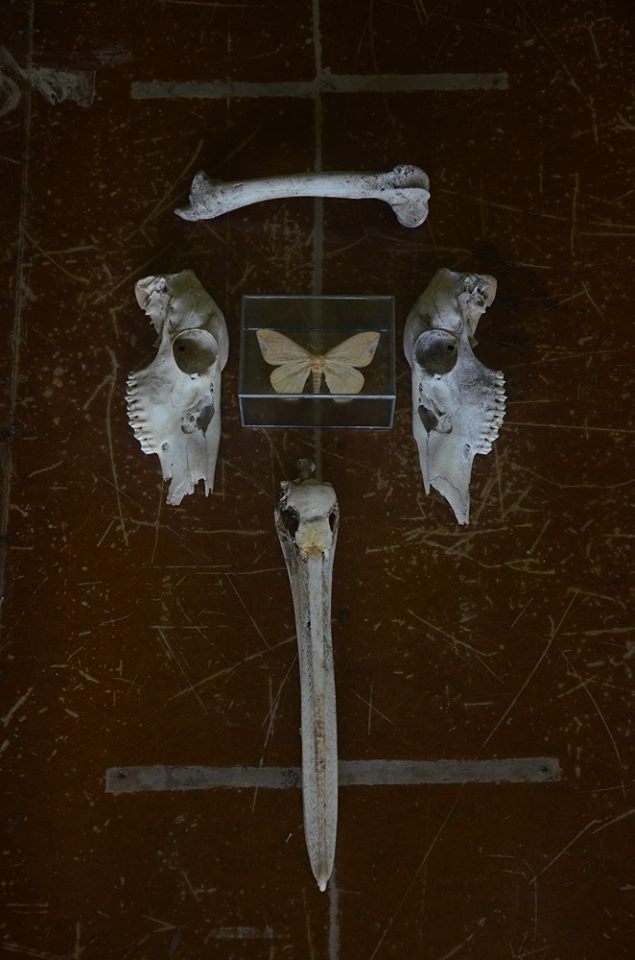 Day Three
The morning is spent netting fish with Neil’s class. The class followed Neil to specific locations at the lake with a large net in hopes of being able to collect fish. The day was perfect, but the technique of the class was not as we inexperienced students pulled the net close to shore but didn’t get the fish captured in the net because the minnows and other assorted fish simply hid among the rocks near shore and made their daring escape once the students hesitated. Despite this, the class recorded their results and learned about fish.

In the afternoon, I tag along with Neil’s class to visit the fen; the resident dragonfly and damselfly expert comes along as well. The fen looks like a series of stretchmarks on the north face of slope. The day is beyond beautiful with a kind of bright hazy day and stark shadows from bright summer sun.

It is a hot day and after returning to Lakeside I go for a swim before dinner. After the unaccustomed physical exertion, this tired artists make a few sketches and then head to bed. 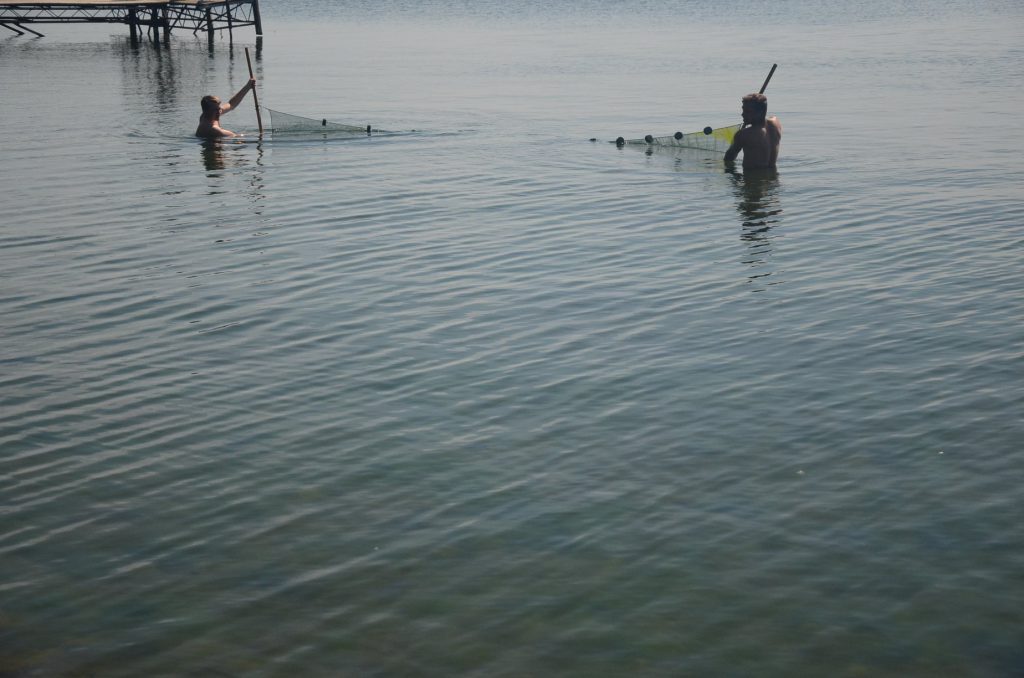 Day four
I go out kayaking in the afternoon with Neil and his crew. Neil is a great guy who exudes the confidence as a teacher I still hope to master. We paddle out to the Eagles Nest and then to the wetlands and see the duckweed green growing in the water. The color is amazing and reminds me of some sort of Apocalypse Now movie scene where Martin Sheen is boating back to kill his target. The kayaks’ sterns leave long stretches of duck weed pixilated against the reflected sky. The class goes swimming back on a pebble covered beach and then paddles back to lakeside. One of the students tells me that the distance is 4.6 miles of Kayaking. 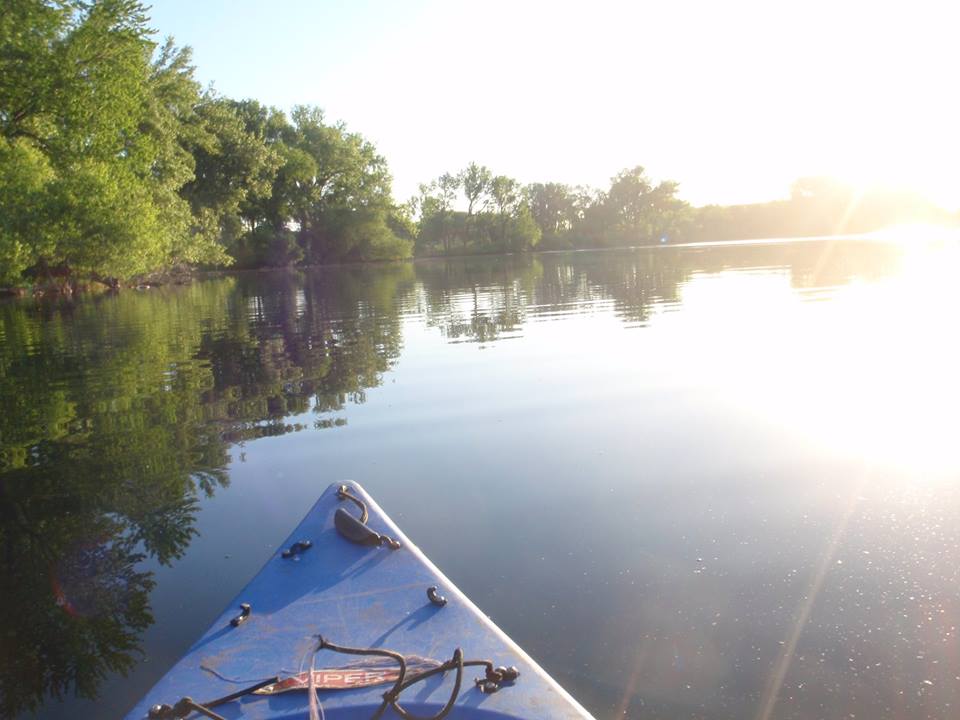 At night, I notice I have awful sunburn from kayaking (a distinctive round kind of burn which makes my knees resemble swollen fish carcasses (but less pale and definitely more red). I go to the Writing workshop lead by Kartika Budhwar and listen as she reads some of her poetry. I was in an English poetry class with Kartika while at graduate school and I was amazed by the depth and breadth of her work then. My feeling on that score are only heightened by her readings.

In the evening I work on my drawings some more—I start to do studies around campus. I grew up in a science type household to engineer parents and my sister became an engineering physics major. I grew up around topics such as runoff, best practices for prairie management, weed control and the like. What strikes me about Lakeside isn’t these things. It is the pace of things and the accumulation of time. To think that students have been coming here for all reasons for over one hundred years fills things with a type of significance and perspective. People came—had a wonderful summer and left—lived lives hopefully enriched by the experience—and died. I want to make sure I document that kind of pace—that knowledge that two weeks will go by faster than I want to admit.

Day five
Artist Talk in the evening—I felt nervous, unsure and feel some pressure to have completed works to share but I decide to focus mostly upon the sketches that I’ve completed. Ellen has her knitted figure but I don’t have much having just arrived—or so it seems. I work on drawing during the day: the water pump south of the Brown Hotel, some flowers, and other assorted things around the campus. I consider trying to print off some of the pictures but decide I have enough sketches to fill up a table.

I have some other works from graduate school, some prints, and one painting I am working on while up here to get it done for an exhibition opportunity. I think it was well attended. I drank one of the PBR’s that Alex brought and discussed my work with students, faculty, and guests. My two by six foot drawings are the point of much discussion as well as the sketches—I discuss Andrew Wyeth with the resident dragonfly expert—and have a long conversation about Grant Wood with a Native American student from University of Iowa. The two hours go by quickly and enjoyably despite my anticipatory angst.

Day six
I go out to the kettle hole alone—my GPS attempts to send me the wrong way but I manage to locate Freda Haffner preserve on my own with a little guesswork. The day is my favorite combination of windy and overcast with grey skies—a greying golden lab chases the gravel dust kicked up by the car. After parking I walk out from the parking lot into the thick grass heading to the glacial formed sentiment.

I walk the length of the preserve, but I cannot find the dead coyote everyone told me was there. I hike around the water and get my boot a little wet as I stupidly try to cut across a marshy wetland area to photograph a boxelder tree. I love the look a boxelder tree seems to acquire in wet areas—they look like bonsai but larger and more disheveled. I try to jump between the areas of solid sod but end up getting more than my boots wet. 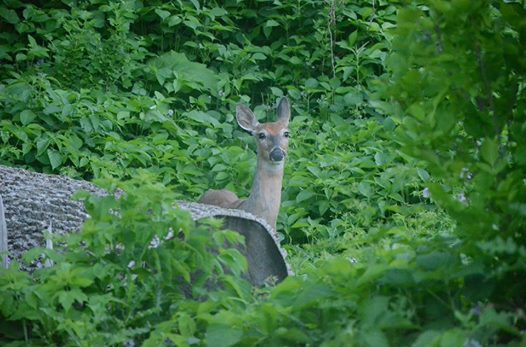 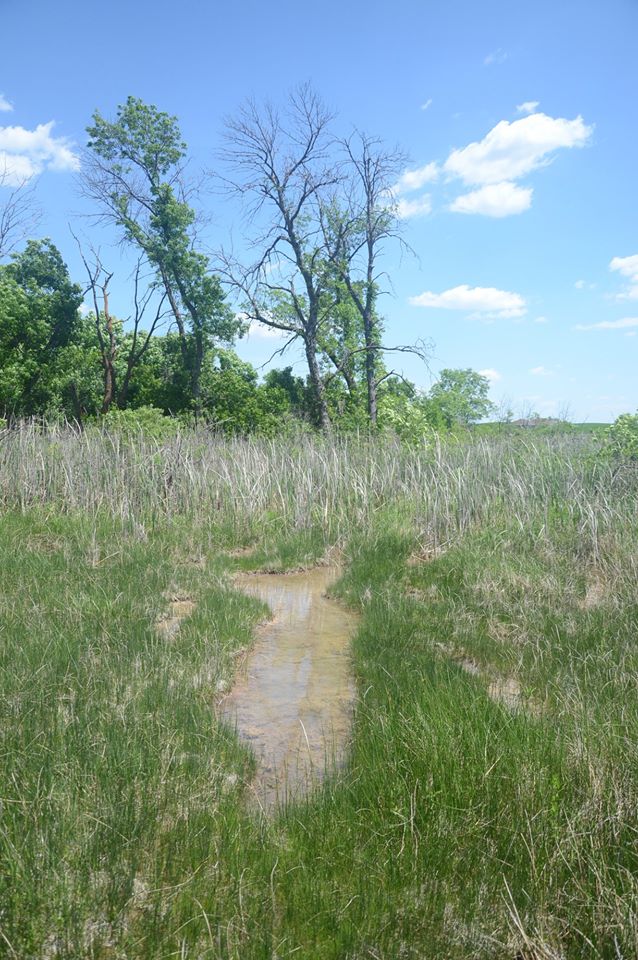 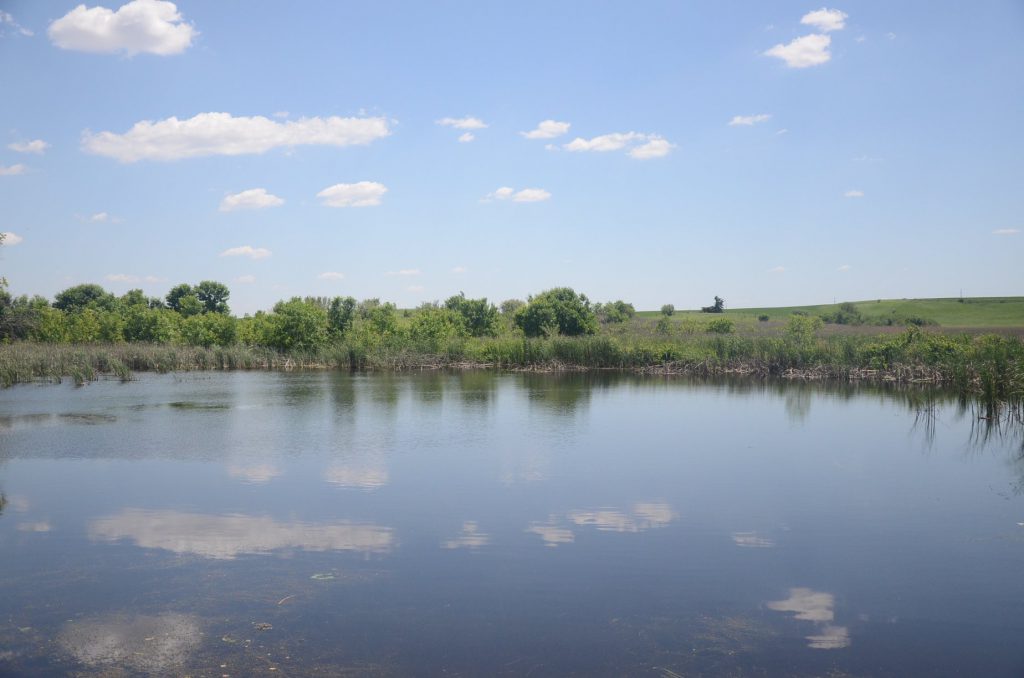 In the afternoon I start to sketch but then go out Kayaking with Anna, the resident writer. We go all the way out to the marshlands inside from Eagles point and back. We discuss muskrats, the French revolution, and western art and literature. In the evening after dinner I help some of the students start a bonfire in the wind. I am nicknamed “Firestarter”—I assume that means the students have accepted me as one of their own. I hang out with some of the camp staff in the evening.

Day Seven
I consider going to Ames– I really want to start on a two by six-foot panel, but I can’t justify driving down there. So, I work on sketches, photograph some more and revisit the Art Museum in town. I continue to spend the afternoon taking photographs. It is relaxing to take photographs not as a means to the end of a finished drawing or painting but as an end unto themselves. I’ve taken many photographs in the past documenting the landscape the its people but have not focused on science for several years or focused on using photographs as a kind of abstract art form of its own.

Summary of week 1: I shot hundreds of photos and did a handful of sketches—the best of which got onto this blog post. Of these hundreds of photos—three or four compositions are strong enough that I probably will take them into paintings or drawings. In addition, I completed a number of studies from life—a luxury I don’t normally get to do with my more studio-based painting and drawing—these drawings have a carefree effortless character I don’t think is common in other bodies of my work. I made a conscious decision that I was going to focus upon doing the visual research to do larger projects and have fun doing spontaneous studies from life.

Finally, I learned a lot about fens, fish, diatoms, plants, and animals that are not indigenous to my landlocked home farm or most universities. The opportunity to learn from subject matter experts somewhat distanced from the normal ‘Art’ subjects was both eye-opening and refreshing. I had a great time going to classes and fieldtrips! Looking forward to week 2. 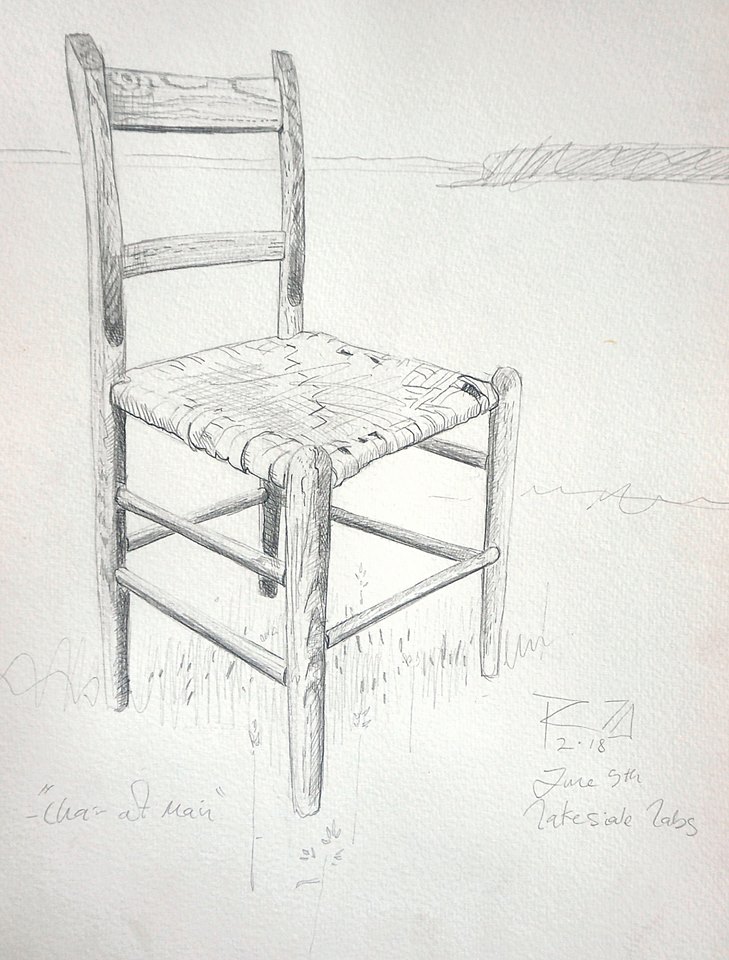 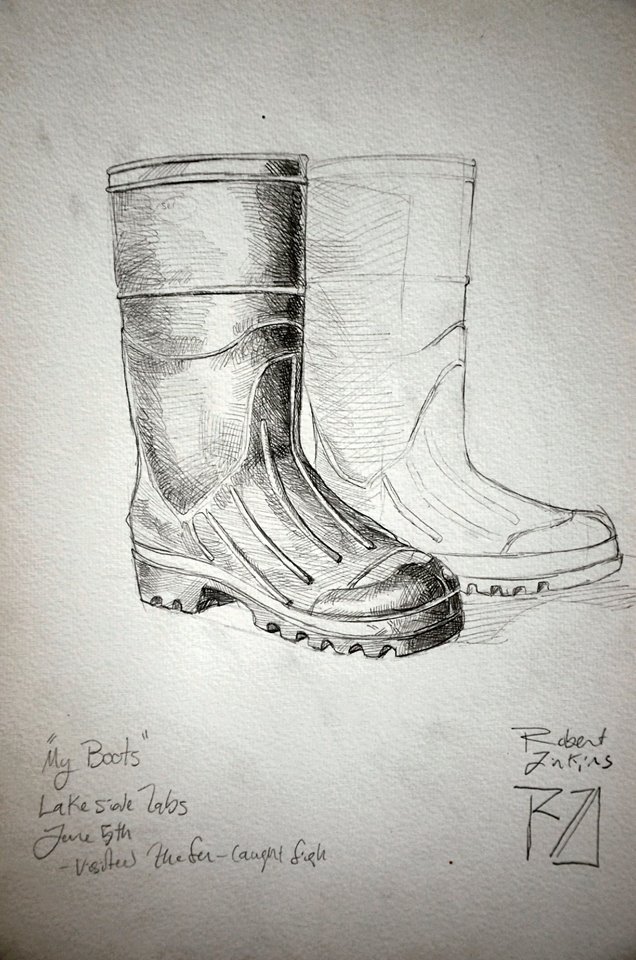