After an amazing first week, the second week started out with a bang as I became even more deeply embedded in the ecology of the Lake Okoboji region. The highlight was having an incredible opportunity to experience the multitude of micro/macro relationships that exist in the natural world. This included learning, through direct observation, about the expansive ecosystem of a Bald Eagle in contrast to the microscopic environment of diatoms. 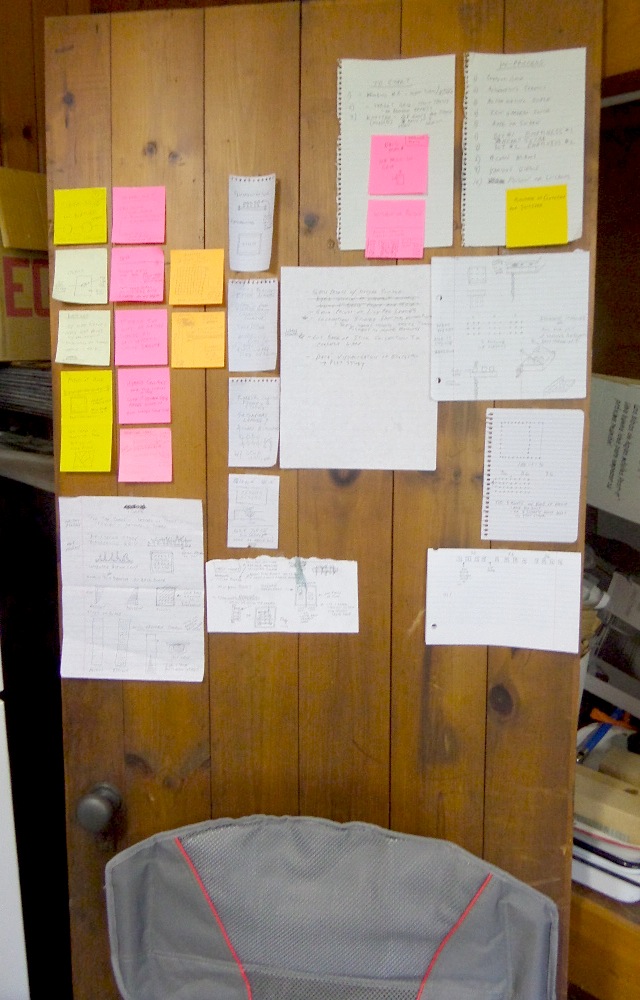 It all started on Friday with a wonderful symbiotic relationship between the students and artists-in-residence. I was asked to join the ecology class on a canoe trip down through the canals off of West Lake Okoboji. The purpose was to aid the students with a real-life study day for their upcoming test. So, myself and the other artist-in-residence acted as students and the students acted as teachers. Therefore, the students had to teach us about the ecology of the lake and canals at certain hotspot learning locations. I asked a lot of questions and learned a lot in return from the students. They are really fantastic. Our first location was floating underneath the bald eagle nest in Miller’s Bay. Here, we learned about the food chain, predation, habitat selection and the effects of human interaction within this ecosystem. At another point, deep in the canals, we leaned about algae, duckweed, wood ducks, spiragyro and red-wing blackbird nesting habitat. And, at another point, in a residential area of the canals, we learned about the purple martin, it’s community nesting habits, invasive species like house sparrows (they build their own nests in the purple martin houses) and roles of the male and female during mating. On our way back, we stopped at a beach and everyone went swimming. It was freezing, yet refreshing after canoeing several hours. There, we learned about water temperature and how quickly it changes from surface to bottom. Some of the brave students swam out to test the temperature at varying depths and confirmed that it was warm on the surface, but increasingly became colder as the water became deeper. 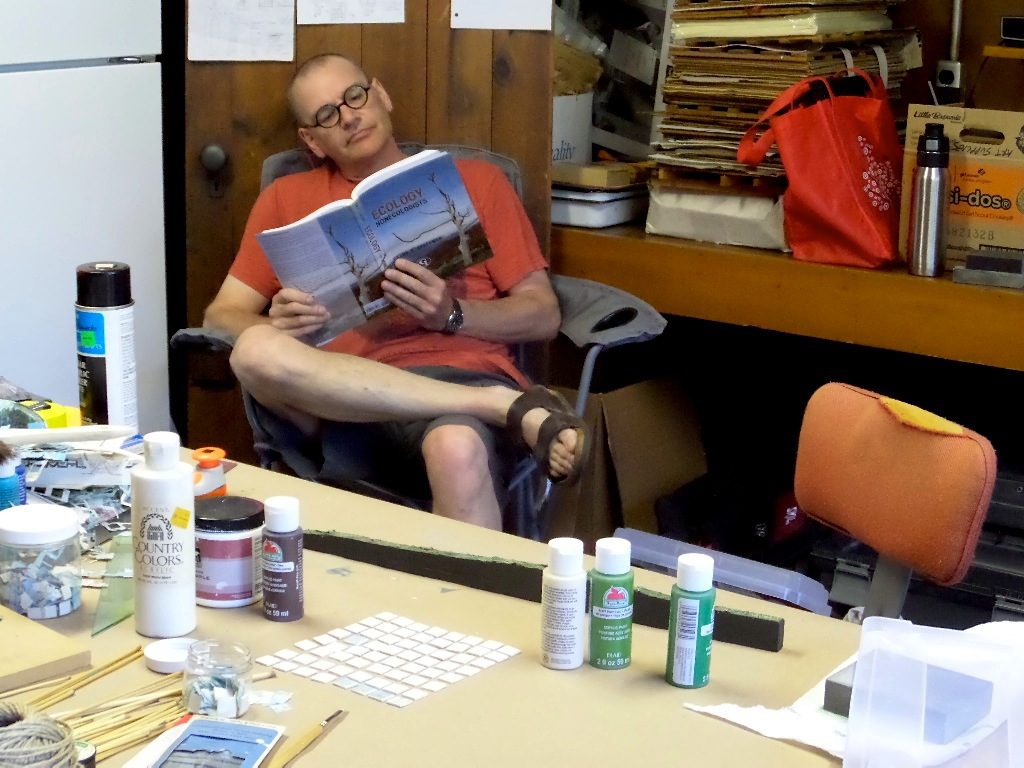 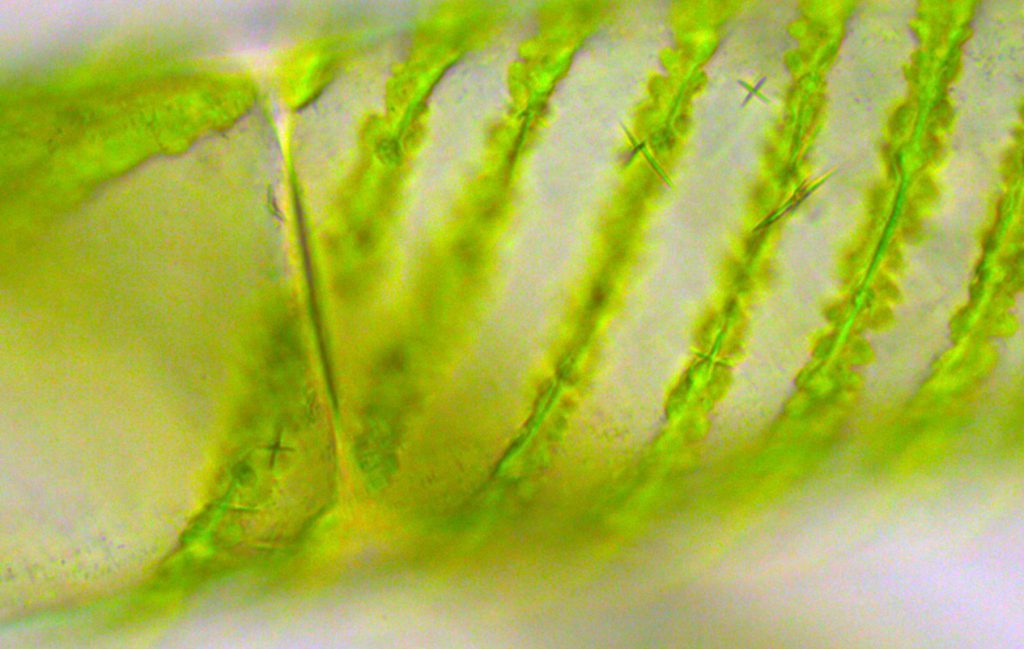 On Monday, the macro-scale world of birds and bodies of water was contrasted with the micro-scale world of diatoms (single-celled algae). I visited the diatom lab and was fortunate to be able to use a high-powered 1000x microscope to really see the details in the diatoms. 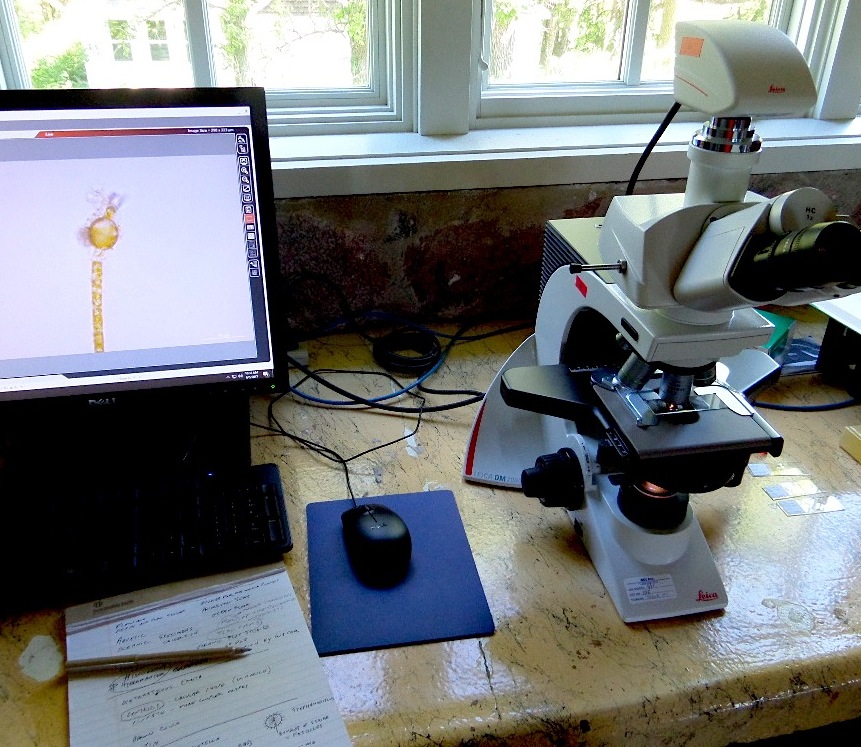 Last week, I worked extensively with circular cut-outs, so continuing in that formal territory, I decided to alter an earlier idea for an artwork to include a grid work of centric (circular) diatoms. I began by looking at prepared slides of these centric diatoms. Immediately, I was entranced with this mind-blowing world with a world relationship. Here, single cells had their own ecosystem, food chain, predation concerns, food needs, etc. In fact, I learned that diatoms are essential to the beginning of the food chain¬—single cells eventually are responsible for supporting invertebrates and ending up with higher-level vertebrates. This interdependence of all organisms is really put into place when studying diatoms. I viewed two species: Cyclotella and Stephanodiscus. From the Cyclotella, I learned about its silicon ribbing called “costae” and from the Stephanodiscus I learned about “striae,” which made up of a series of “areolae” and their bundling called “fascicles.” These physical qualities end up creating beautifully symmetrical designs that I previously saw in the mysterious illustration work of Ernst Haeckel, a 19th century German scientist and artist. Back then, I just didn’t know that I was looking at diatoms. Now, I do! Plus, during my diatom research, I was also introduced to another 19th century German artist, Adolf Schmidt, who published a beautifully rendered book of diatoms called Atlas der Diatomaceenkunde. 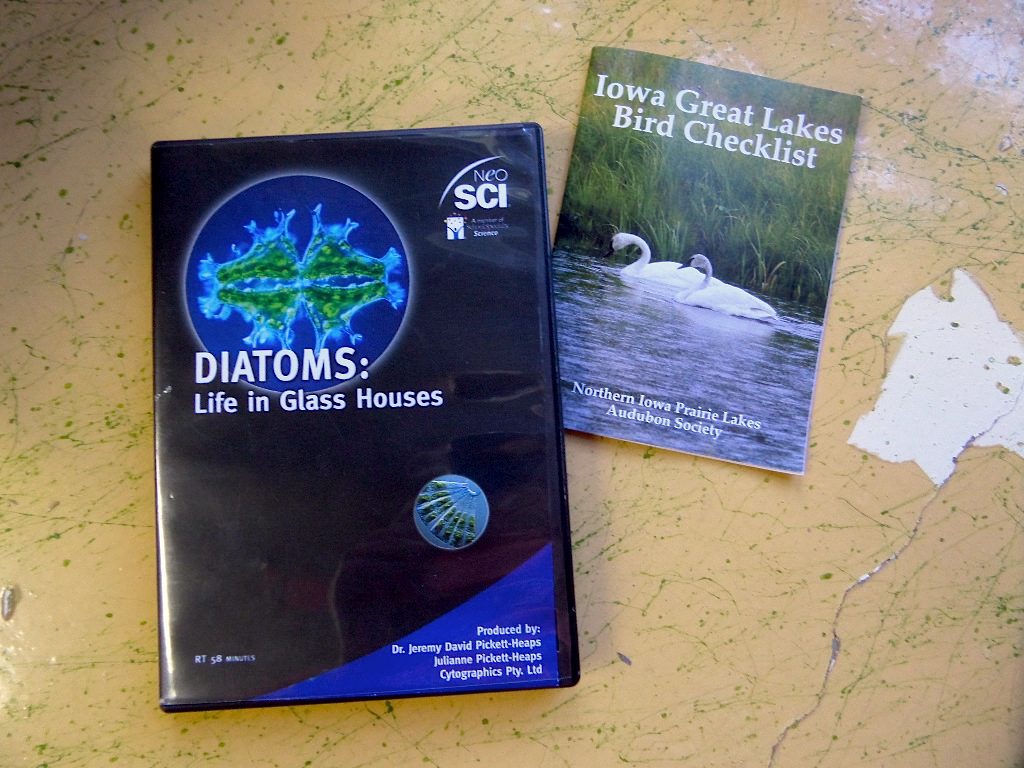 After a few hours of examining prepared slides, I wanted to see some living diatoms, so I went back to my studio and returned with a lake water sample. I prepared a slide and was astonished at the degree of life carrying on at this microscopic level. Incredible! Under the microscope, I saw a variety of living diatoms, other protists and protozoans. 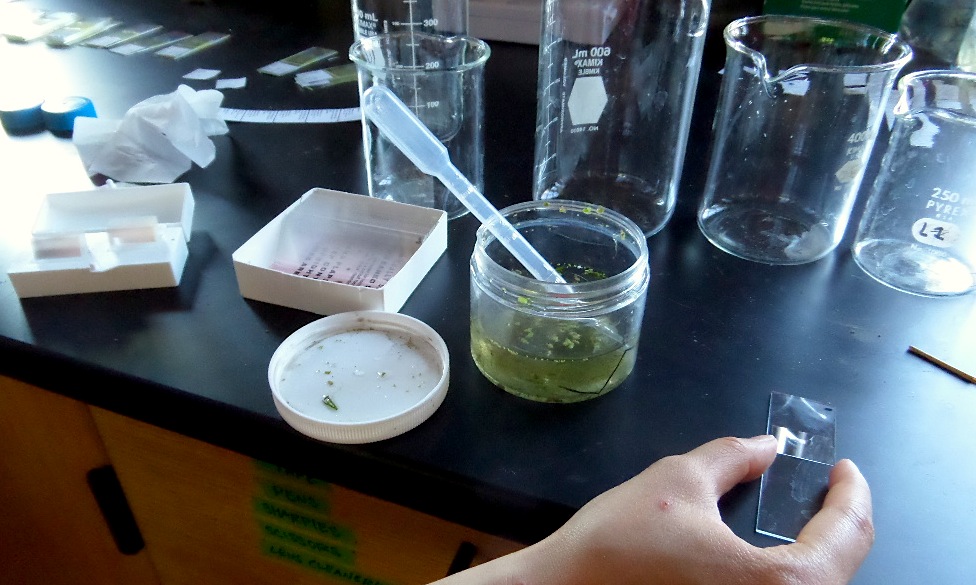 Not only did I find a number of centric diatoms, but many other large, bilateral diatoms. Two observations were of note: 1) a rare example of a living diatom undergoing cellular division (interestingly, the new cell is much larger than the parent cells); and 2) a large population of bright green euglena with a red eyespot and a very fast moving flagellum. 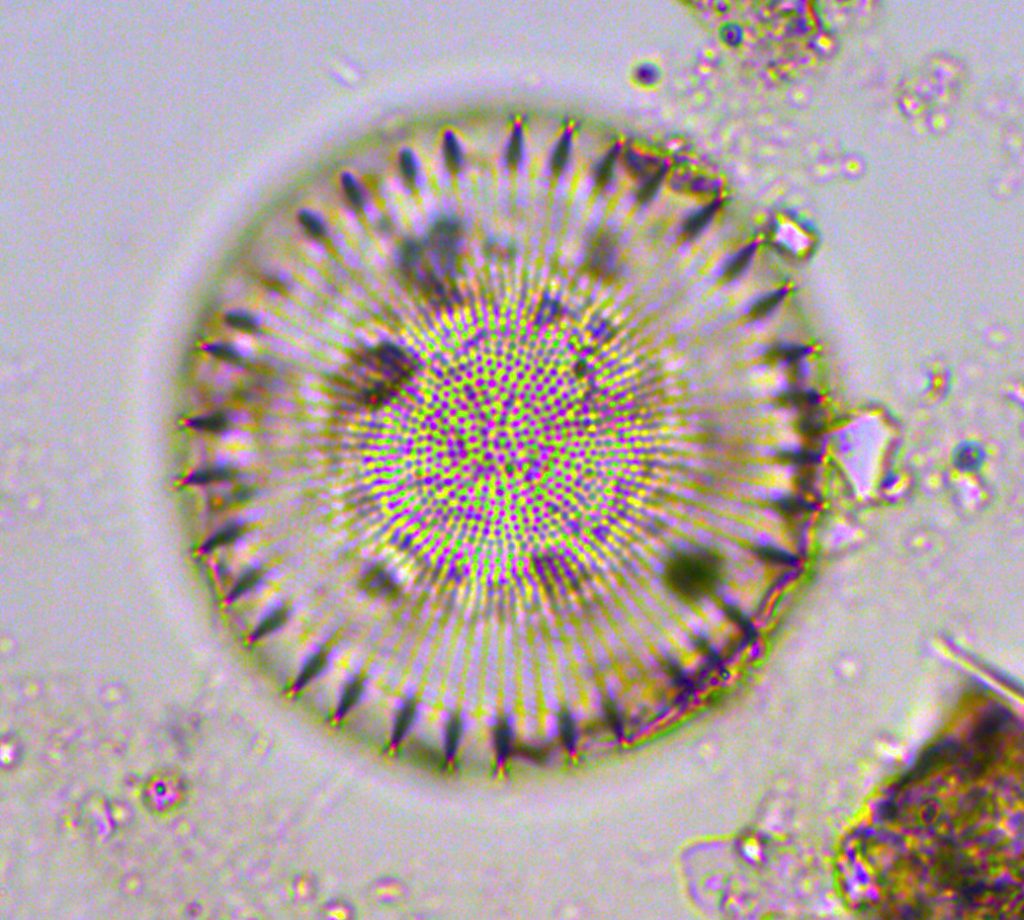 I also got a microscopic view of living spiragyro that I had seen floating in bright green blobs last week in the canals. It’s been many years since I looked through a microscope and times have changed, so I was excited to easily capture digital images from the scope and view them much larger on a computer screen. Over the weekend, in the studio, I worked on a number of pieces and began some new ones. I brought a piece to complete called “Various Views of a Midwest Landscape.” 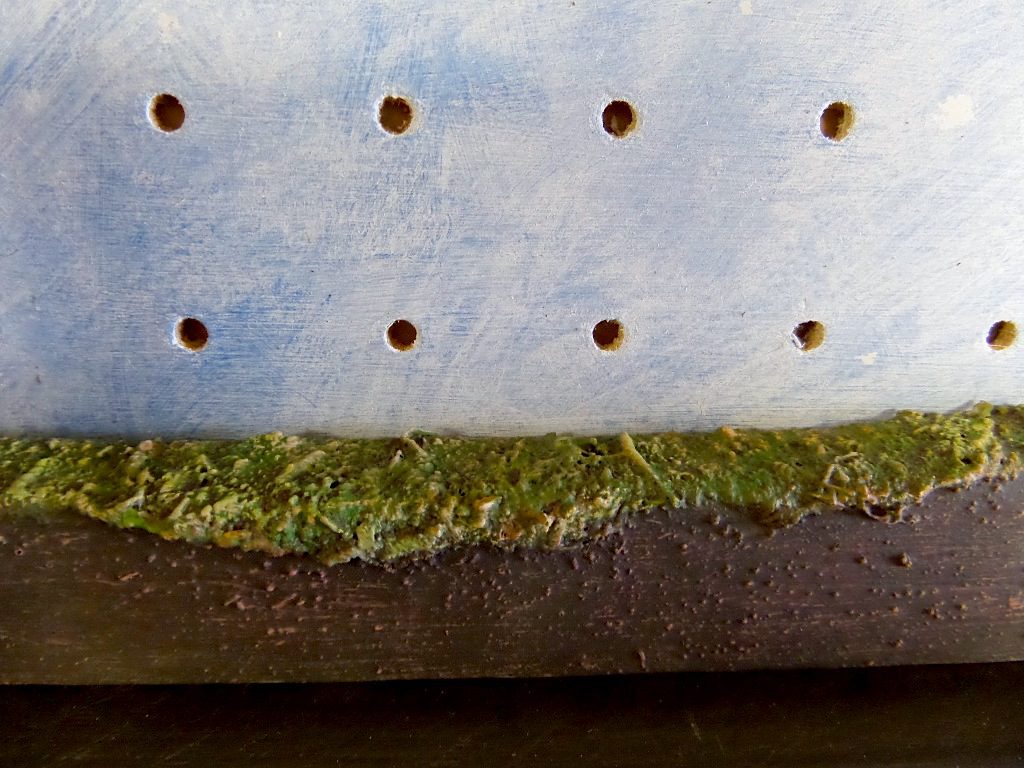 The piece was highly influenced by my time on the prairie, so I repainted the sculptural surfaces of a landscape section of the piece. It is made of soil attached to a gently sloping piece of wood intended to represent a Midwest landscape. Fortunately, the topography was a perfect match to the Iowa landscape. I built up many layers of paint with dry brushing techniques to create a wonderful example of the grassy prairie I am currently experiencing.

I also worked on another uncompleted piece called “Intercoastal Gap.” 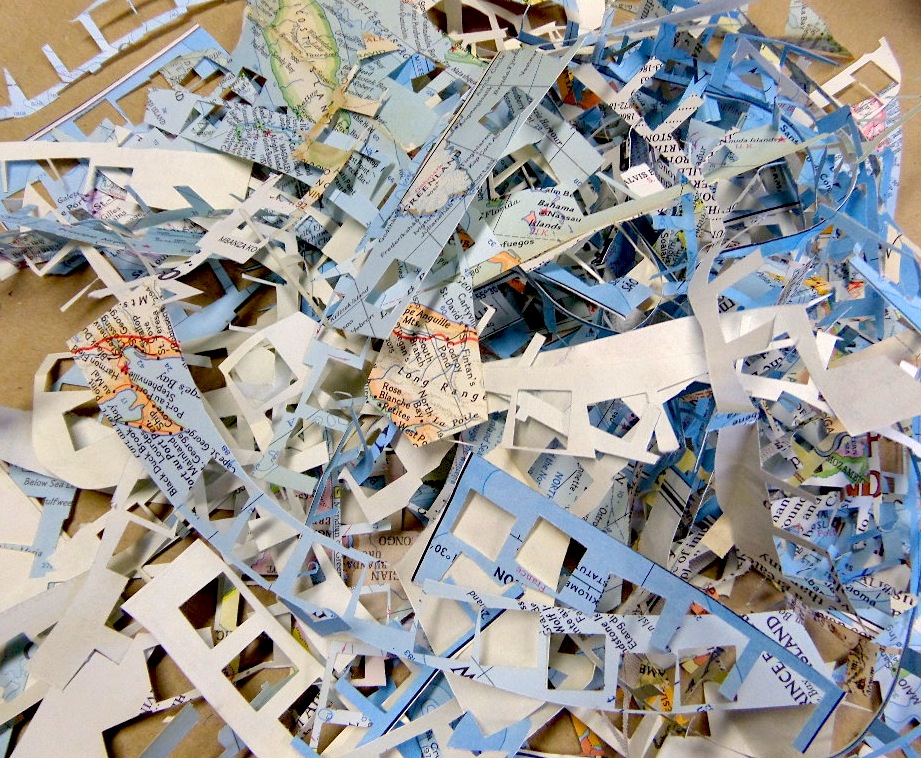 I continued to cut out more 1/2” squares of water from old maps. After several days of tediously cutting out the squares, I realized that they were inconsistent in size, even though I was using a metal ruler and x-acto knife. They did not align properly on the wood, so I had a problem to solve. I found a slightly smaller square, cut-out punch in my supplies and, with testing, found it to be consistent in size and they all aligned perfectly on the wood structure. So, throughout the weekend I punched out many more square water map fragments. I now have enough to start collaging them onto the wood.

Although the early cut out squares were imperfect, I decided to embrace that quality and work with them as they are. So, this seemingly trashed material was now the impetus for a new work called “A Hydromancer’s Notebook.” I collaged the water map squares onto similarly sized pieces of thin wood and arranged them in a grid pattern. Then, I introduced a scientific presentation aesthetic by attaching the squares to an old leather book cover with #3 specimen pins. The support material is homosote, therefore, the pins stick in fairly easily, although I will have to drill holes through the book cover for each pin. Some coffee-stained, gridded notebook paper fills in the background. 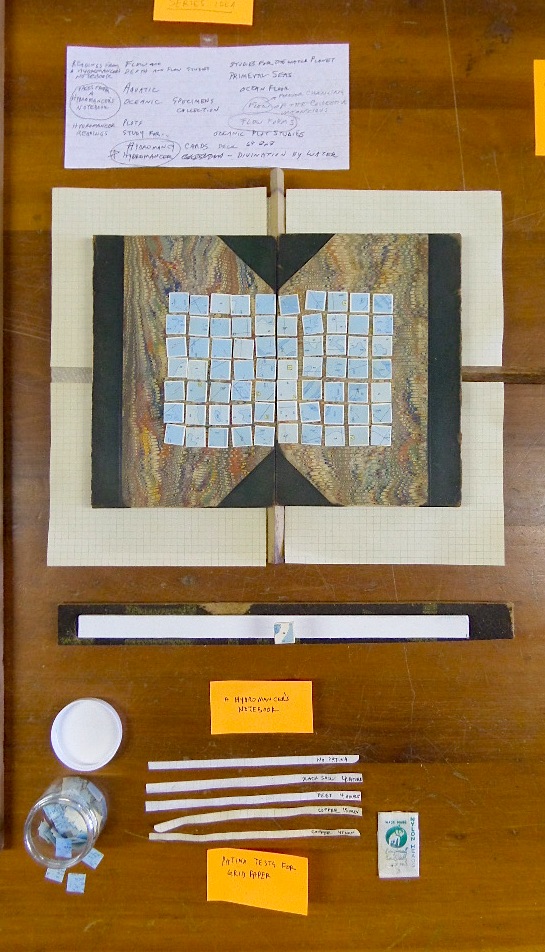 On Saturday, I went out into the field to collect insect galls from goldenrod plants. I have an idea for a new piece that uses galls with bored insect holes aligned in a grid pattern. I took out two buckets and determined that I needed to fill both to get about 100 galls. The weather was stormy and unpredictable. I waited for a while after hearing some thunder and, then, went out in the afternoon, still unsure of the weather. I found very few galls in the beginning, and not enough, so I hiked further into the prairie. I noticed that many of the dried galls had begun to fall over below the grass line, making them difficult to see. Eventually, I found a huge stand of the galls and collected two full buckets, but not before it began to rain. The drizzly rain soaked me down as I collected the last galls and I welcomed it. I looked up into the vast sky, scanning the clouds, allowing them to gently massage my face with random drops. The odor of the land perked up from the wetness, leaving a musky, life-filled smell in the air. Before heading back, I saw a huge leopard frog. I tried to catch him, but missed. 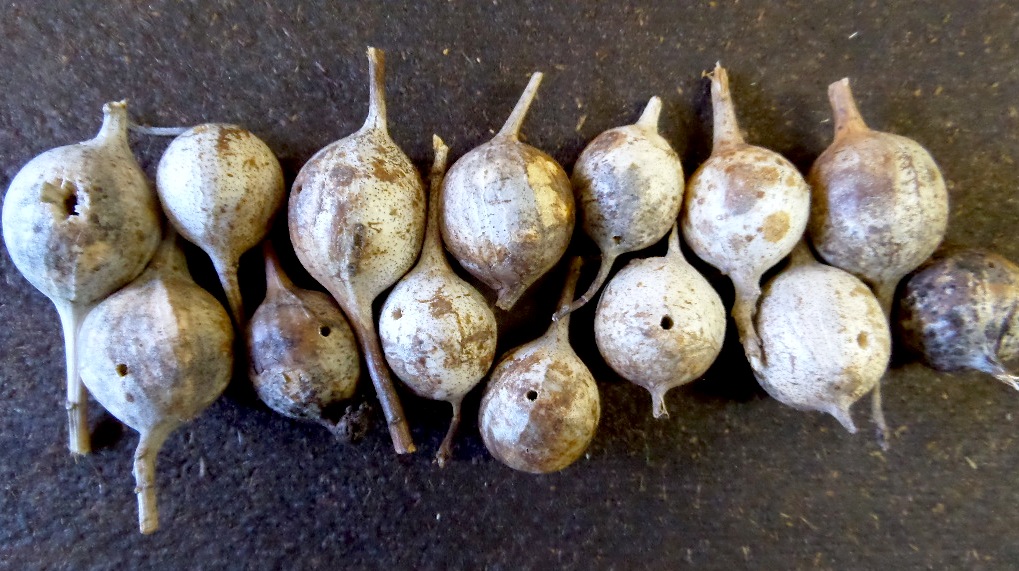 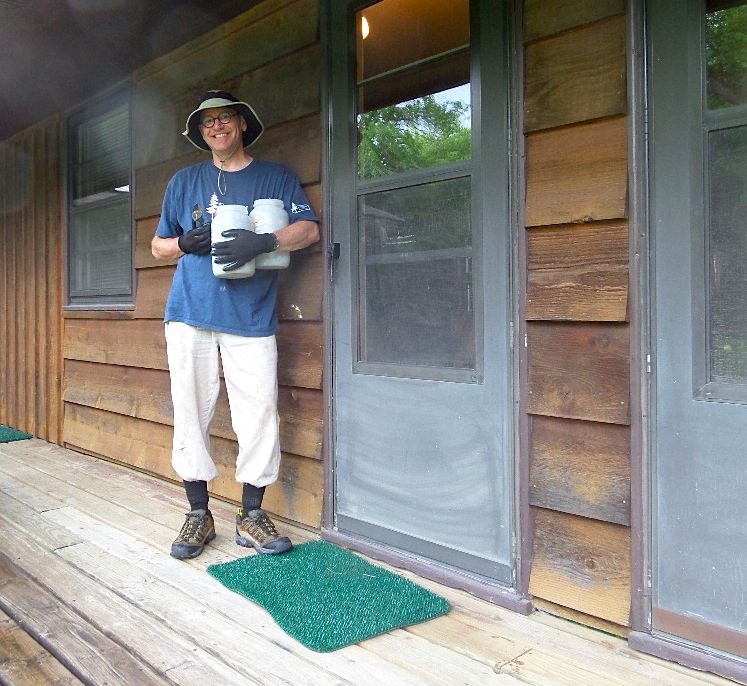 While continuing to work on the pieces mentioned above, during the week, I also began preparing dried plant material that I collected during my first week. An assortment of grasses and other plants were cleaned, stripped, husked of leaves and ready for use in new work. This material will be used to create a series of conceptual blanket works based on the notion of nature/nurture that I mentioned last week. 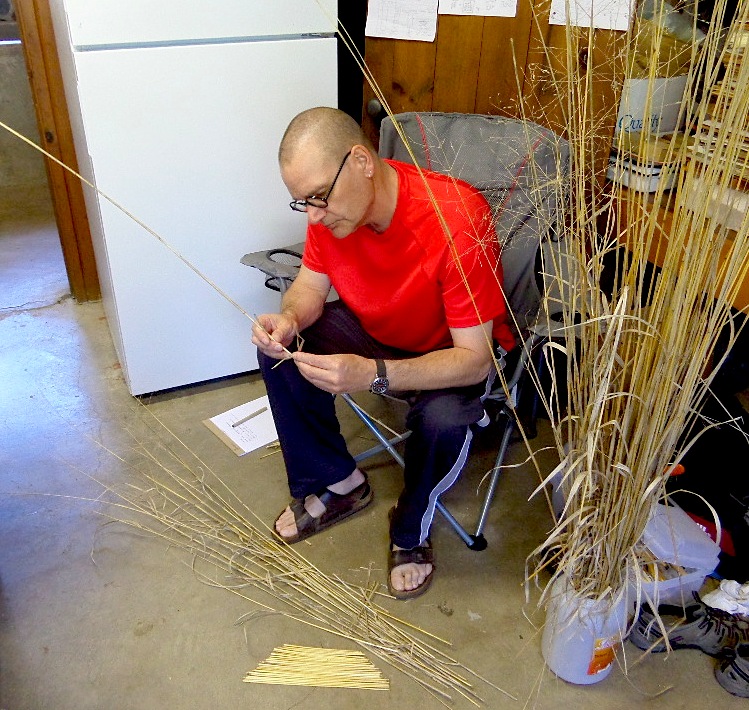 For several days during the first part of the week, I examined the hundreds of insect galls that I previously collected. They were sorted out based on if the Goldenrod Gall Fly had successfully bored its way out of the gall or not. My findings showed that about 50% of the galls had holes, displaying the successful emergence of a fly. I also noticed that most of the holes emerged from the middle of the gall, while fewer others emerged from the very top of the gall. Lastly, I observed that the holes were a perfect circular opening, except for a few. These appeared to have been pecked at, widening the hole and destroying the perfect circular opening. I concluded that these galls had been invaded by birds searching for food and the marks left behind were from the beaks as they tried to reach the fly larvae.

During the end of the week, I prepared the back boards for “A Hydromancer’s Notebook” and a new piece using sedges called “Alternating Sedges.” 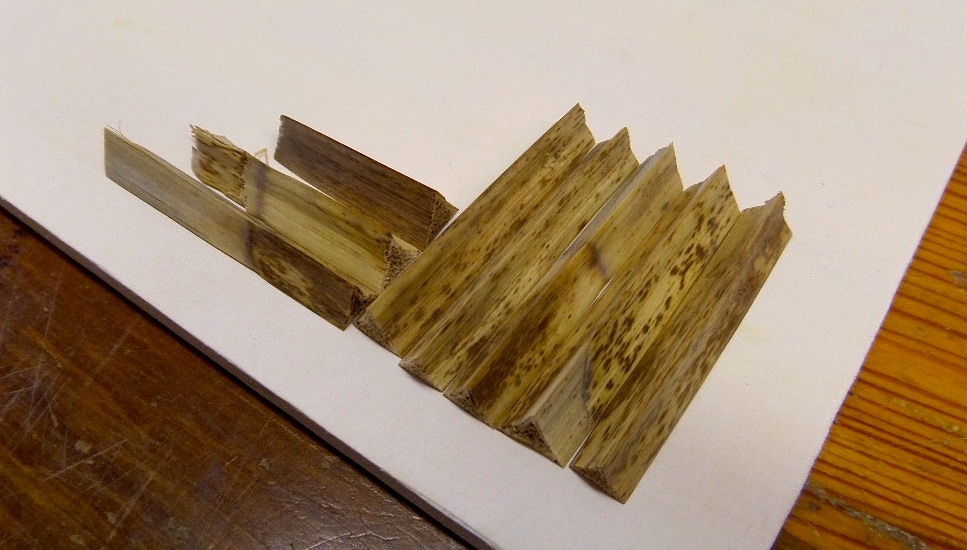 “Alternating Sedges” is a long horizontal piece with a white board background filled with a 2” graphite grid system. Each square of the grid will have a number of triangular-shaped sedges that fit within the 2” square. The direction of the sedges will alternate from horizontal to vertical for the entire piece, creating a non-dual, middle-zone, like that of the Middle Way teachings in Buddhism. I intend to continue this idea with other materials like grasses, sticks and other plant stalks.

On Wednesday, I worked on “A Beginner’s Compendium of the Animal Kingdom” which I started last week. Unsure if I had have enough wood to mount all of the 1” circle cut-outs, I decided to rip each 2”x2” board in half. Then, I was able to double my material and more accurately determine how much is necessary. I also tested an idea to inset the 1” circle cut-outs by drilling a 1” hole, painting it black and gluing the cut-out within the hole. Then, white-washing the area outside of the circle. This worked great and provided an added level of depth and interest to the piece. I also tested and determined the spacing between the circles, so that they are evenly dispersed as a grid. 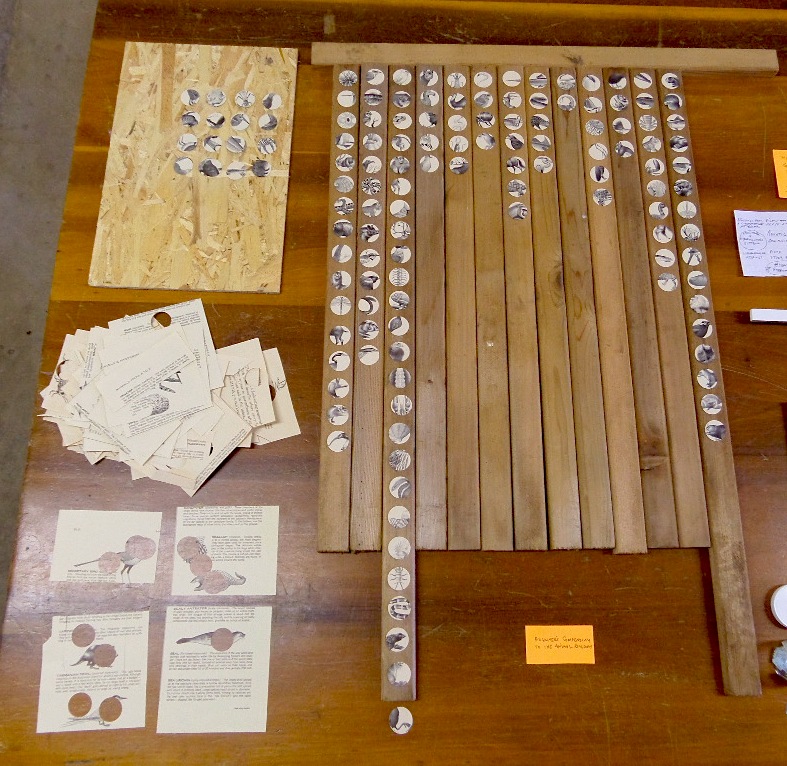 Nearly all of the day on Thursday was dedicated to preparing for the Open Studio event later in the evening. My work was located on the tables in the large main area as well as throughout my studio space. Since no work had been fully completed, I decided to illustrate and enhance the process of making art and how it is similar to scientific inquiry. So, I made labels for each piece with its working title. I also added labeled examples of the natural material selection and preparation process, experiments for paper dyeing and natural pigment-making, specimen mounting techniques, conceptual and technical notes and sketches, as well as, raw materials for unknown future pieces including a cicada casing and robin egg shell fragments. The Open Studio event was well-attended and a great success. I was able to share my expanded and improved terrarium setup and actively engage the faculty and students with my work, especially the highly participatory piece “A Beginner’s Compendium of the Animal Kingdom” where everyone tried to guess the animals from selectively cropped images. 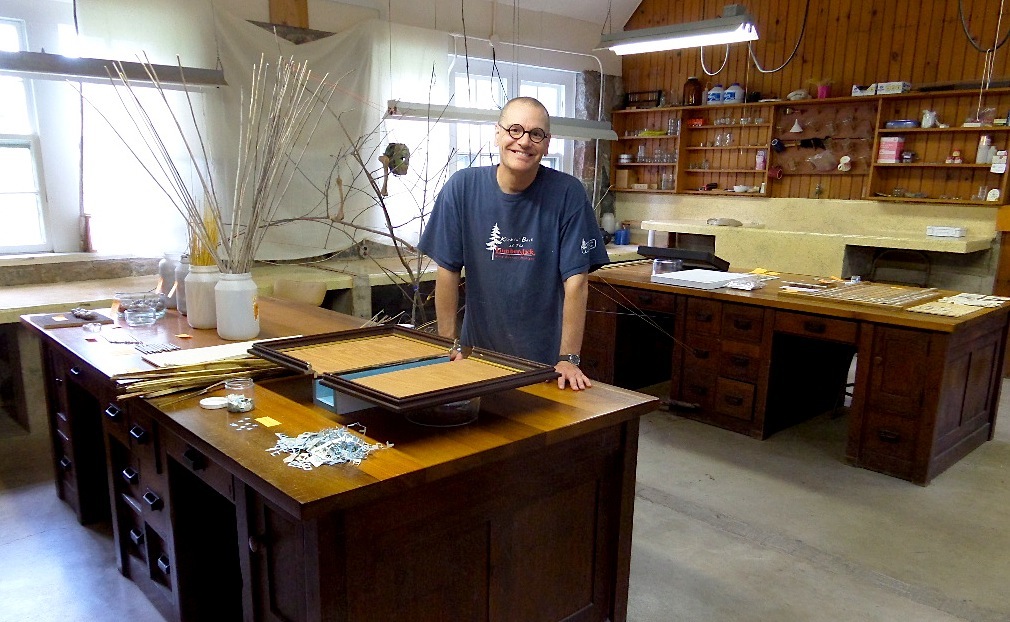 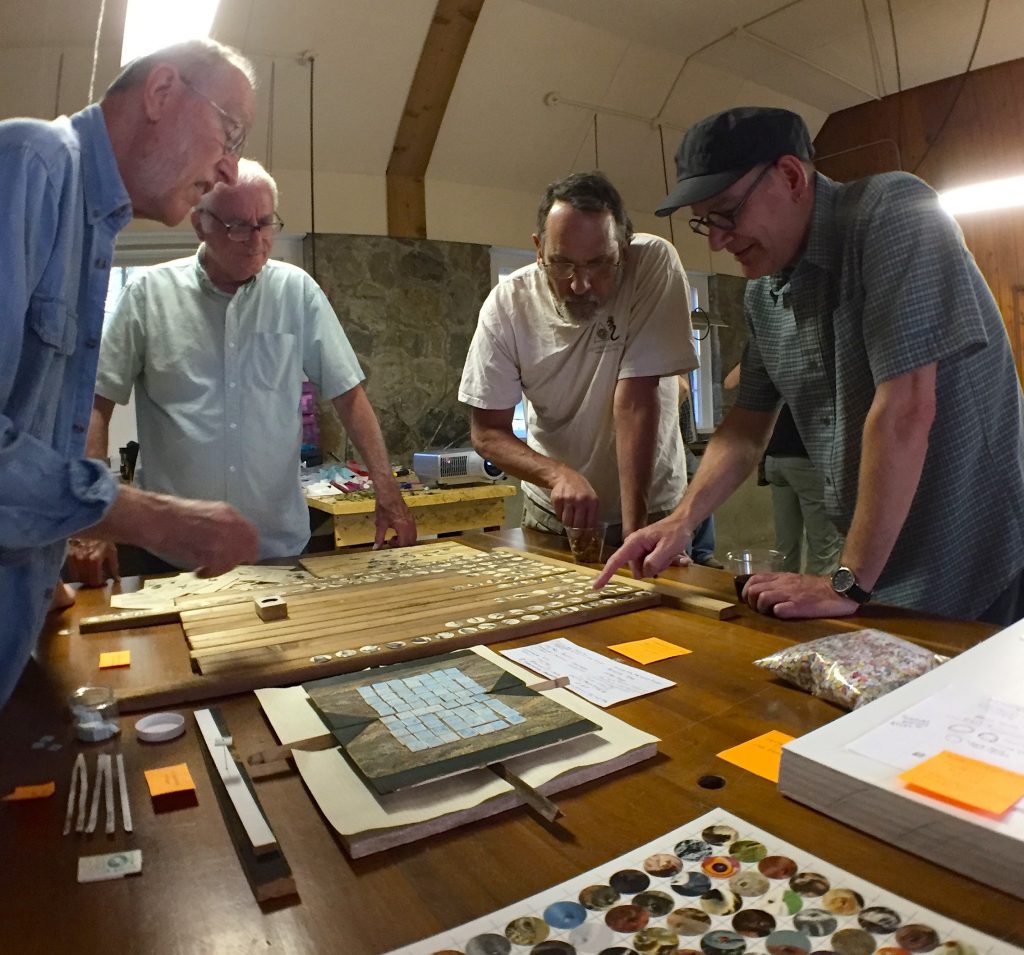 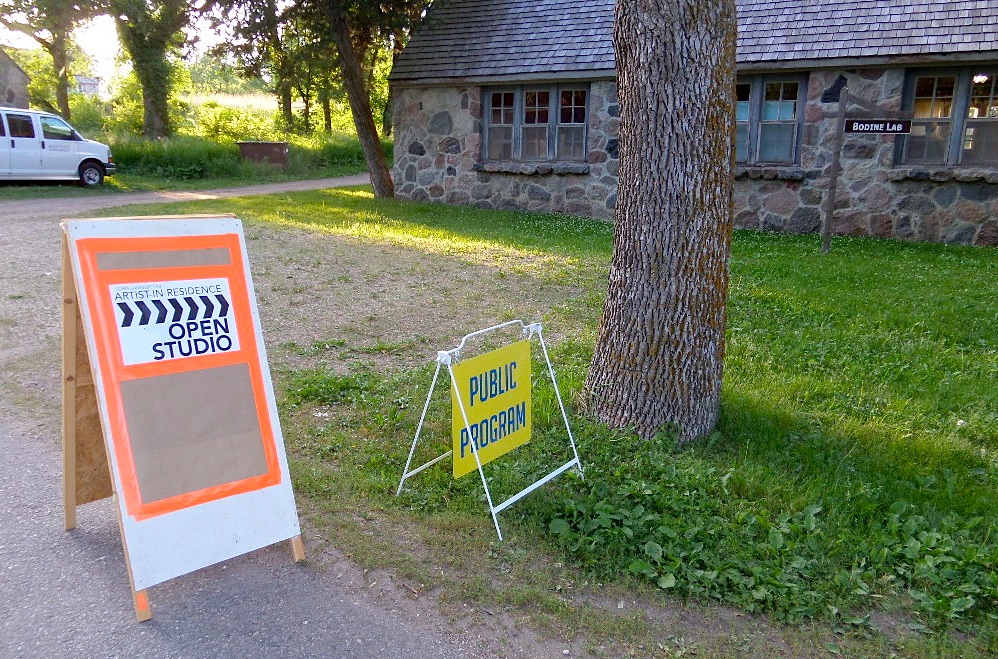 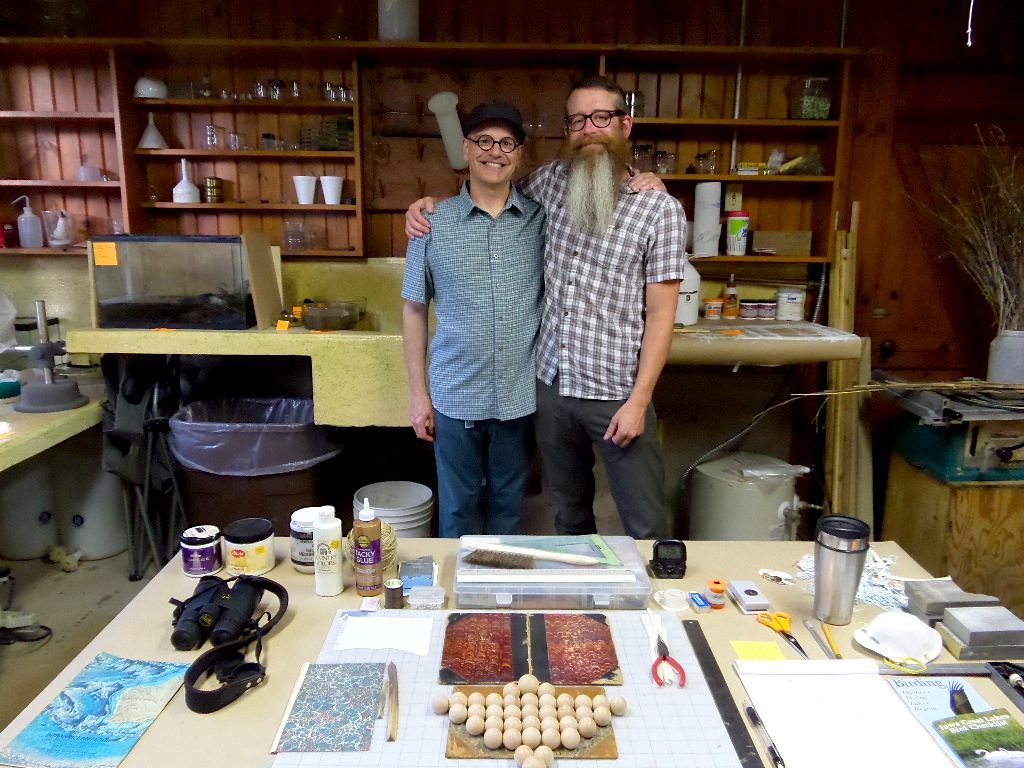