WEEK 1 Report: Reigniting the Wonder Lamp of the Natural World

Upon arrival, I explored all of the labs and hiked the trails on the property to get a sense of where I would be living and working for the next month. Immediately, I developed a sense of place that felt like home. Home, in this case, is primal and natural. It’s a place where one feels like a part of something larger, something complex while seemingly so simple, chaotic yet orderly, magical and often brutal, but in all cases, a sense of interconnection. I experienced the diversity of the landscape within 147 acres. Dense forest and foliage, large lakes, spotted and vibrant marshland and the ever present endless expanse of prairie grass and rolling hills. Spring is a time of birth and renewal, so this reminder was everywhere—from the contrast of last year’s old growth of blue stem grass to the sprouting new and the wide open mouths of red-wing blackbird chicks crying for food. These are just a few experiences that reignited my wonder lamp of the natural world. Curiosity and awe became the light I absorbed. 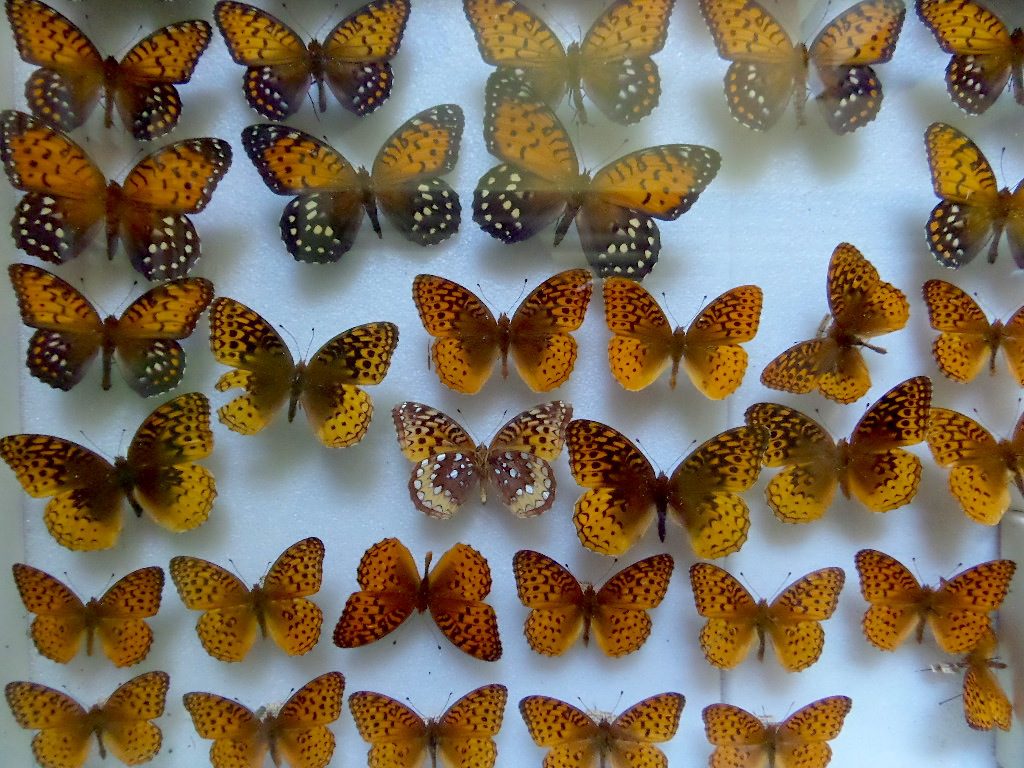 After exploring the property, I settled into my studio and immediately began working. I brought several collage source books to get started on something right away, so I opened one and decided to cut out 1” circles of every animal eye in the entire book. The piece evolved into a tight, square grid of 100 eyes from many different animals. With an interest in grid systems and perception, this was a good place to start. The circles will be collaged onto a piece of masonite painted white with a penciled grid of 1” squares where each eye will be placed. The piece is entitled “Assorted Animal Oculi.” From here, I moved to another book and cut out 1” circles of selectively cropped examples from the animal kingdom. The images are arranged alphabetically, therefore, entitled “A Beginner’s Compendium of the Animal Kingdom.” The structural arrangement and support system are still being determined, but, at the moment, each letter of the alphabet has each of its examples collaged vertically down a 1” piece of wood and arranged from A to Z. Lastly, I examined the bird and insect specimen cases in King Lab, since my own grid structures are heavily influenced by scientific presentation techniques. This all happened during my first full day in the studio. I felt so grateful to have a space to work, inspirational natural surroundings and the support of Lakeside Lab’s scientific community of staff and students. 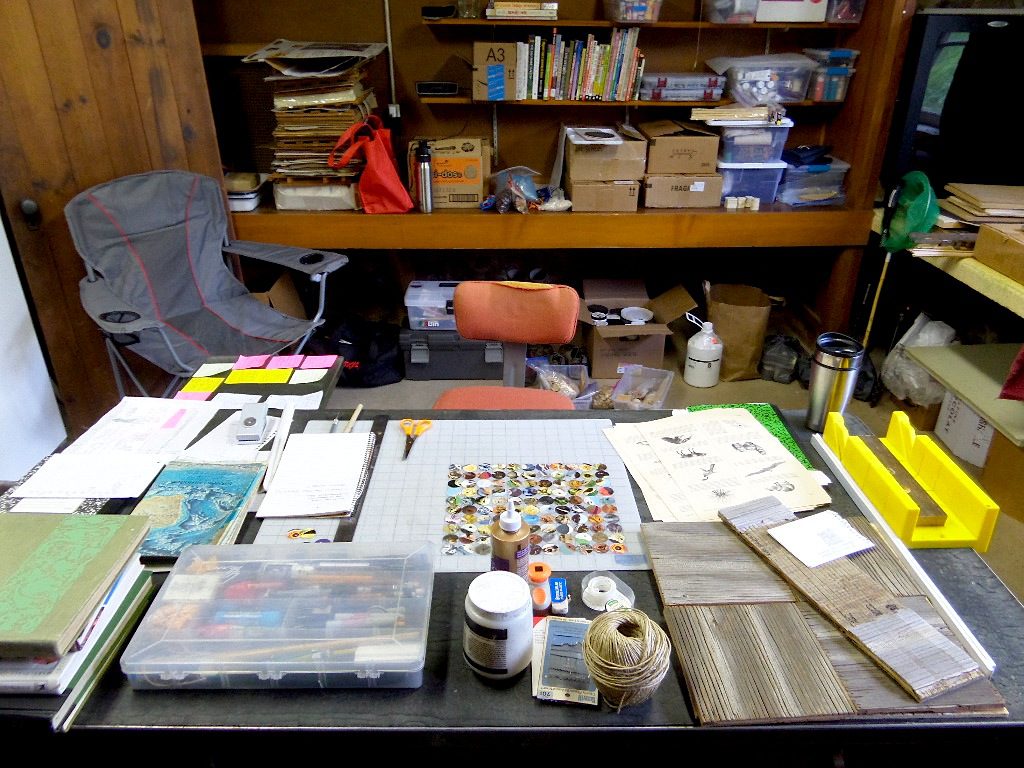 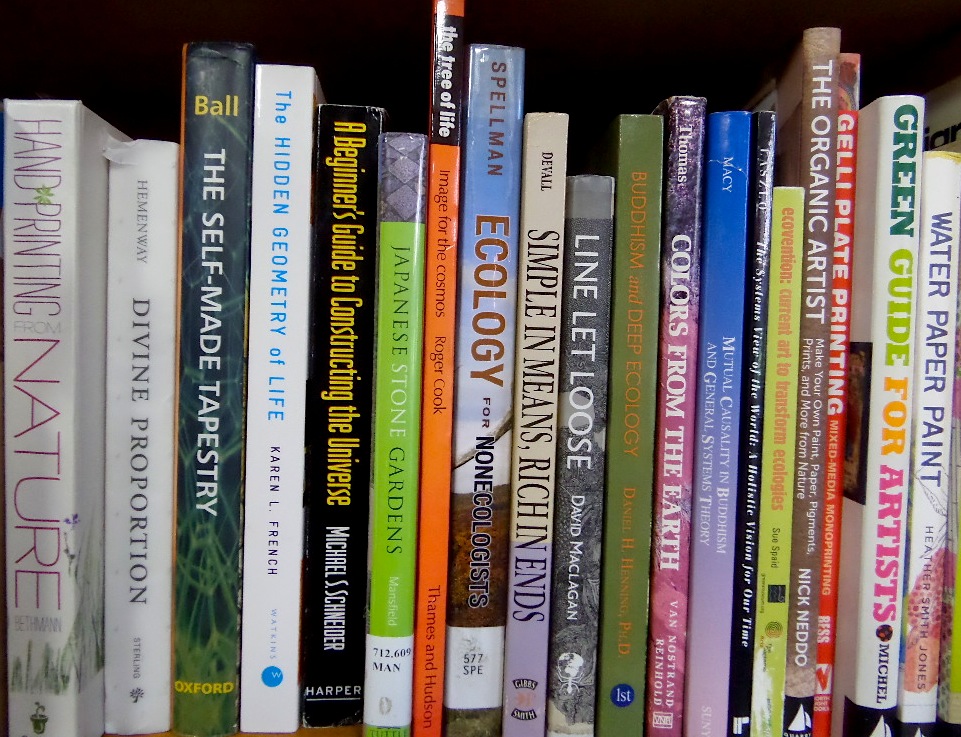 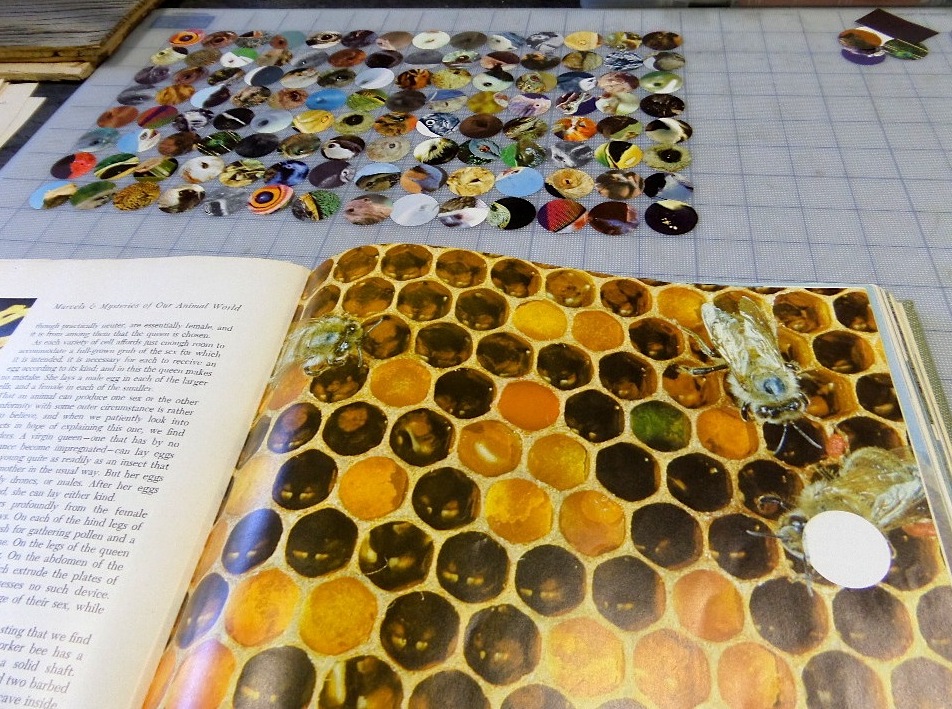 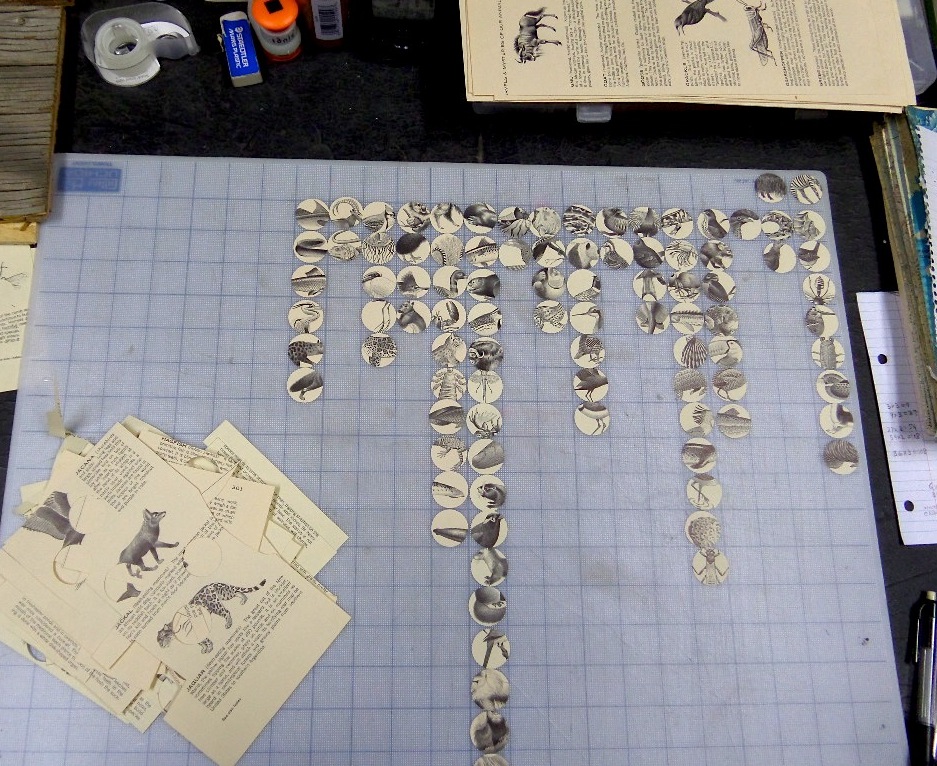 On Tuesday, realizing that I may not be able to complete the work I started on Monday due to tool constraints, I decided to gain some direct field experience and explore the prairie at Cayler Preserve with a botanist. We checked on previously flagged locations where a specific plant species was being studied for potential periods of dormancy. We found only 2 of 10 plants that had emerged this spring. We also identified a variety of other flowering plant species. Then, I stood up and took a good look around, realizing that this was the first time I ever really experienced the massive expanse of a prairie. Additionally, after a lifetime of lacking interest in this seemingly mundane environment, I was immersed in the vibrancy of a diverse ecosystem that demanded my attention and appreciation.

On Wednesday and Thursday, I spent the mornings in the field with the ecology class getting muddy and wet in the nearby marshlands. We set up traps for turtles, salamanders and anything else we might catch. I was excited to observe a yellow-headed blackbird at its nest as it squaked in gravely dissonant outbursts. Elusive to sight, but not sound, was a marsh wren protecting its nest. Some students with waders were able to locate it in the cattails. I also observed brood parasitism of brown-headed cowbird chicks in a nest with red-winged blackbird eggs. The following day we returned to check the traps and net and found a variety of creatures including tiger salamanders with external gills, frog tadpoles, a leech and dragonfly nymphs. We also caught a few american toads. I brought all of the creatures back to my studio and set up a aquarium/terrarium. I intend to use them with experiments in mark making and animal locomotion. 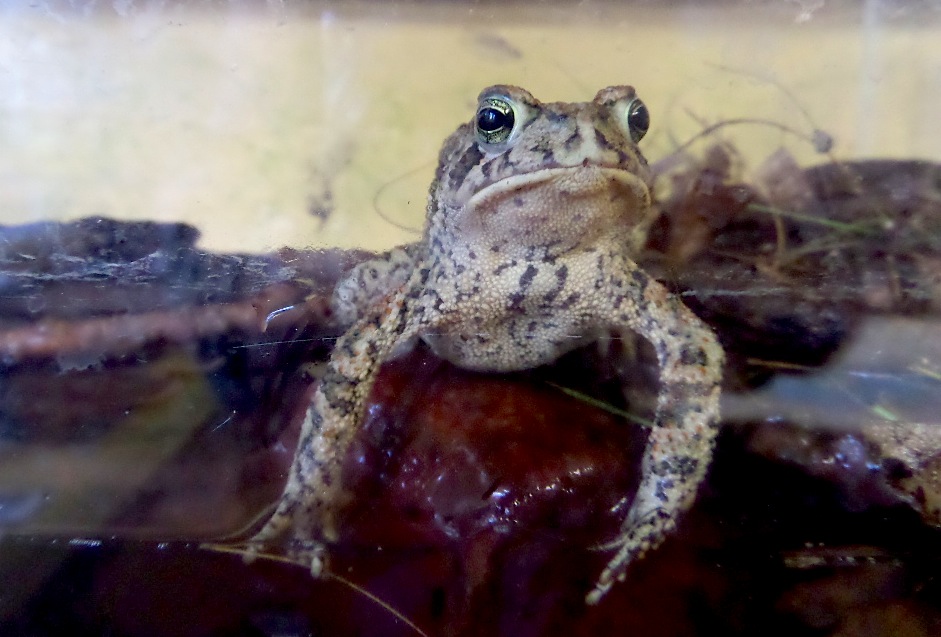 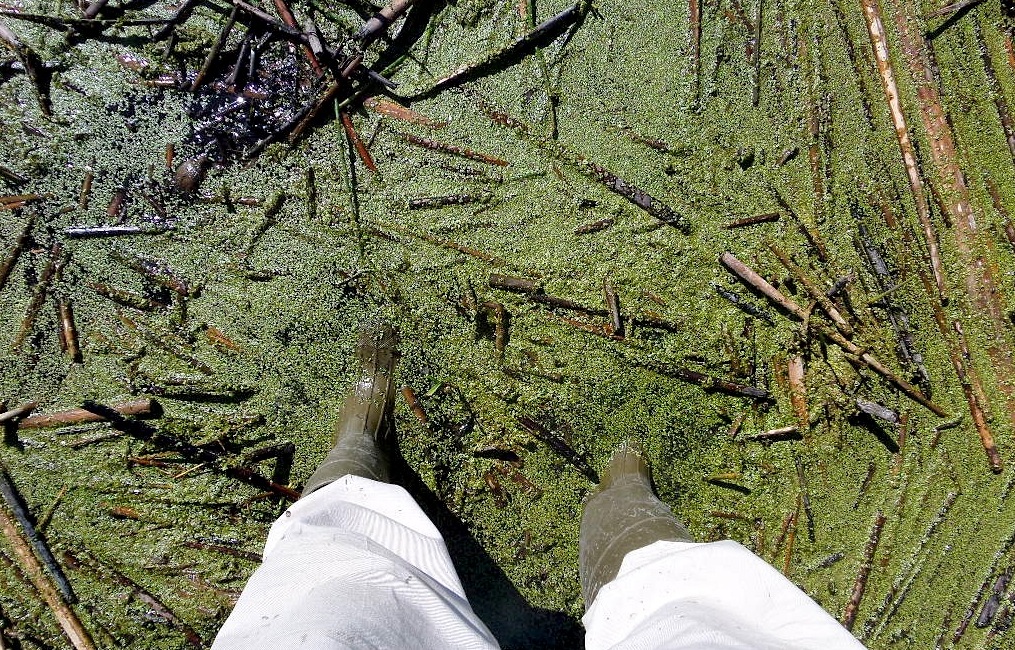 In the afternoons, I collected materials for new projects to start next week. I’ve collected a variety of old growth plant materials including blue stem grass, insect galls, reeds, cattails and plants with a square stalk. I will explore the raw materiality of these specimens while considering the notion of nature vs. nurture. I will start with the idea of making blankets with these materials using a variety of thread/needle techniques and drilled holes on larger, woody material. 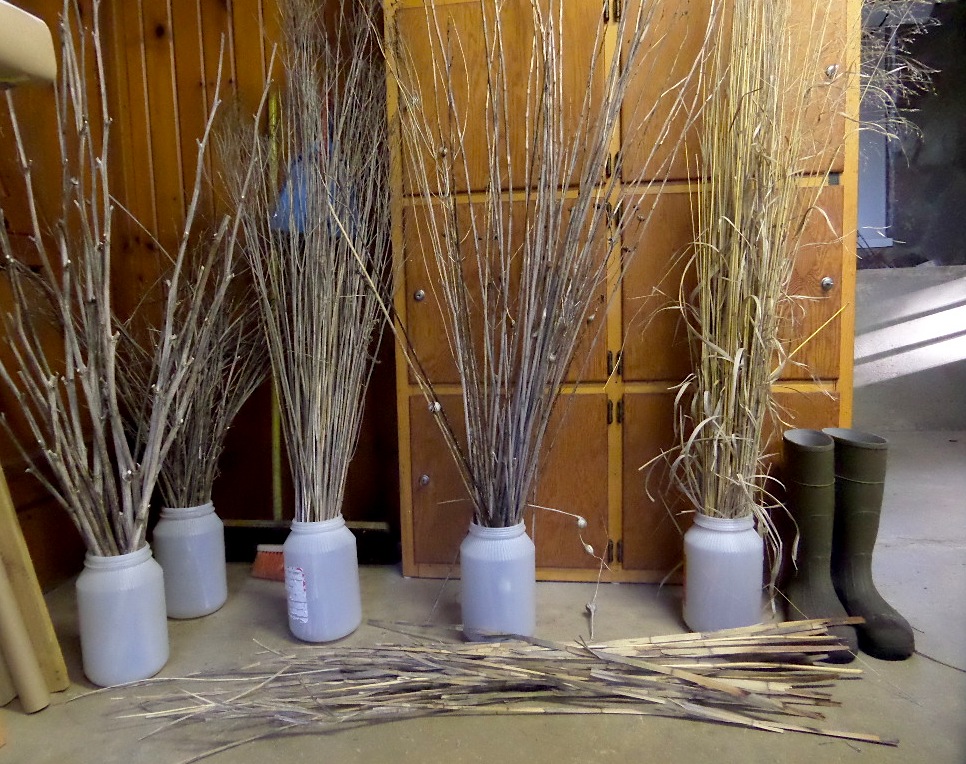 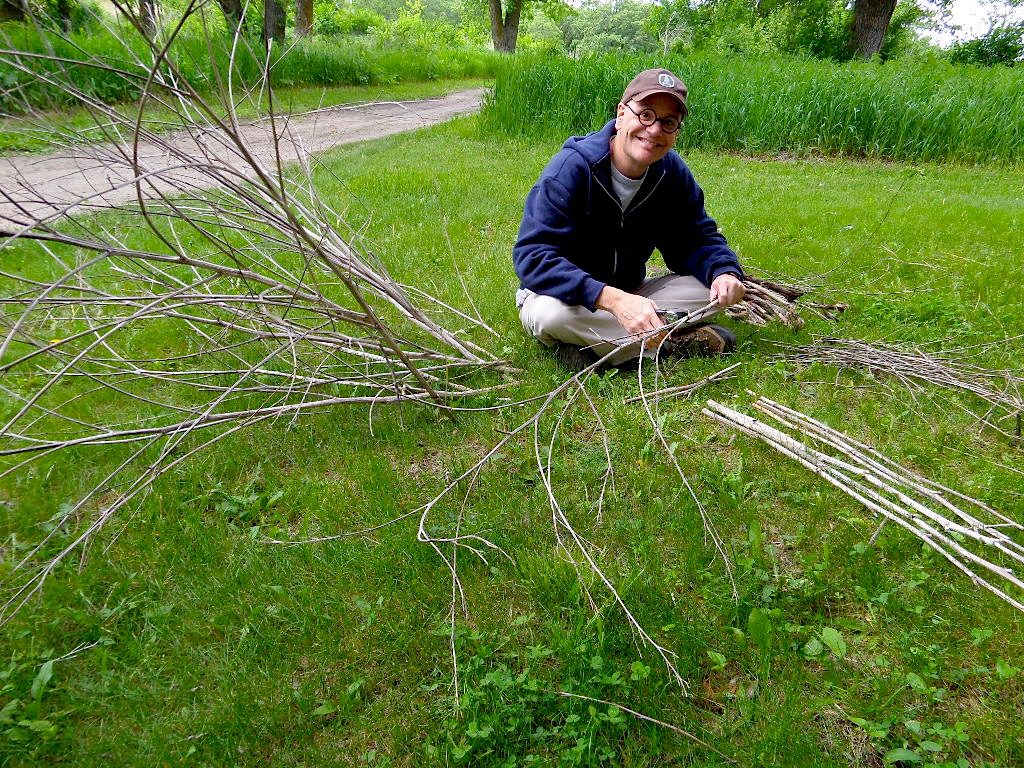 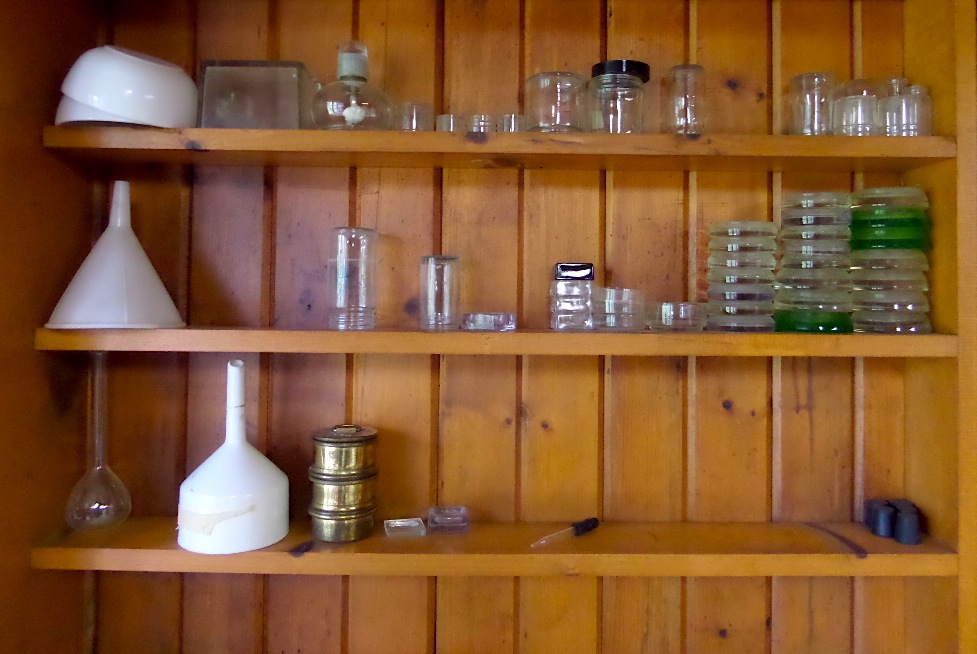 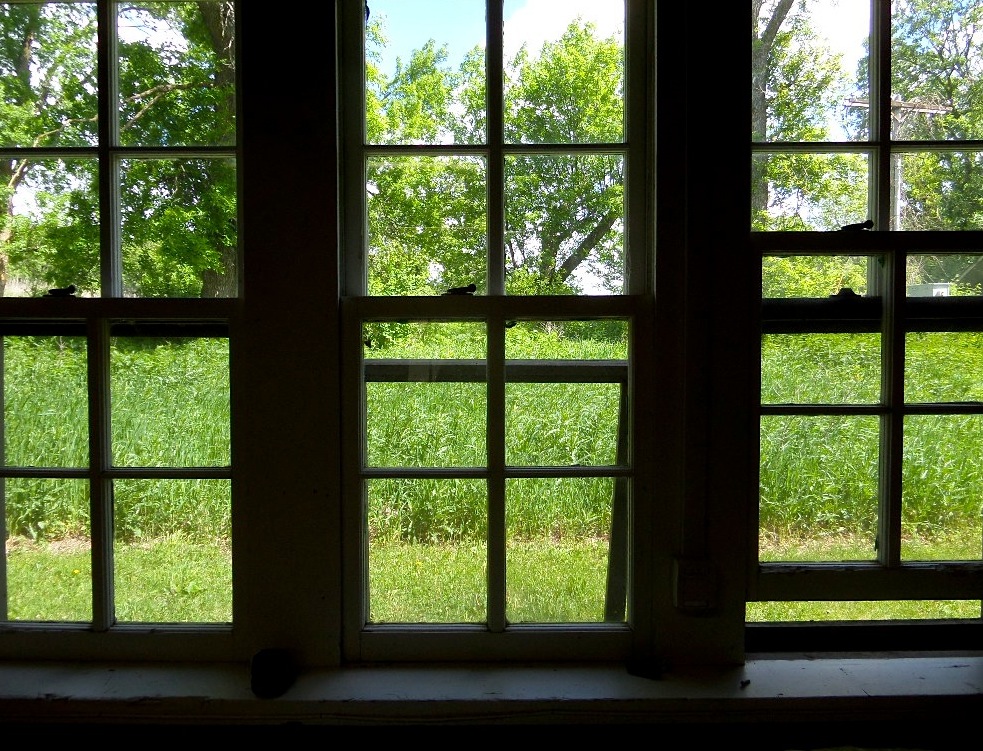 On Wednesday evening, I took my first kayak journey around Miller’s Bay. I prefer to travel close to the shore to see animals from a new perspective on both land and in water. The standout experience from this was observing the bald eagle nest with two eaglets. I floated directly below for some time, while the adult and young peered over the edge of the nest. The superficial observations provided a feeling of majesty, power and respect, while balanced by the most tender primal behavior of parental care. At the nest, I entered a small waterway where I observed a grouping of red-winged blackbirds defending their territories from an aggressive hawk. The red-wing blackbirds prevailed. 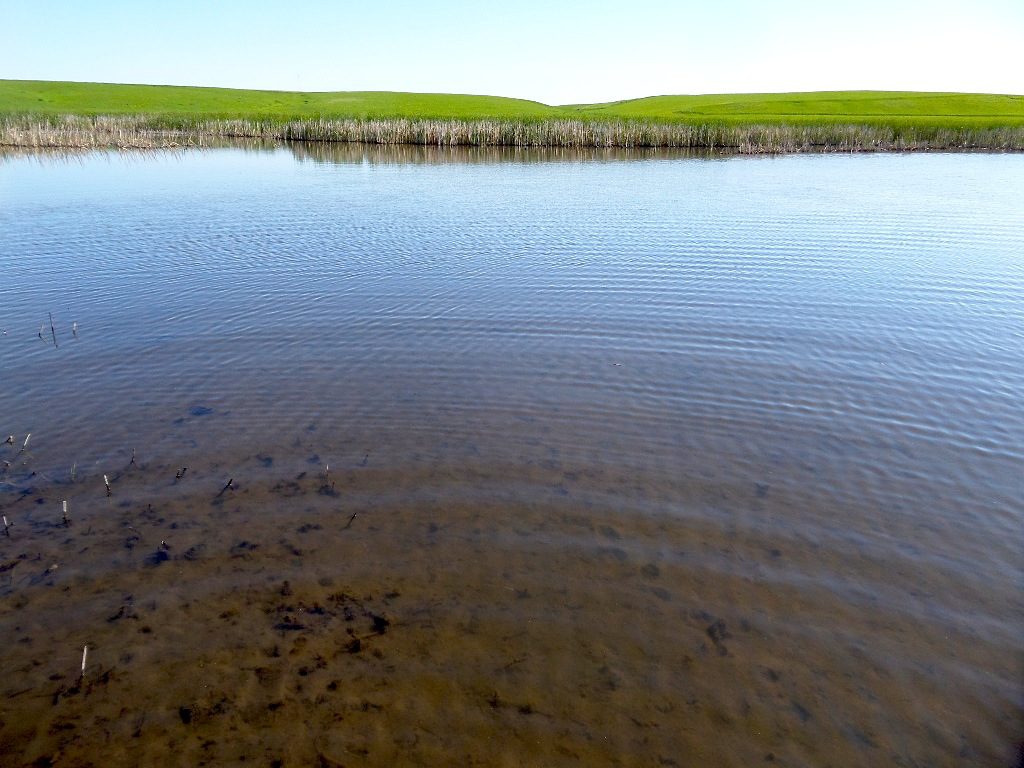 In the afternoons and evenings, I am also working on a few pieces that were started prior to the residency. I am currently painting wood pieces, cutting out 1/2” squares of water maps for collaging and applying earth to large pieces of plywood bound in a picture frame that has been cut in half. The piece is called “Intracoastal Gap.” In between the two fields of earth will be a gap of water imagery that sinks below the surface of the picture plane. This gap is not only a geographic characteristic, but one that references Eastern philosophy’s gap in thought where clarity can be found. I enjoy exploring both of these types of gaps. 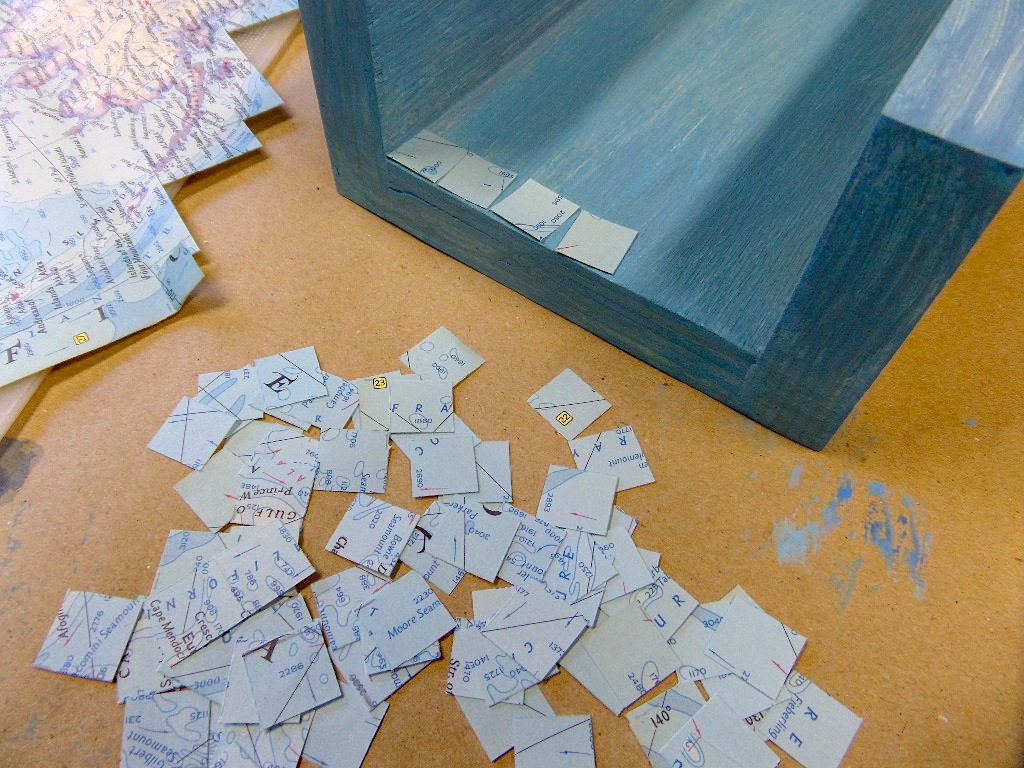 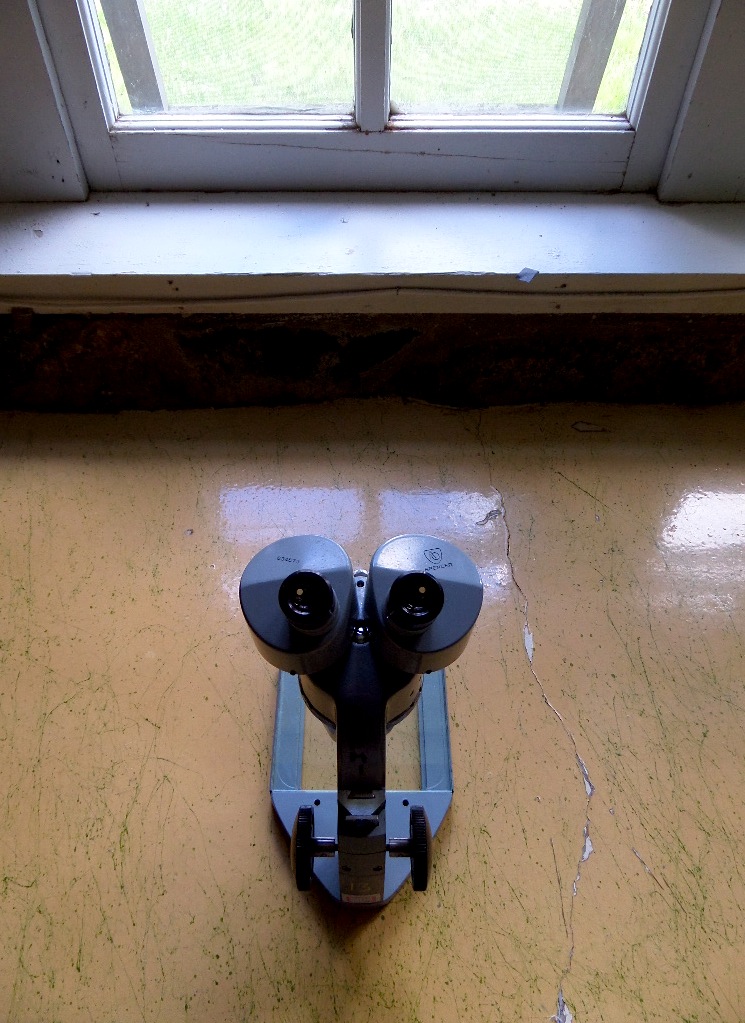