Monday
Hannah and Richelle and I go out with Neil’s class and collect samples of smaller organisms in the muck in one of the locations around the west side of the lake. I decided late last week that I wanted to make sure I saw as much as I could around the lake and soak up as many experiences. Neil’s hands on approach to everything makes him the best person to do it with. 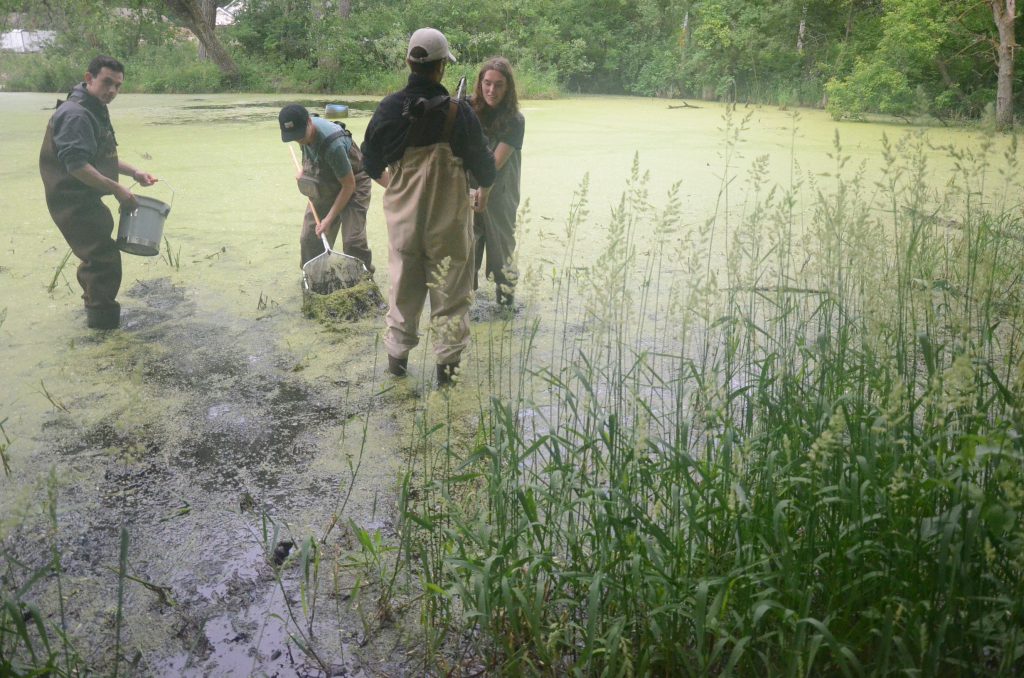 I go out again in the afternoon with Neil’s animal behavior class to try netting fish with Neil along a river. There are only four students—but the artists in residence all tag along. Neil very kindly lets the artists participate in the event and we kick up the water scaring fish into the nets. We take the fish back to the Lab and then go also net out front of Lakeside as well and catch a larger northern pike. Walking in the waders feels like being in some sort of pressurized suit.

Tuesday
We watch fish during the morning. Neil sets up a series of animal behavior experiments in which a glass tank is divided. In the most memorable experiment (at least to me,) the tank is divided into thirds and in the far right third a round jar with many minnows is placed into the water. The fish can swim around the jar but not the tank. A single fish is released into the tank itself and is free to swim around. And can either hang out near the other fishes or elsewhere. We record the location of the fish every 15 seconds for 15 minutes.

Obviously the fish hung near its buddies for over 90% of the time. This is because the fish wanted to be near a school of other fish so that if predators came it would be safer (or at least less likely to be the one fish eaten. Ironically though the one fish was the only “free” fish there. The others were living in a cage in a cage. This made me think about people. Are we, too, more genetically predisposed to “go with the herd” ? Are we more likely to grasp onto other schools of thought—even if they are wrong—simply because of safety in numbers? I started to get angry at the fish but had to catch myself. It wasn’t the fish but the processes of evolution that made the fish what it was. On average the fish as a species survived because of this behavior. I just wonder how many of us do the same and don’t even realize it.

In the afternoon we go bird watching. We visit a couple of wetlands and observe birds. I learned about Red wing black birds and their non-monogamous relationships. We learn about cuckolds. We find a frog, see a turtle and catch a snake. It was a good day. 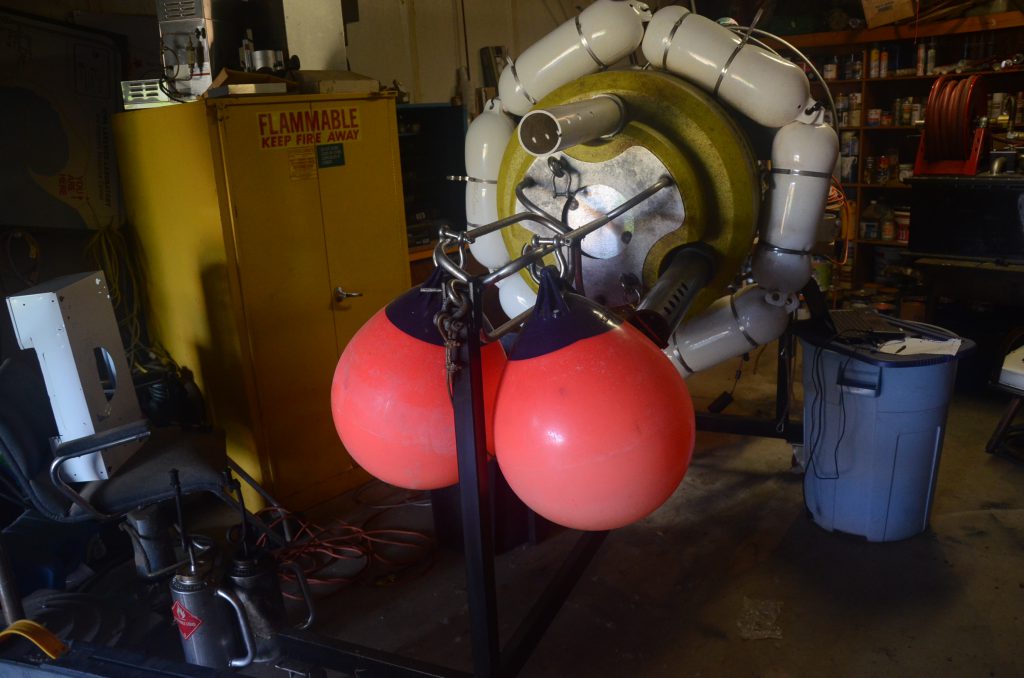 Wednesday
In the morning we go out and band purple martins—about half the campus comes in our little bus as it will be a sight to see. We arrive at this very nice gentleman’s house and set up the mist nets. Our objective is to band purple martins so that in the future, students can study their habits and locations. We set up the large kind of freaky nets and after lowering the nets near the colonies, the birds start to flap around. We only band a couple of birds on this trip but it was cool to see the morning light illuminate the gourd-like architectures of the colony. 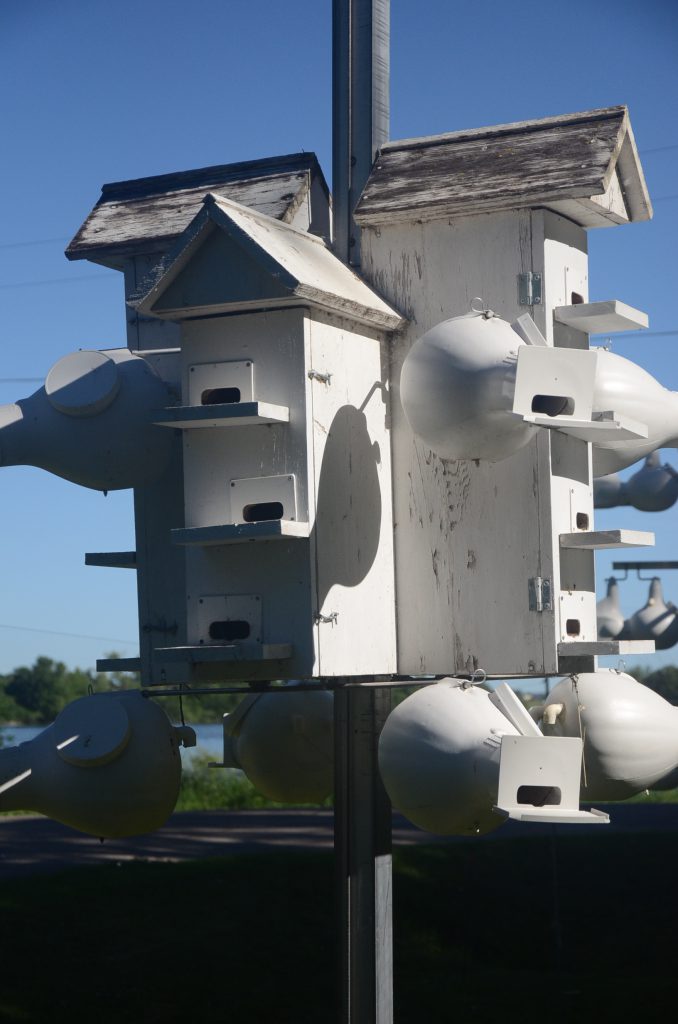 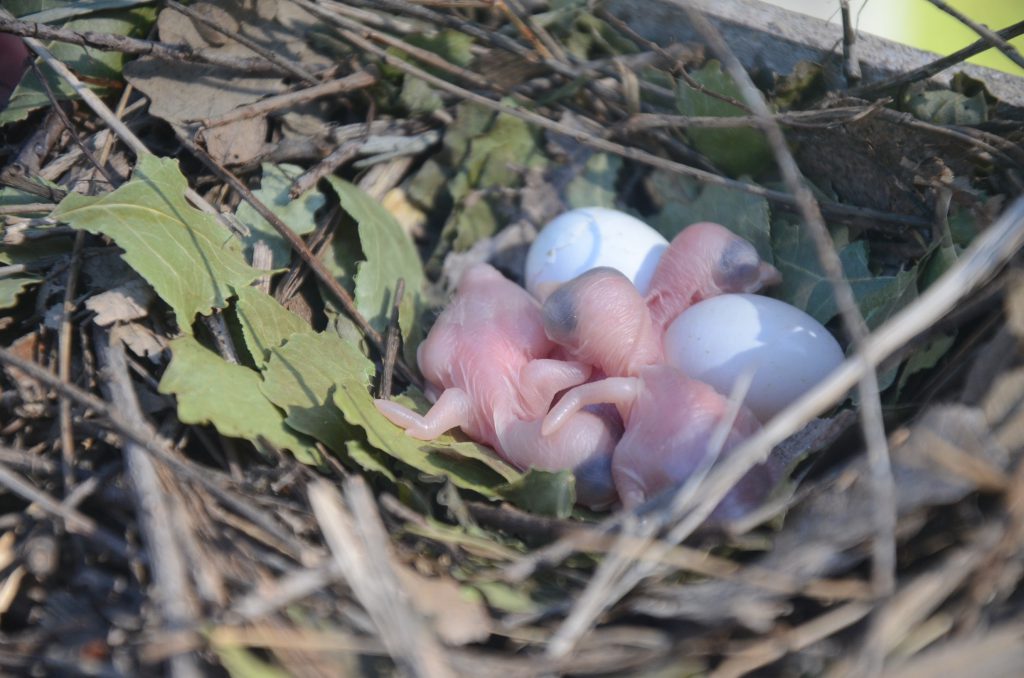 A turtle is rescued, we almost catch a hawk in the nets (almost—and the hawk almost caught a purple martin while doing it.) Turkeys wander around and we tally up the numbers of eggs in each of the nests and everyone gasps over the cute but kind of ugly little birds. On our way back to Lakeside we make a couple stops and see an osprey nest near a baseball field.

In the afternoon I work on drawing.

Thursday
I work on drawings. It has been a couple days straight of being out with Neil’s group and I’m suffering drawing withdrawal. (pun intended) Today, I decide it is better to work on drawings. It is a productive day and I draw and photograph the bone collections and other things around campus. 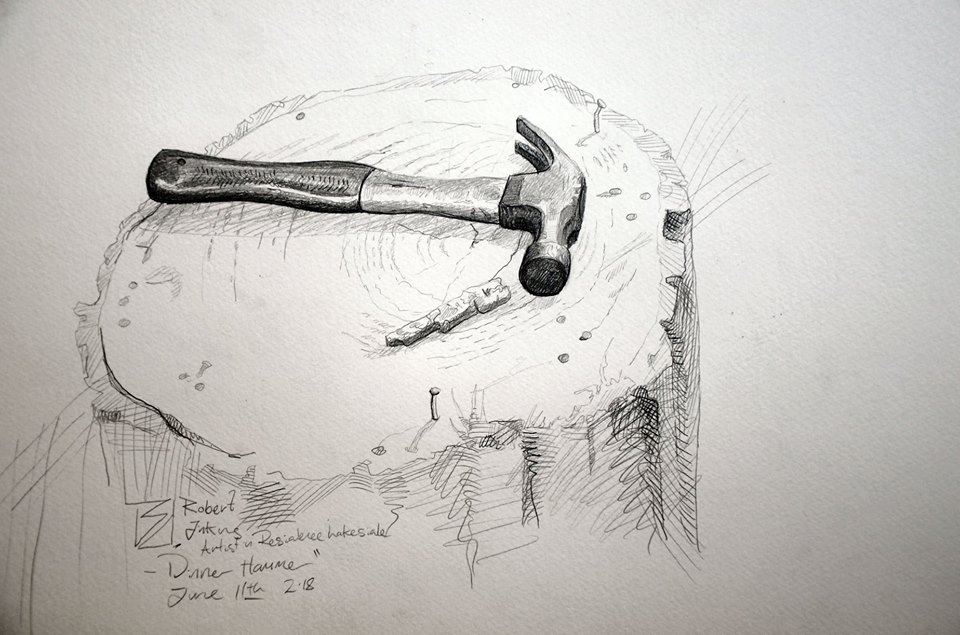 Friday
In the morning we go looking for grackles, and find pelicans, ducks, turtles, small and other sundry birds. On the way back, we stop by this seed farmer’s place. The proprietor thought of himself as a good amateur artist and he was. I enjoyed discussing art, technique, media and subject matter with him.

In the afternoon, I go out with Neil’s again to go fishing. We go to about three or four places looking for rainbow shiners. Because of changes in conservation practices, run off, invasive species, there has been a dwindling of species diversity in America’s waterways. We go to three or four sites and catch a small northern pike, some golden shiners, small catfish and a couple of ornery crawdads along with a good amount of minnows. At one location, we start into the water and while kicking up the It was a great time and an example of one of the things that makes lakeside such a great experience. Ten years from now I won’t remember what a northern pike is but I will be able to walk up to my chest in waders because of the experience. After we got done, Neil bought the class Dairy Queen smoothies on the way back to lakeside.

In the evening the artists and the writer in Residence, Anna, go out to get a beer at the West O’s. We all order a beer and retreat from the interior where a surprise birthday party was underway (at least it surprised us as it wasn’t our birthday and we knew no one). So we went outside to the veranda—a railed, graveled exterior seating area.
I ordered last—a chocolatey pint (don’t judge me) and by the time I get outside Hannah is missing so I ask where she went. Anna, the writer-in-residence replied through her freshly lit cigarette that Hannah went chasing a kitten. I ask which way she went and after asking the hot dog man where she went found her trying to coax a longhair kitten out from under an Air conditioning unit. 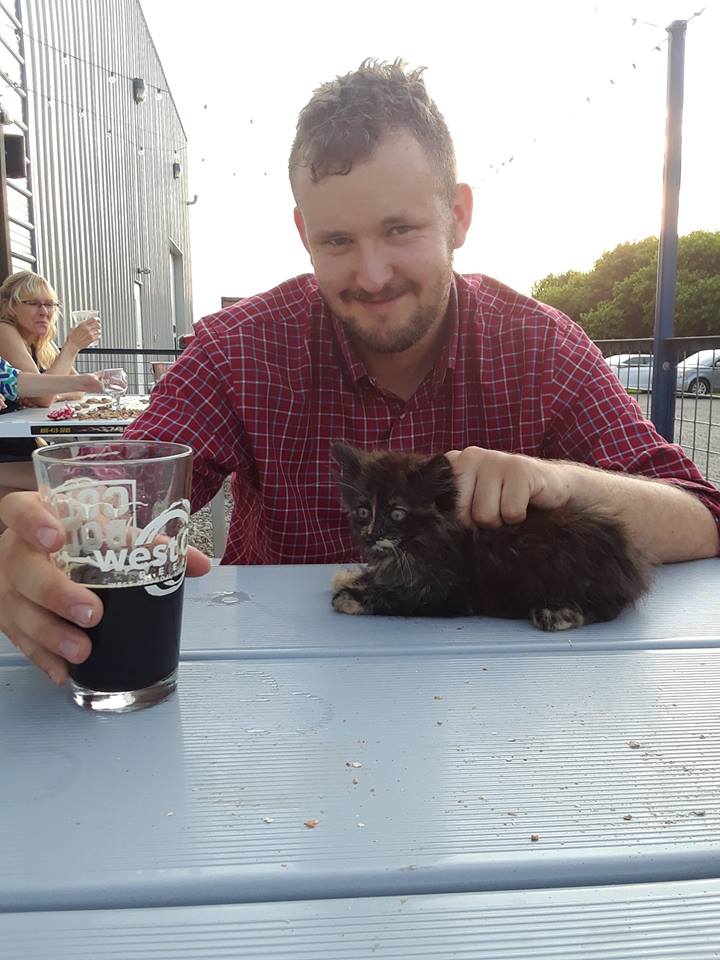 After some time of my prodding the cat with a stick, Hannah grabs the feline and we retreat to enjoy our now rapidly approaching room temperature beer. We all have a wonderful evening, full of conversation, and meeting new people. Pro tip—Men: if you want to meet women at a brewery apparently a kitten works as about half the place came and took a selfie with the thing. The hot dog man donated a hotdog to our cause which “Westo” ate up with relish. But as darkness came we had to decide what to do with the thing. We couldn’t take it to the humane society – it was nearly 9. It was decided that we would take it back to lakeside for the night and figure out what to do with it later.
So I hold the cat in my lap on the way back to Lakeside. Secrecy was important for this mission as none of us had been told explicitly the policy on creatures. I get a box from the back of the pantry and we create a nest for the cat. 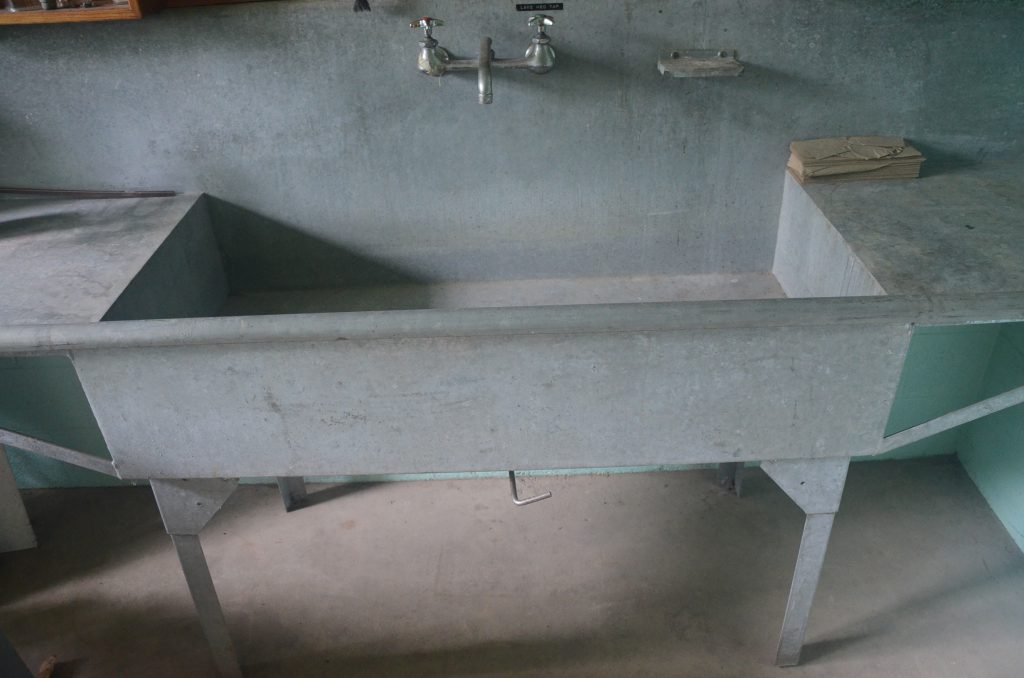 After checking in with the group at the firepit– and socializing for a time– I go to bed.

Saturday
I spend the day cleaning photographing and swimming a little.
It was a busy day on the water, and there must have been about a hundred boats in little Millers’ Bay. Tucker, Anna, and I go swimming out and around the boats in the bay but not for too long as it appears to be a dangerous activity.
We all sit I check on the fish In the evening – Rochelle, Hannah, and an undergraduate go to Hairball- a 1980’s cover band which is playing at Arnolds park. It was a performance with everyone screaming along to songs I didn’t recognize or particularly like. We didn’t spend much time there though observing the performance as we continued to tour Arnolds park. 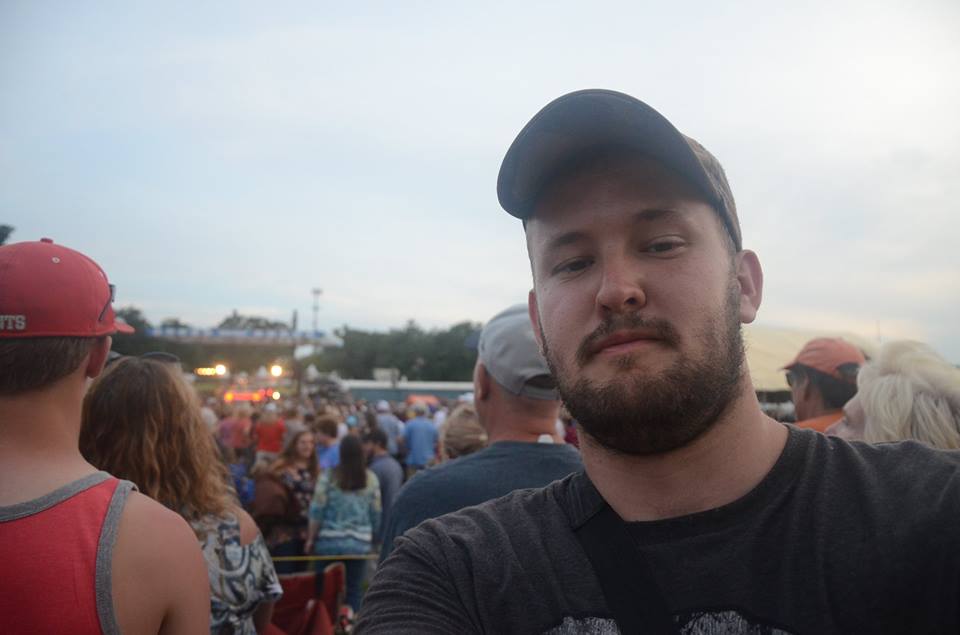 After I get back I stop by the firepit and then head to bed.

Sunday
I take it easy. I pack up. It is my last day so there is something a little melancholic about leaving lakeside. I eat breakfast and then go to church. I drive out to the Lutheran Church and sit by myself until a couple of the undergraduates come in and then I go sit with them. It was a nice service and we all head back for lunch.

After lunch, most of us (writers, artists, and students alike) go for a four-mile kayaking adventure out to a beach about two miles from lakeside. Our group gets divided, so we make it there in groups and spend time relaxing, swimming, and I fixative drawings and leave one for Matt, Neil, Bob, and Erica. I also leave one for the undergraduates on staff—one of the dinner hammer side—I don’t know what will become of it—but I thought I should leave some thanks for their hospitality. I also leave one on Alex’s desk—that one was my favorite—a drawing which has a kind of nice loose quality.

Postscript
Lakeside was is a magical place and I knew after the first day things were going to go far too quickly. I tried to soak up as many of the experiences as I could and experience nature first hand as much as I could. I executed a handful of drawings — shot hundreds of photographs—learned a lot from Neil about life, teaching, and behavior of animals.

Thanks to everyone up there who was so accommodating. I want to thank the Friends of Lakeside group—I didn’t interact terribly much with the group but it is obvious that that organization is what really makes the entire program possible. I also want to thank Matt, Neil, Bob, and Erica—the other artists in residence who were there while I was—Anna the writer in residence– and Alex Braidwood for his leadership over the artist in residence program. 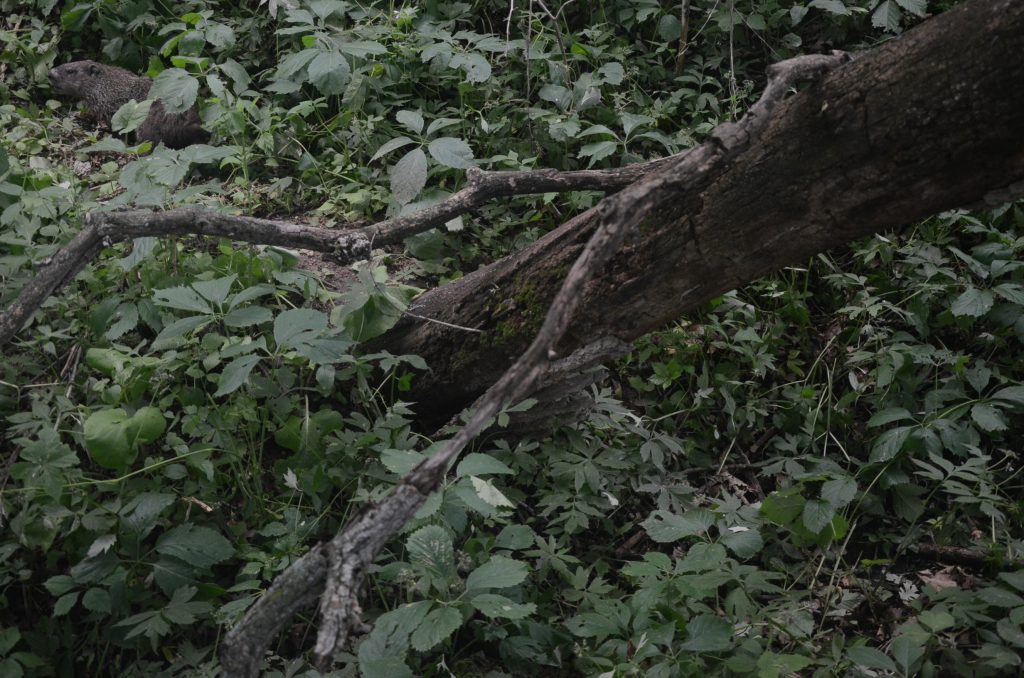