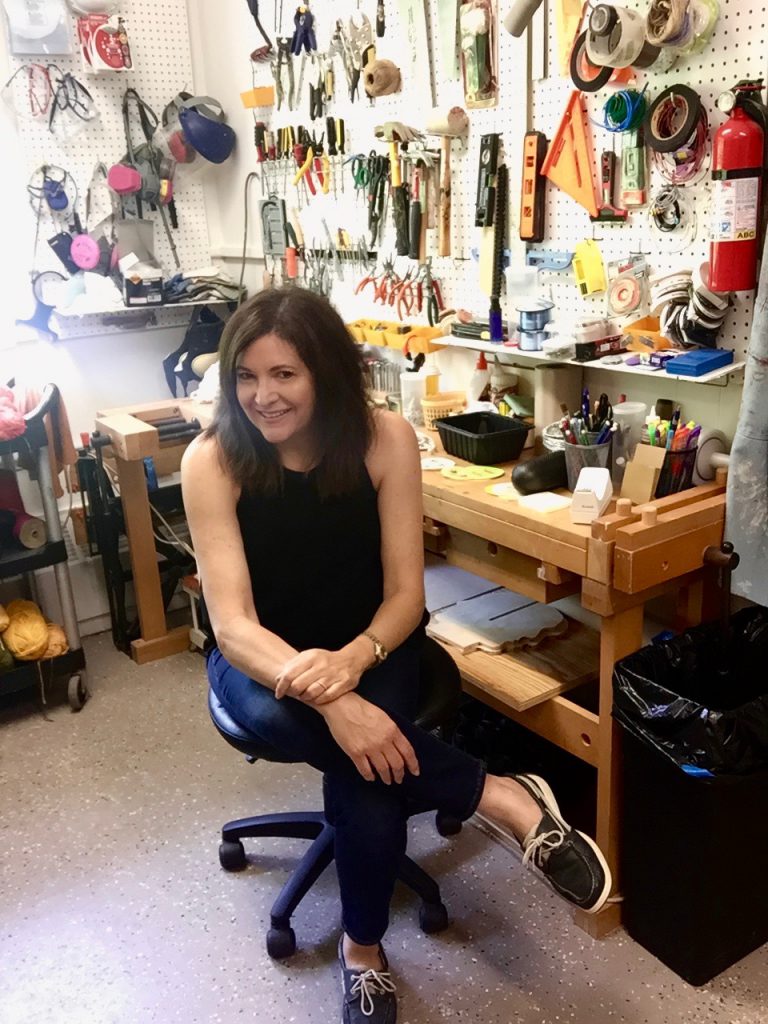 I am a sculptor and installation artist who has been making sci-art for almost 30 years. My studio is located at Riker Hill Art Park, Livingston, NJ, an old Nike missile base converted to artist studios. Situated just 20 minutes from Manhattan, it’s a long way from Milford, Iowa. I have never been to the midwest before. I have not camped in the woods since I was 8, I have not hiked since my early twenties, and have never been an outdoors type. Before I arrived at Lakeside Lab, my imagination ran wild trying to visualize what Iowa would be like. I conjured images of fields of mosquitos and ticks, coyotes running rampant through the prairie, cattle farms and corn fields, fish swimming upstream and landing on the banks of rivers and medics who are located not less than four hours away.I didn’t know what to expect and this gave me a strong sense of unease.

I arrived at Lakeside Lab Sunday afternoon and began to unpack my luggage. I brought all of my phobias on the trip with me and laid them out on the bed: my fear of small creatures, my fear of dead creatures, and specifically my fear of dead fish that float with their eyes looking square at me. I have been dragging this heavy load with me since I was seventeen and was terrified of what I would encounter at this residency.

I wasn’t always spooked by dead creatures. My childhood home was once filled with a wondrous array of fish, turtles, frogs, gerbils and miniature seahorses. My dad was always nurturing the babies that were born and had even tried to breed beta fish, which was a fascinating and brutal process to witness. We had seahorses, including a male who gave birth to around 30 babies which were so tiny, they looked like little fairies gliding through the tank. I remember running home from school to see them the day after they were born. Unbeknownst to me, a worker in the house had placed a large preserved seahorse in the tank, killing them all. When I came home from school, I looked into the tank to find the huge seahorse floating on top with all the other seahorses attached by their tales, swaying in the water. My second trauma happened when I discovered the tankful of our large Egyptian mouthbrooders floating belly up, due to a catastrophic tank fail.

So my fears were born out of stumbling unexpectedly on dead things that continued to move, despite their death, by water or air. A dead fly that breezed along a windowsill, feathers of a dead bird that still fluttered in the breeze, the hair on a dead mouse in the grass, well, you get the idea.

Seems silly on paper, as most phobias do, but the emotions they trigger feel real. And if my irrational phobias weren’t enough, I was raised to be cautious. “Careful, don’t fall”, “Hold onto the handrail when you go down the stairs”, “Don’t!” “Careful!” “Watch out!”, all lessons given with love to keep me safe. Believe me, I’m the most careful person you’ll ever know, and keep this in mind when I tell you about the canoe ride.
I was informed that I should be mindful of poison ivy, poison oak, wild parsley, and nettles. These plants added a lush layer to the anxiety I was already feeling. I bumped into Paul Weihe, who teaches Aquatic Ecology, coming from dinner and I lost it. Yup – I cried, “I don’t know what these plants even look like – and I’m afraid of them all!”. I’m not sure what Paul had planned for the next half hour, but with such kind generosity he said, “Come, let’s take a walk” and he guided me through the vegetation while explaining them to me. I was hoping to recognize poison ivy by the end of my stay, but so many leaves of three looked alike.

(Can you recognize the difference between poison ivy and blackberry leaves? If you can’t, like me, you may have what is known as plant blindness. This is a lot like color blindness, but itchier. I’m doomed.) 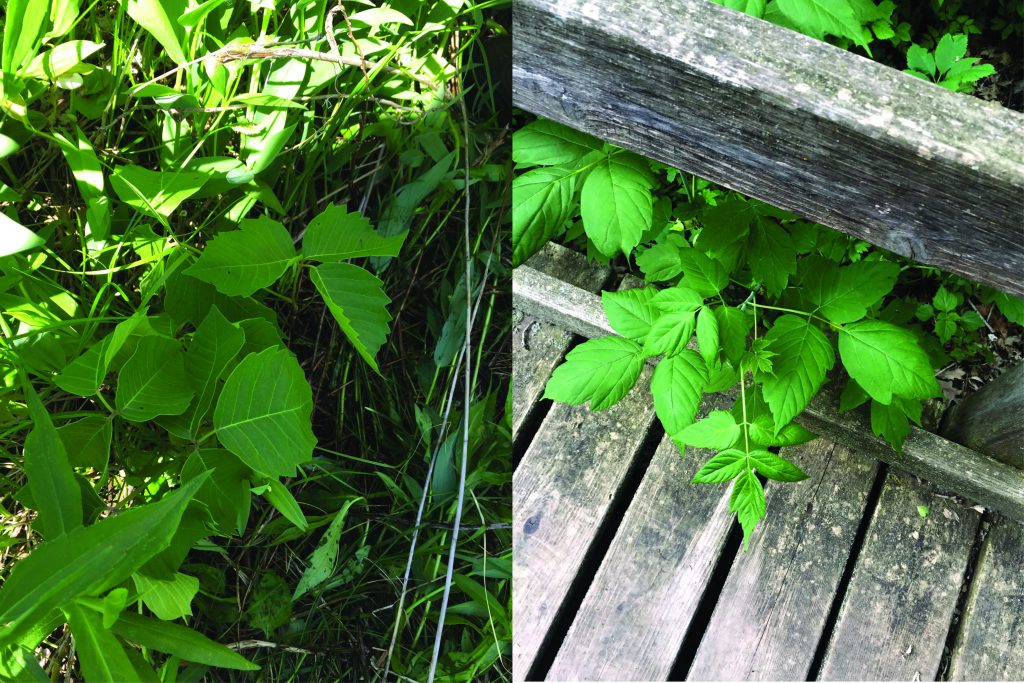 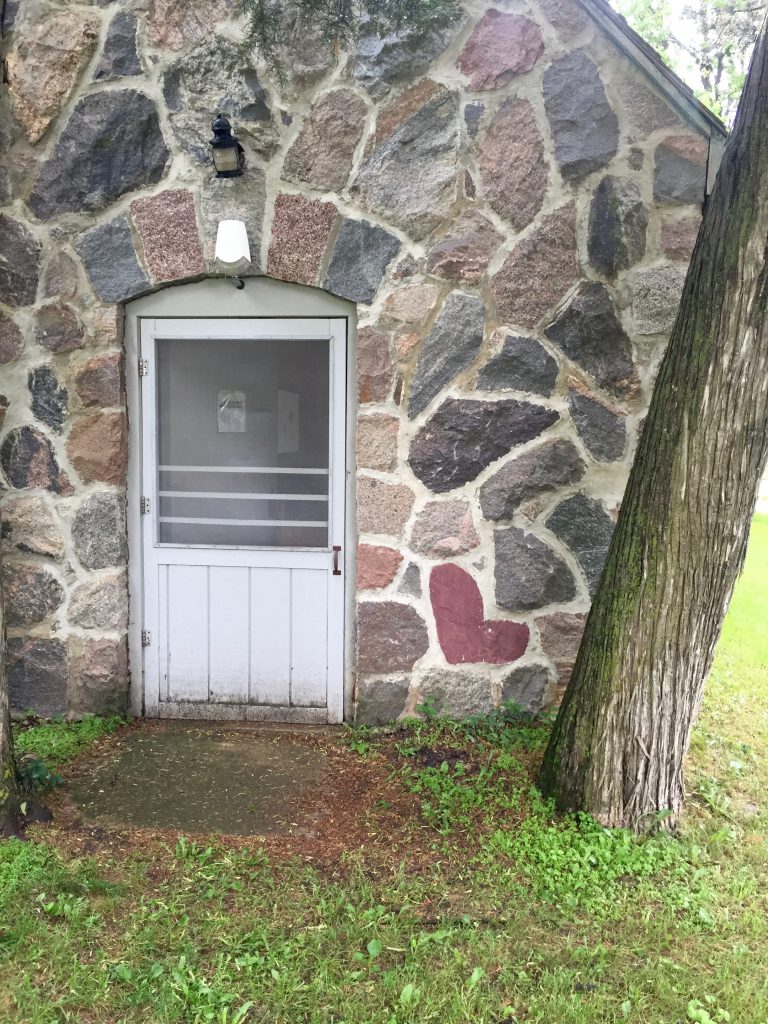 Alex Braidwood gave me a tour of the grounds and showed me to my studio located in a spectacular stone building. Ours was the building with the heart shaped rock by the door. Lovely.

Day Two — I had an idea of what I wanted to create, a large wool banner to hang from a tree, which would explore the relationship between man and landscape. The negative space of the figure would allow the viewer to visualize nature within the context of the human form. I have always treasured my relationship with trees, they breathe out, I breathe in — we’re in sync and they are the focus of this installation. I made this quick sketch on my phone, which indicates the fine drawing skills I have honed over the years. 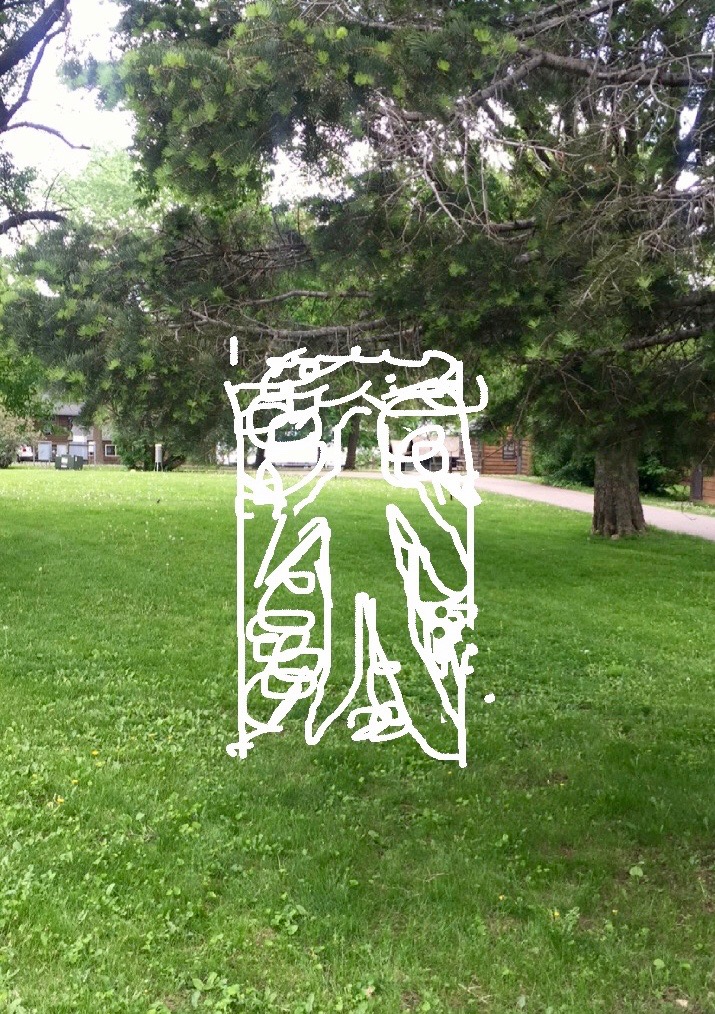 After creating my template from a 99 cent tablecloth, I began to crochet the banner with a large crochet needle. The wool was soft, the stitches large and I wasn’t sure this was going to hang properly, but I trusted my vision. Two weeks wasn’t a lot of time to complete this piece and I also wanted to fabricate a diatom themed piece as well, so I crocheted during the day in the studio and at night in my room. This wasn’t the first time I took my work to bed with me. 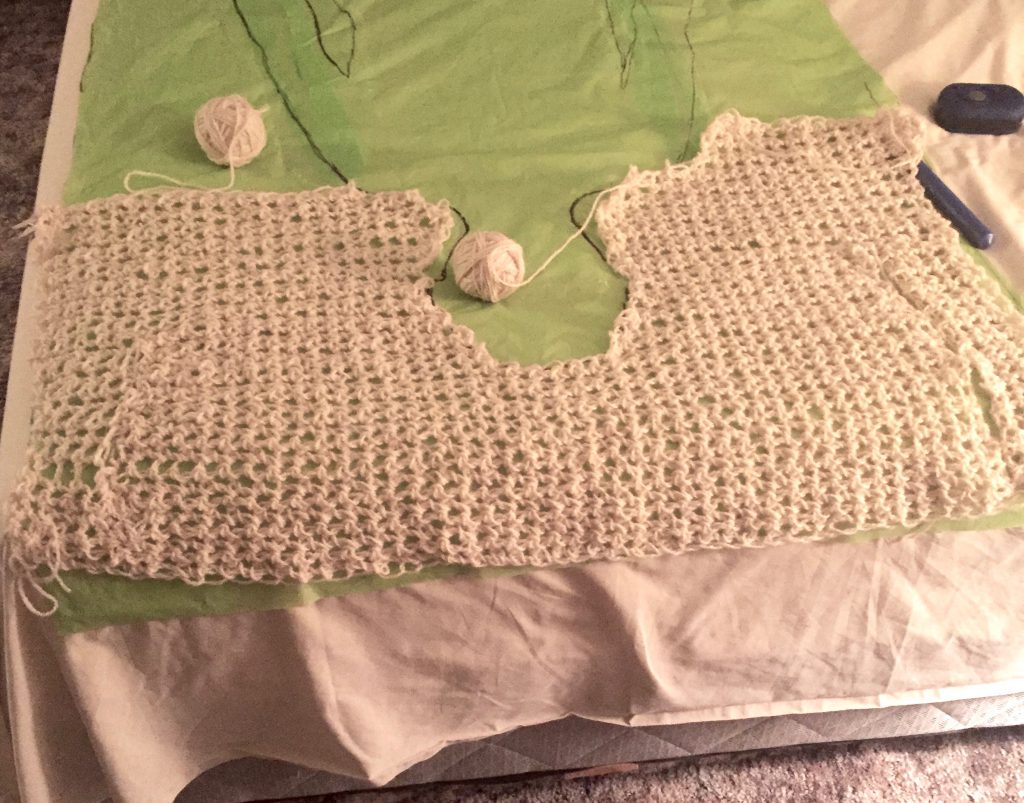 Day three — I joined Sylvia Lee’s diatom lecture downstairs in the library. Diatoms are single celled organisms and are important to us because they are the workhorses of the planet, producing around 25% of the oxygen we breathe. They are also a food source for large aquatic animals and they give us insights into our ecological conditions. Sylvia thoroughly described the anatomy of both the symmetrical and asymmetrical biraphid diatoms, which was fascinating. The vocabulary she used to describe these organisms was all new to me, and I did my best to keep up. Diatoms often have bands of silica called girdles that keep their outer frustules, or hard external layers, together. These are said to detach spontaneously, and I wonder if diatoms get so fed up being uncomfortable that they throw away their girdle bands intentionally in protest of impossible standards of beauty. 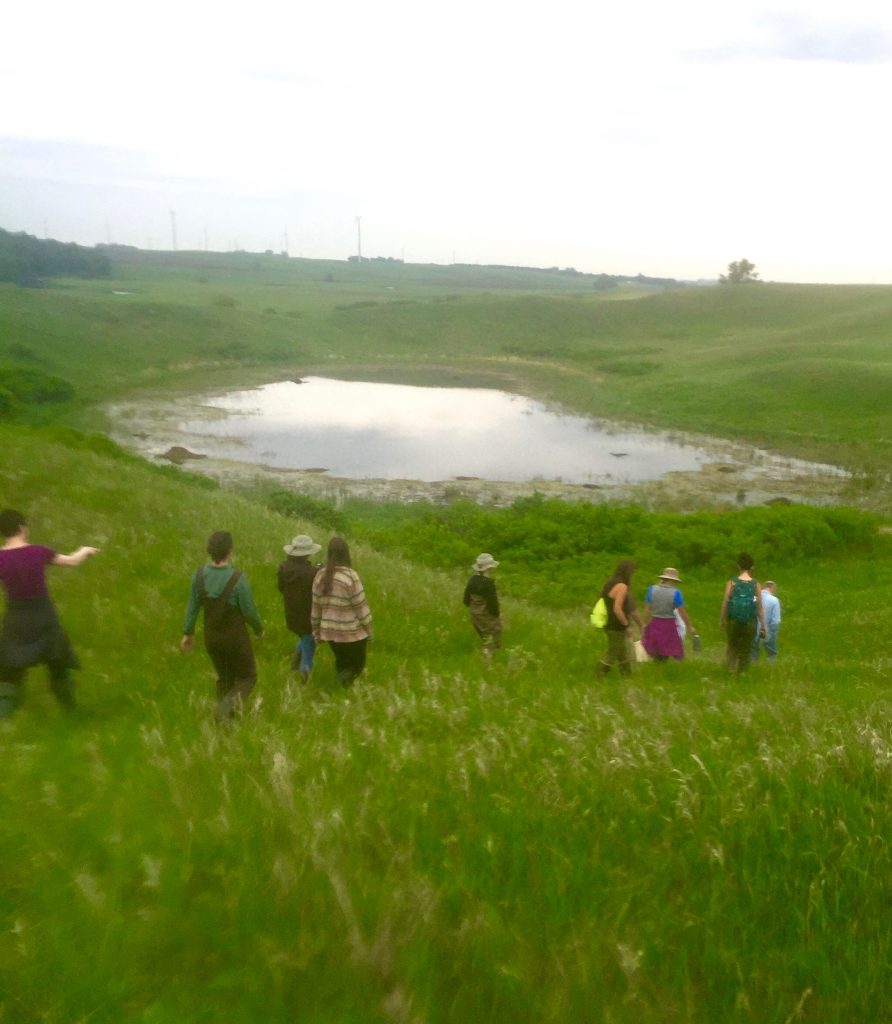 On Wednesday, I joined Sylvia Lee’s class for diatom collection at the kettle hole. I was impressed with the enthusiasm of everyone on site. Their bravery and curiosity was contagious. We came back to the lab and the students made wet slides of these aquatic organisms. Sylvia set me up with my own microscope and gave me a slide to explore. Under the microscope, the diatoms behaved like menopausal women trying to avoid a hot flash. I watched them furiously move away from the light of the microscope and take cover under the debris floating in the water. I became fascinated with the focus wheels of the microscope, as focus can certainly alter the information one sees through the lens. I decided to create a piece of art around this concept once my crochet work was completed. 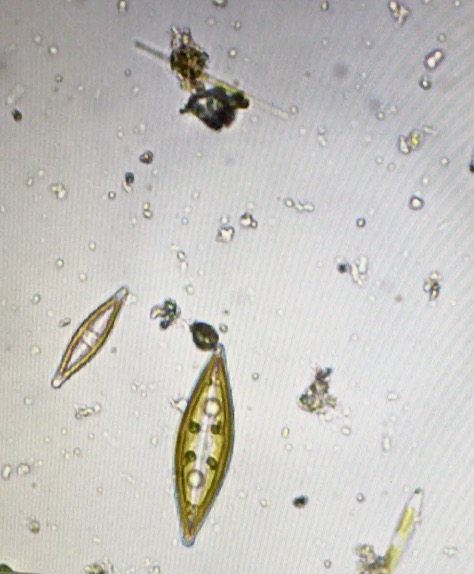 The next day I went bird banding with Neil Bernstein’s class. Large nets were set up around the perimeter of the manmade birdhouses and this mission was to capture as many purple martins as possible to record data and band them. Almost immediately, birds flew into the nets and the students clamored to carry them safely to the banding station. Neil asked if I wanted to hold one and I reluctantly agreed. I felt the heartbeat in my hand and recognized its fragility. This was a turning point for me and felt a connection with this little bird that took me by surprise. My fear dissipated and was replaced with empathy. Tears of joy. 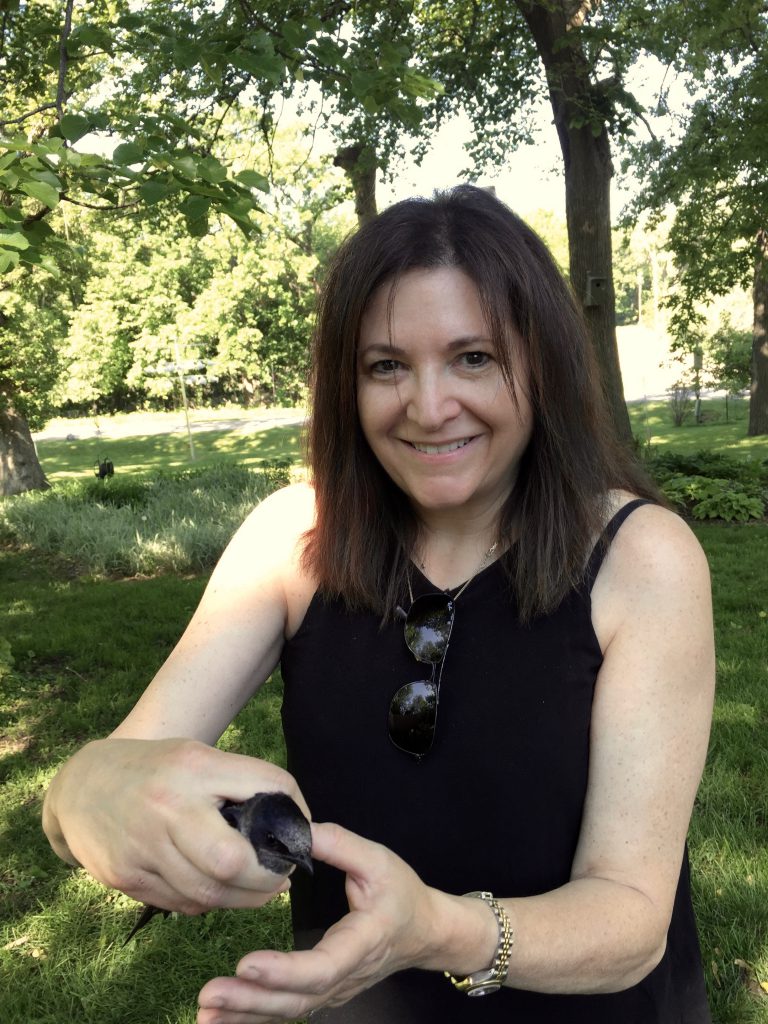 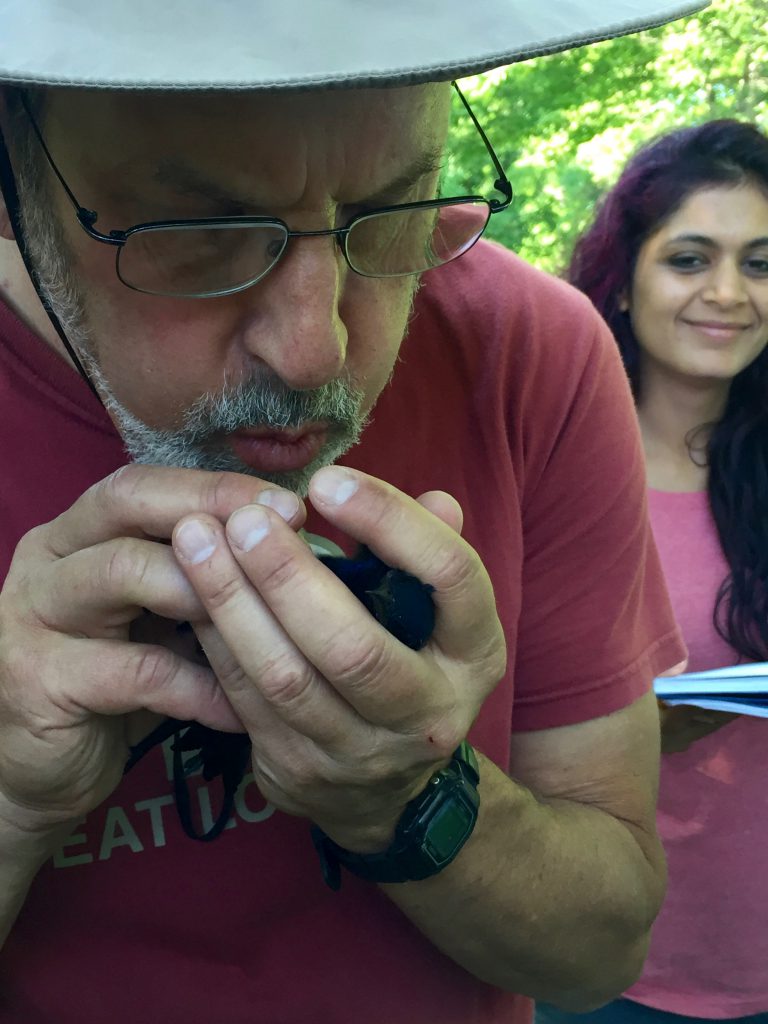 Shortly after my aha moment, Neil showed us how to expose the little fat ball that’s found over the bird’s sternum by blowing on its chest. Afterwards, the bird was weighed and given a promotional introductory rate for Weight Watchers and a free gym membership trial.

After lunch, I joined Neil and Paul’s classes to go seining for fish. Seining is a super long horizontal net that is used to catch a large group of fish at once. Gone are the days of sitting with a fishing pole and frittering the day away. It is possible to catch hundreds of fish within minutes with a seine, and we did (well, they did, I just watched). The fish were caught, then transferred from the nets to buckets of lake water. The purpose of this field study was to document the species and quantities of fish that were caught in three different streams of water. Some fish measured a foot or more, others were tiny. As I peered into a bucket of the smaller fish, There were around a dozen little mackerels floating belly-up in the water. I chose to continue to look. Remarkably, I didn’t feel any emotion other than sadness. Breakthrough! Walking back to the van, I passed a mangled dead bird at my feet, its feathers blowing in the breeze. Poor little thing, I thought, but I wasn’t spooked.

That evening, the sky was filled with stars.

The next day I held an impromptu workshop with the diatom class to create a permanent exhibit for the diatom lab. Their models blew me away and this goes to show you how important understanding anatomy is. These students were able to sculpt professional models of the diatoms because they understood the anatomy of their diatoms – and their results were amazing! We later glazed each of the models with a brown acrylic wash and I combined the models with frenzel lenses used to show magnification. I’ll be recreating the lenses in wooden frames once I get home and future classes can expand this installation with additional diatom models. (A huge thanks to Matt for helping me install) 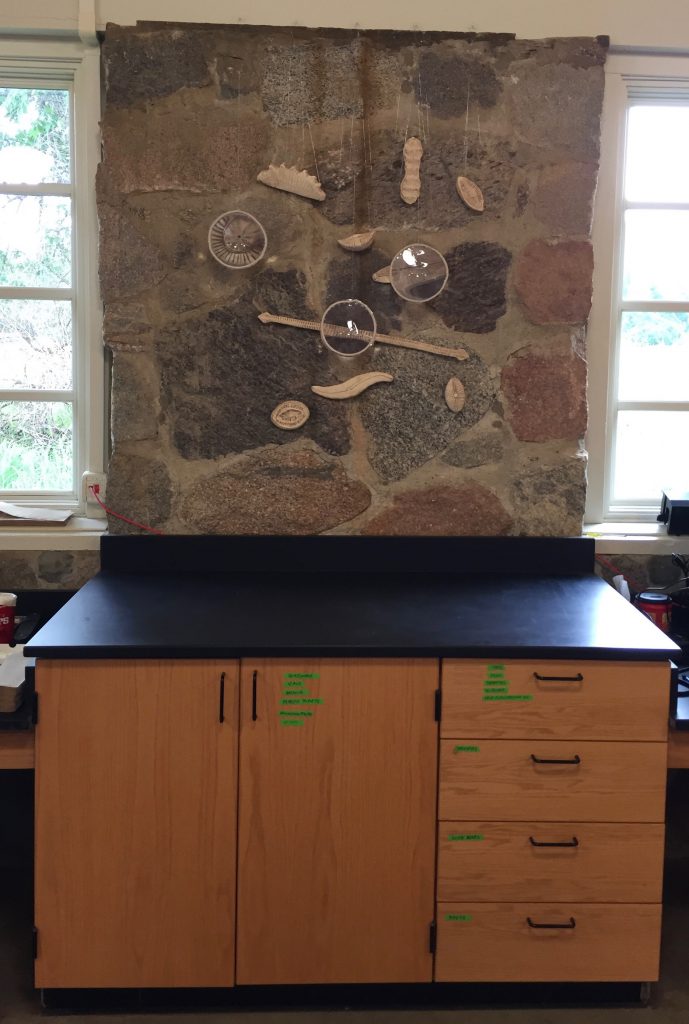 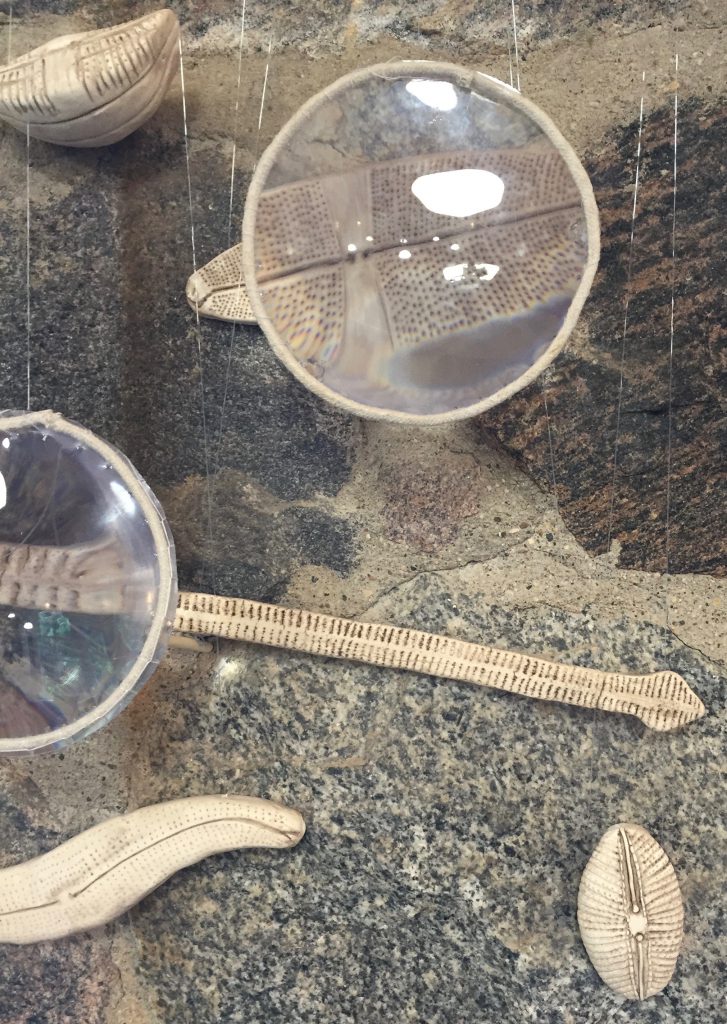 At night, time to relax by the bonfire. 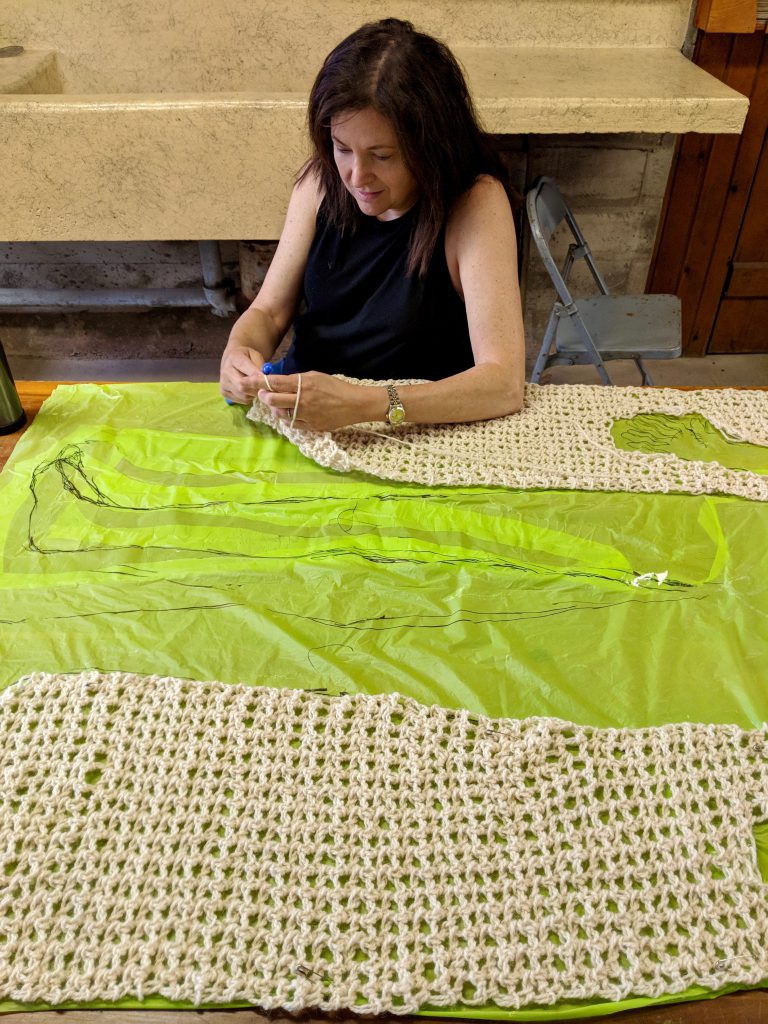 The last day of the week, I worked, worked, worked. Crocheting takes time and there isn’t much of it here with all the things to do. I have left many exciting adventures out. 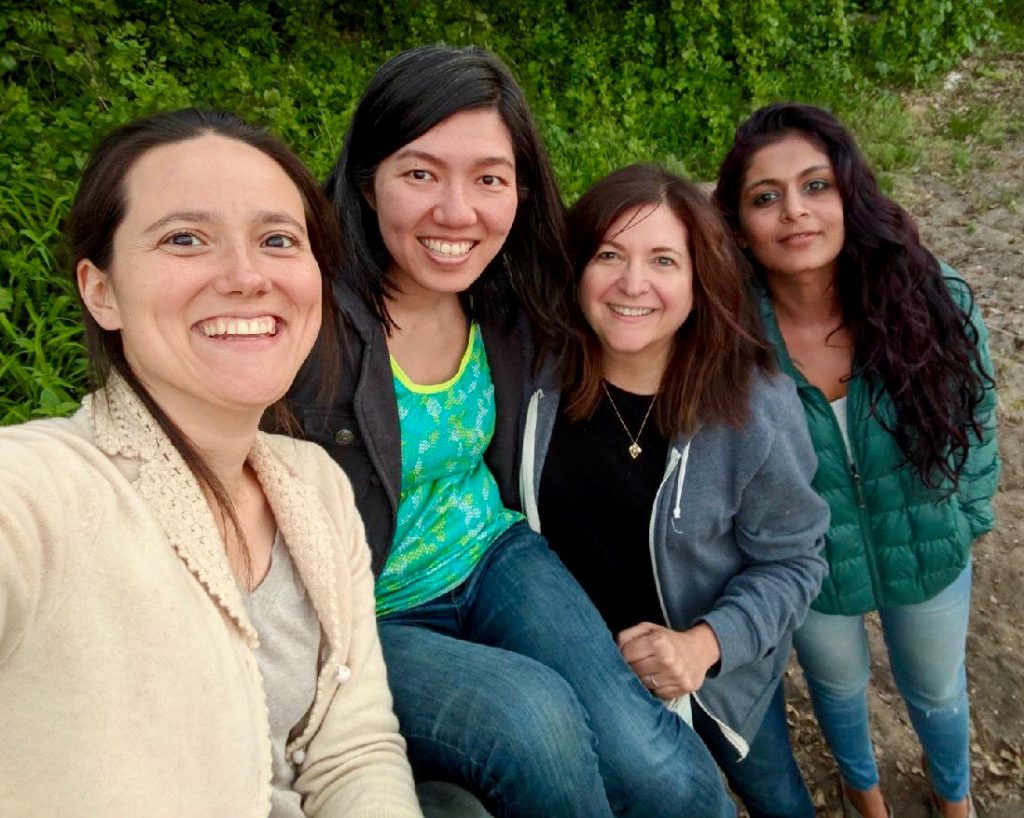 This evening, I walked to the beach with artist-in-residence Jeni, and the two writers-in-residence, Kartika, and Anna. Such beautiful, wise young women. By the waterline, a dead fish washed ashore and I had no emotional reaction at all. More validation.

Afterwards, back to my room to crochet in bed once again.
Reflection on this past week: Most of my friends over the years have had no idea of the fears I’ve carried these past forty years and they would find my phobias quite ironic since I’m regarded as an artist who is bold, fearless, a guerrilla girl of sorts. I trained as a fine artist for months in cadaver labs, have worked on scaffolding, and have always seen my path without
barriers. But hidden behind my confidence as an artist, a very vulnerable, scared remnant of my childhood remained, invisible to most. I’ve confided my fears this week at Lakeside Labs with more people than I have in my lifetime. Having been terrified of something so irrational for so long, I’m hoping that my inner strength as an artist will continue to step up and help me to conquer any anxiety that may hold me back in the next week. Much gratitude to Neil, Paul, and all the others who have helped me to come so far.