Artist Lab Report:
It is Important to be Fascinated by the Little Things
by Hannah Fisher

6/18
On Monday morning, with the animal behavior class, we released some sunfish, pike, bass and minnows that we had gathered for predator/prey experiments. It was a rainy morning, so we went to a coffee shop to talk about parenting behavior. During the discussion, Neil got a phone call from Dwight who restores natural prairies by gathering and selling the seeds from native prairie plants. Dwight was providing guidance on prairie restoration at a local site, and was looking for butterfly attraction information from Neil, so we drove out to meet him. Dwight told us all about corn and soybean farmers who often overlooked the importance and value in these native plants, and how little native prairie there was left in Iowa.

When we got back to the campus, we hiked down by the water to see if we could track dragonflies to understand their behavior. It was a cooler morning so Neil was not sure if we would see many dragonflies out, as they typically hatch from their pupal stages and fly in sunny, warm weather.

We were able to find a dragonfly on the underside of a leaf who had just shed his pupal skin, as that skin was still attached to the leaf next to it. Neil was able to pick up the dragonfly and we observed as it made no quick movements to get away and instead, shivered on Neil’s hand. Neil explained that the dragonfly was much like us in that he shivers to create warmth. As we were discussing this behavior, the sun broke free from the clouds for a moment, and after a minute or so of the dragonfly absorbing this warmth, we watched it take off from Neil’s hand and fly into the forest. I remembered thinking “we just saw that dragonfly’s first flight” and yelled “happy birthday!” as he flew away. It was such a special moment getting to see that little creature fly for the very first time. 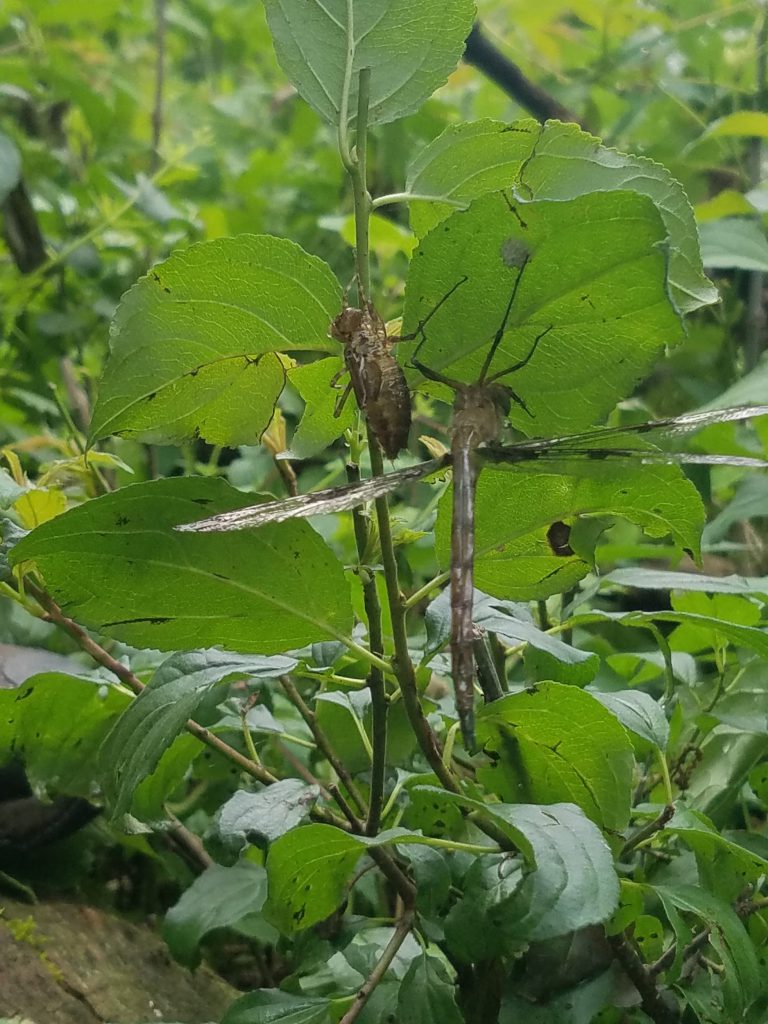 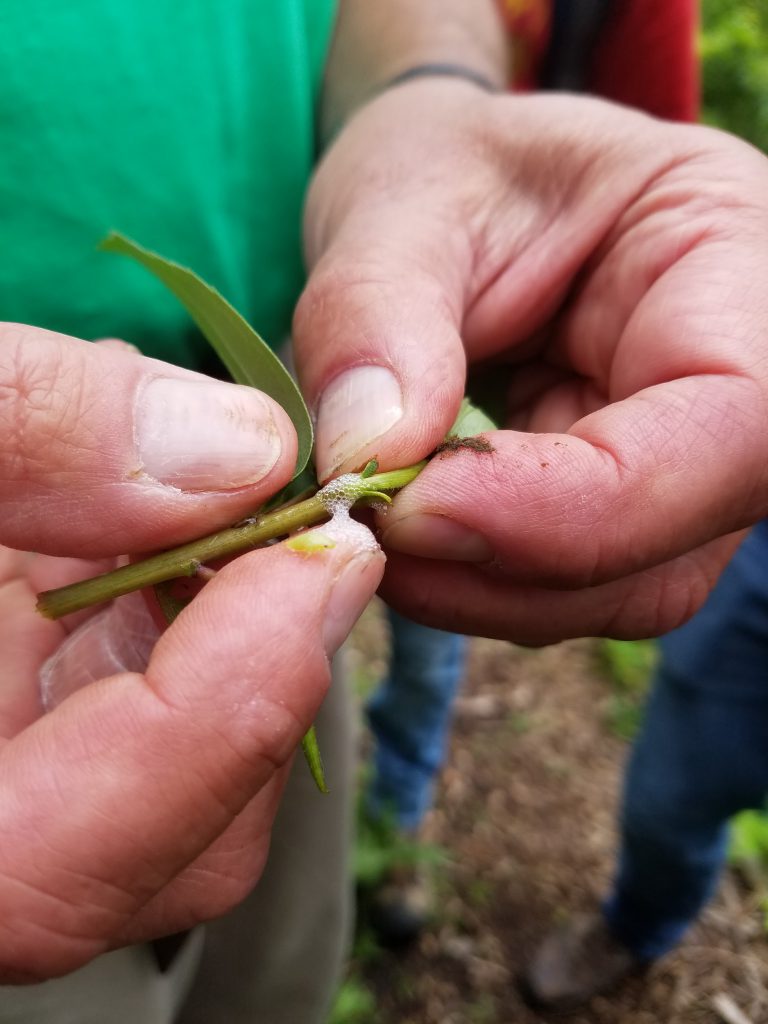 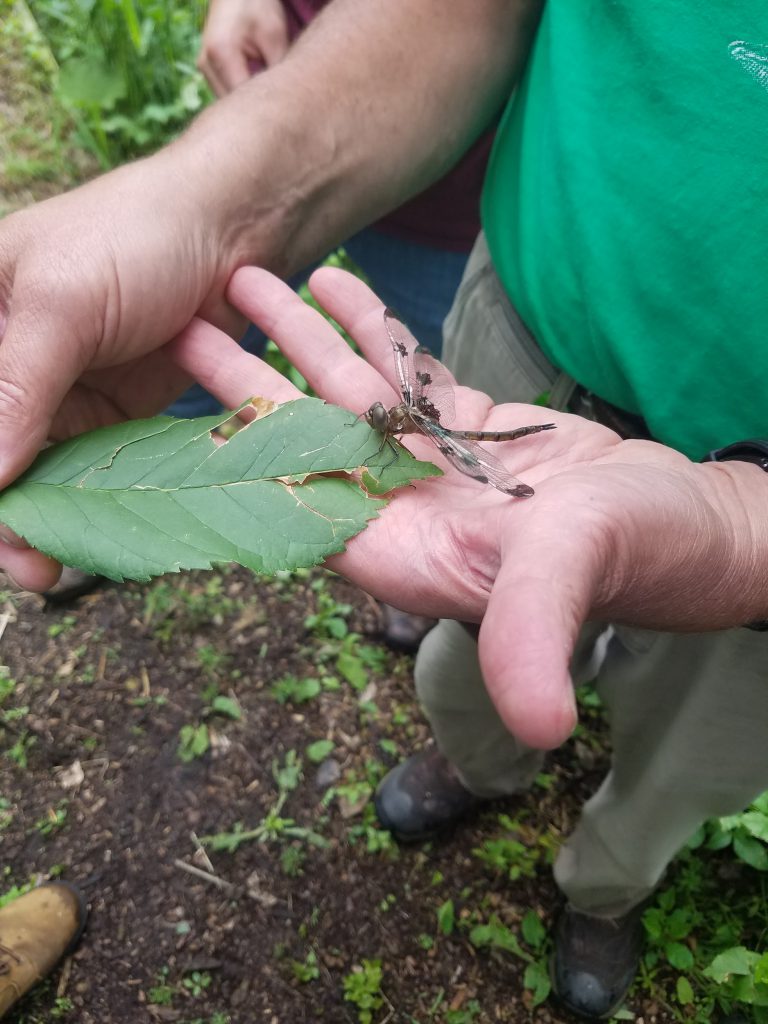 After observing a few more insects in the area, we hiked back up to the studio where Richelle taught us to use a 3D pen to create plastic insects, and we ventured into the King Lab to work on making a specimen collection of our own, as a class.

In the morning, I joined Neil’s class again, and we were able to go out on the lake with a group of graduate students who were collecting data on fish (bottomfeeder) population in correlation to water cleanliness.

When we got back to the campus, I started making plans around an outdoor installation that I hoped to begin that day, using the pre-cut wooden pieces that I had brought. I had started to fall in love with some of the walking trails through the forested areas with dense underbrush, and I had been playing around with the duality of the word “understory” – I thought that one of these areas might be a good location for an outdoor sculpture, and draw interest to the landscape.

The rest of that afternoon was rainy, though, so while I waited it out I started working in the lab on a painting inspired by Wendell’s description of the rose-breasted grosbeaks. It had stuck with me how each bird has its own patterning of the rose breast, and I wanted to celebrate the individual while highlighting each unique story. 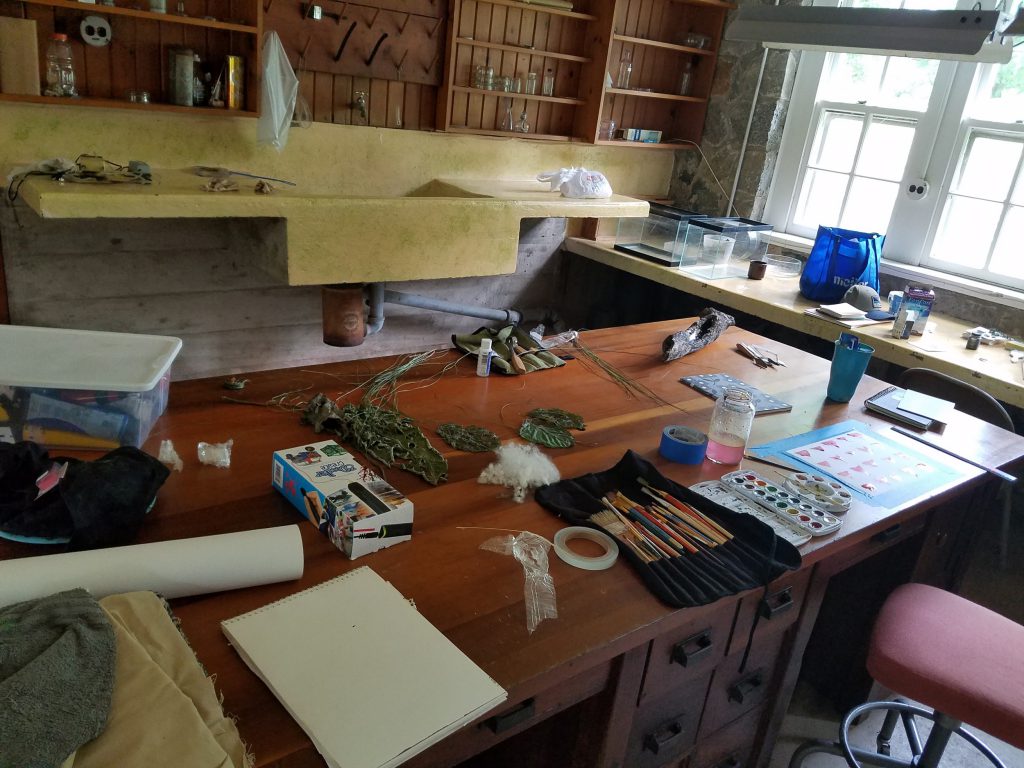 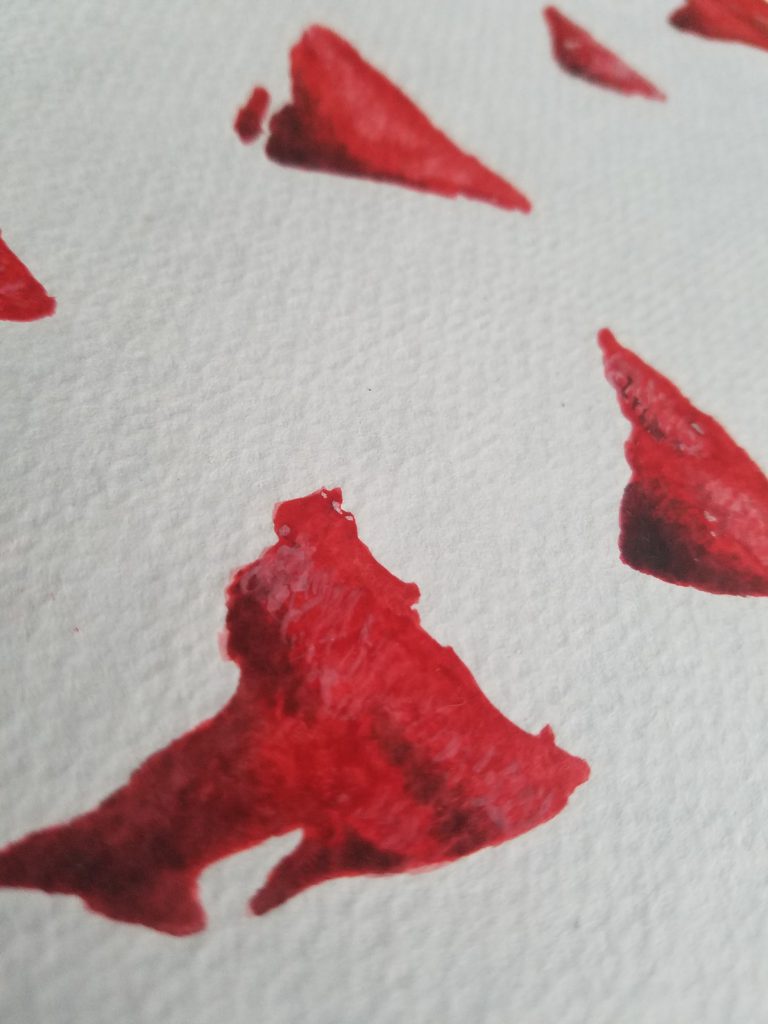 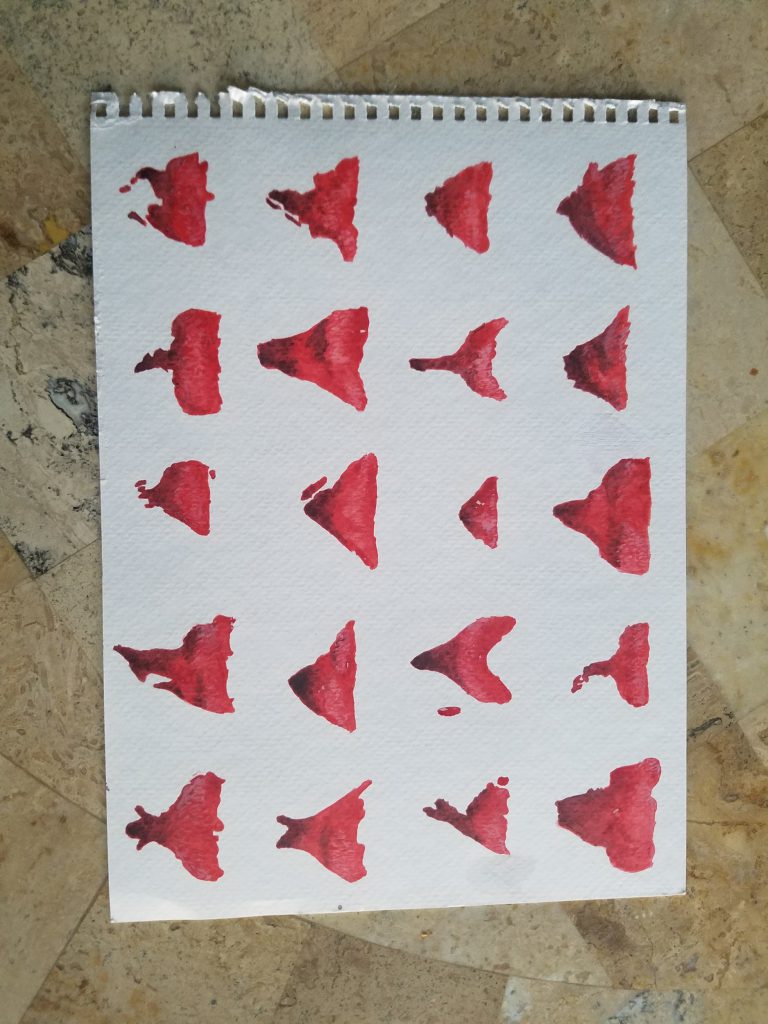 6/20
Today was a rainy one, so I spent some time working in the studio on my linocuts, and exploring the ability of making my own pseudoscience identification tags, inspired by the tags on the birds in the King lab collection and the metal tree ID tags within the Bodine lab.
Since I didn’t have the resources with me to create metal tags of my own, I decided to first experiment with paper. I had enjoyed the personalization of the handwritten tags on the bird specimen, but worrying that my own handwriting would appear too modern and haphazard, I remembered that I had seen a few typewriters in the library that I thought I might use. I took some paper over there and started creating my own ID tags.
I began to write the tags by imagining that I was interacting with trees on the campus, or ones that I’d known in my life, and thinking about how I might describe these trees based on how I felt about them, or what they made me think of, or why they were special, rather than by their classification. 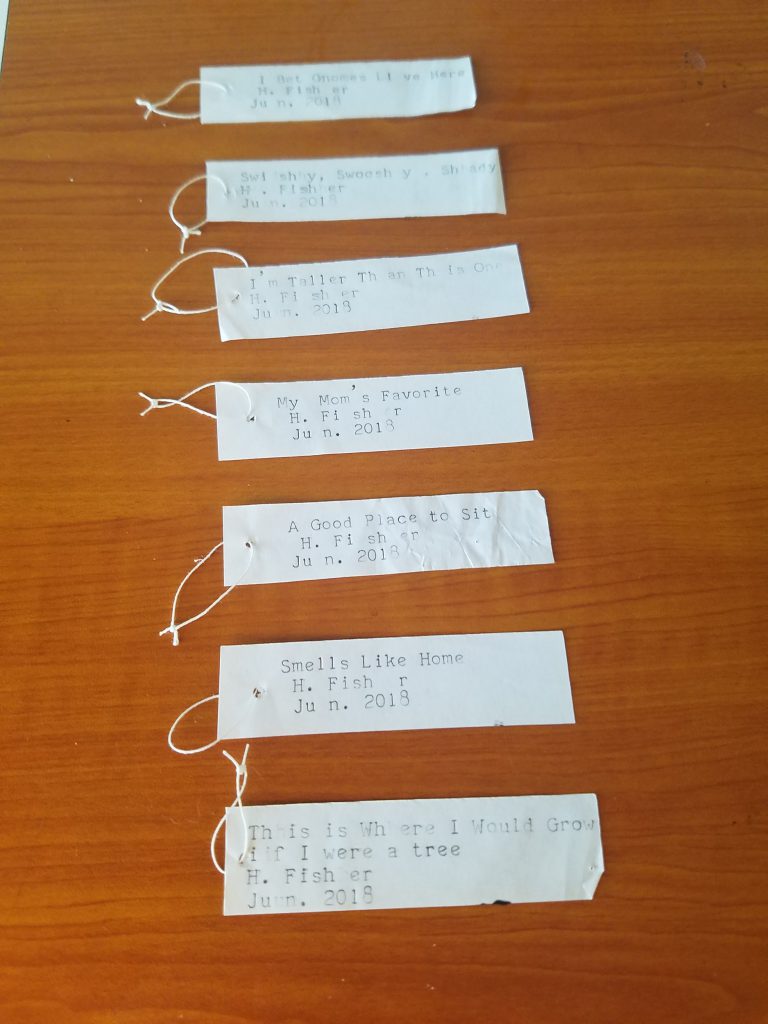 On this day, Richelle and I were having our open studio in the evening (Robert had left the day before). We had planned on each giving an artist talk during the open studio, so I had things to prepare, but I couldn’t help myself from joining in with Neil’s class again this morning (and I’m so glad that I went). I wanted to learn everything that I could with my time here, and soak it all in.
We went to another wetland preserve in search of pelicans, and were successful while also finding large, wooden muskrat homes, cormorants, gulls, and pelicans all at the same site.

We went to another location ok the preserve and found many types of birds and ducks (redhead ducks, American coots, black terns, turkey vultures, ruddy ducks, and a western grebe), and then went fishing for minnows (and got to hear the individualities of each minnow type).

On the way home from the trip, Richelle asked Neil why he chose to study nature, and what it means to him. Paraphrasing on his answer, he noted that there are some things that are just not filled by society, and it is important to be fascinated by the little things – that people don’t understand how important the little stuff is.

All while he was explaining his answer, the entire van full of us was captivated. It made me start to think about how I would answer that question.

When we got back to the lab, I put together some slides for my artist’s talk later, to show some of my past works and inspirations, and some photos of my experiences in the lab thus far. Many wonderful people showed up for our open studio, and it was amazing getting to interact with these scientifically-minded people on the subject of art. It was so great to hear everyone’s insights about the intersection of science and art, and talk with people about how art can be used to share the importance of nature, and these things that we care so much about, with a broader audience.

One of the big discussion points in my talk and with the community of scientists, was that once we can understand and appreciate nature, we can have an emotional connection with it. It’s a different way of feeling the important scientific concepts, and through this lens, we can see science as a way of making friends with the world. 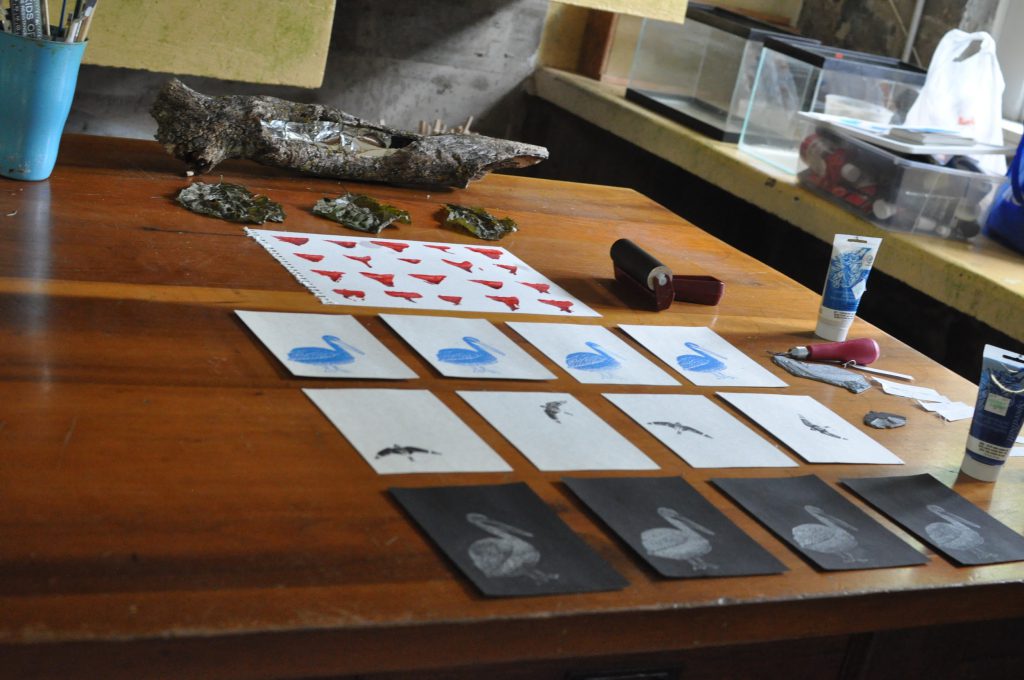 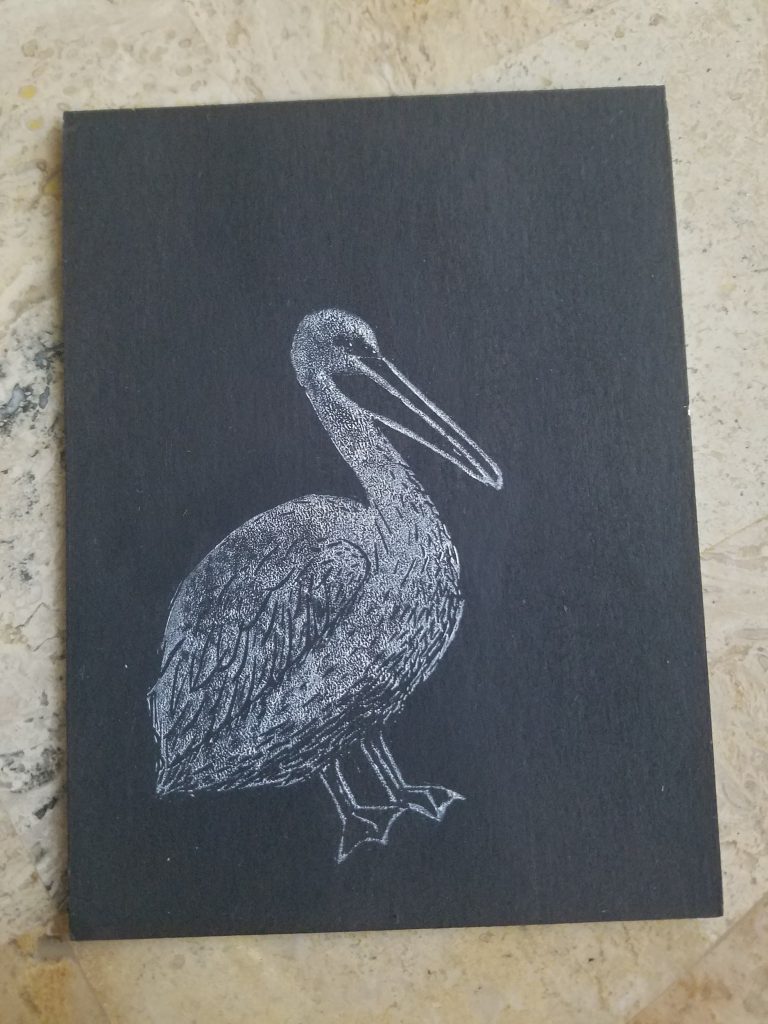 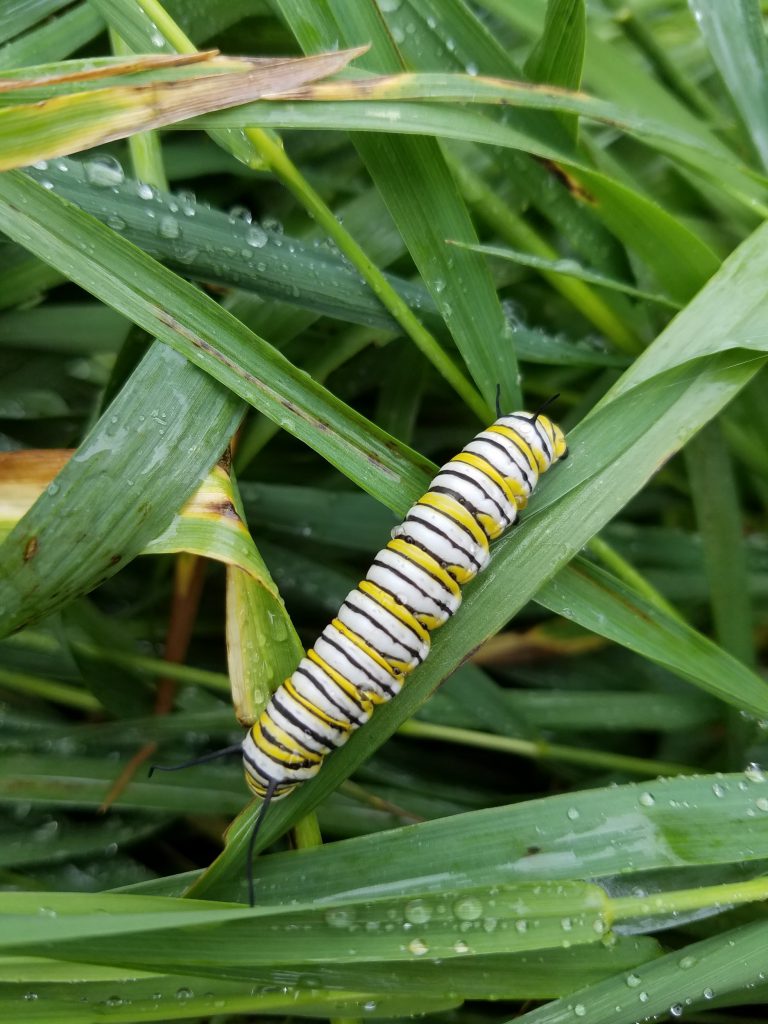 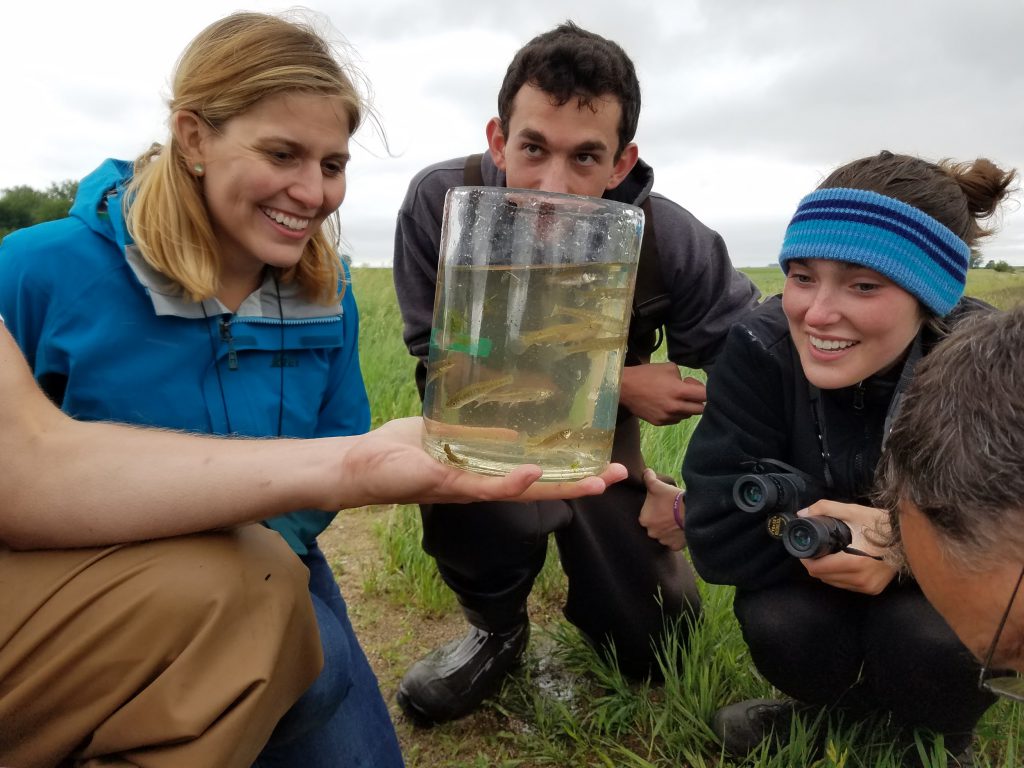 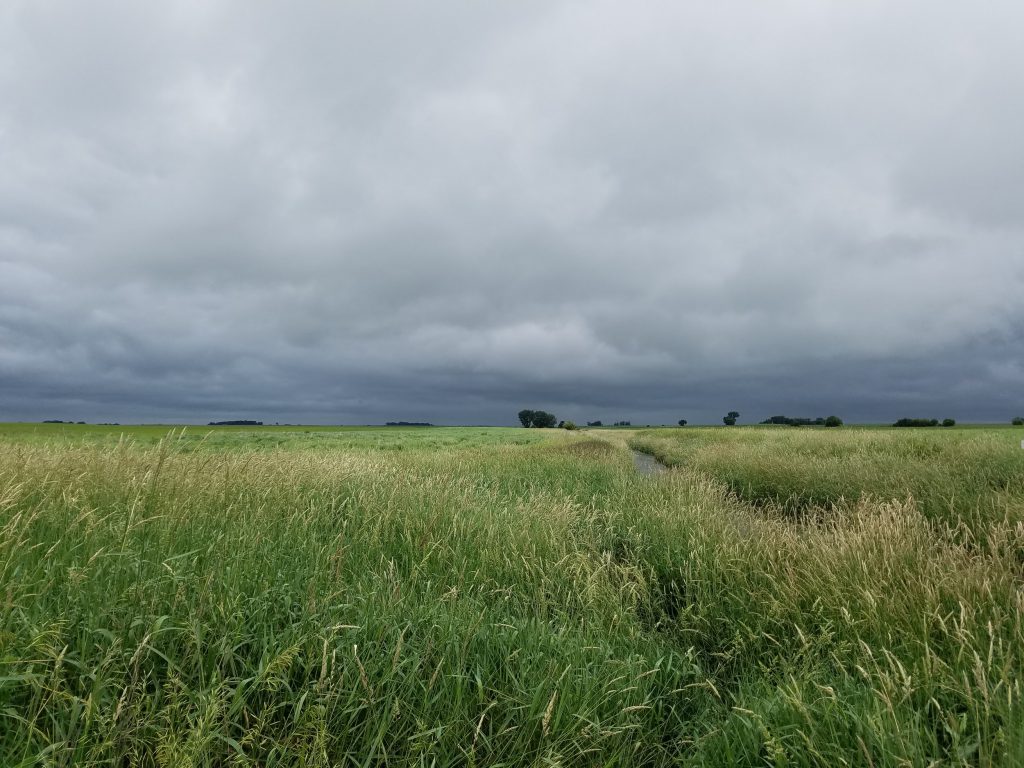 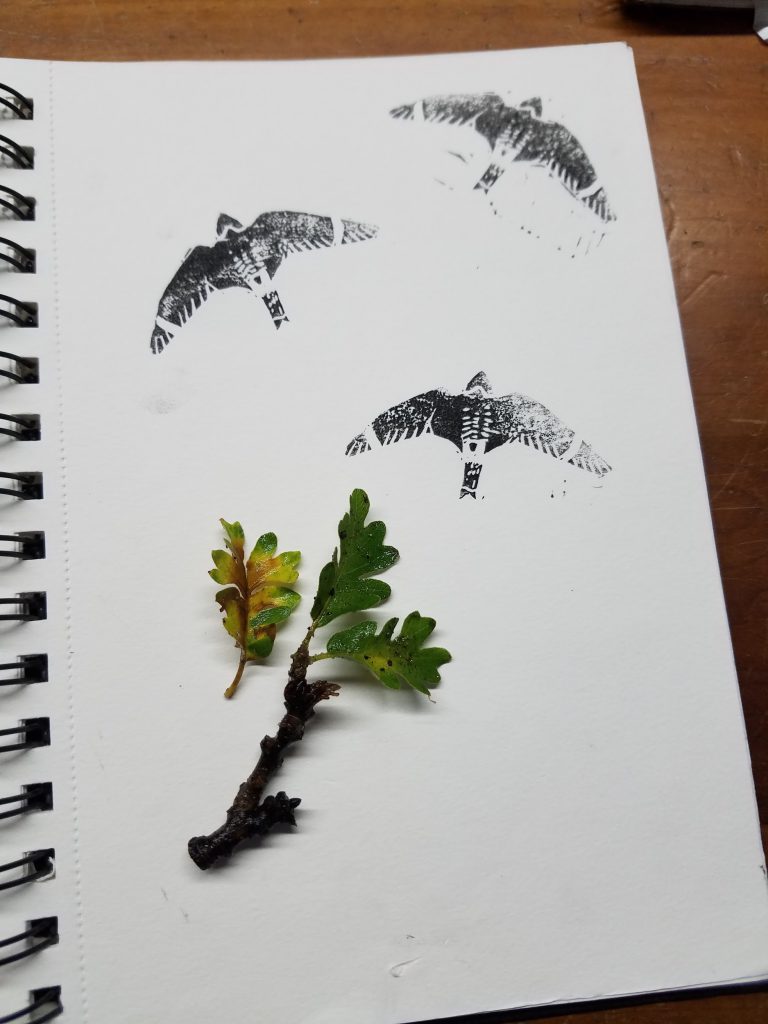 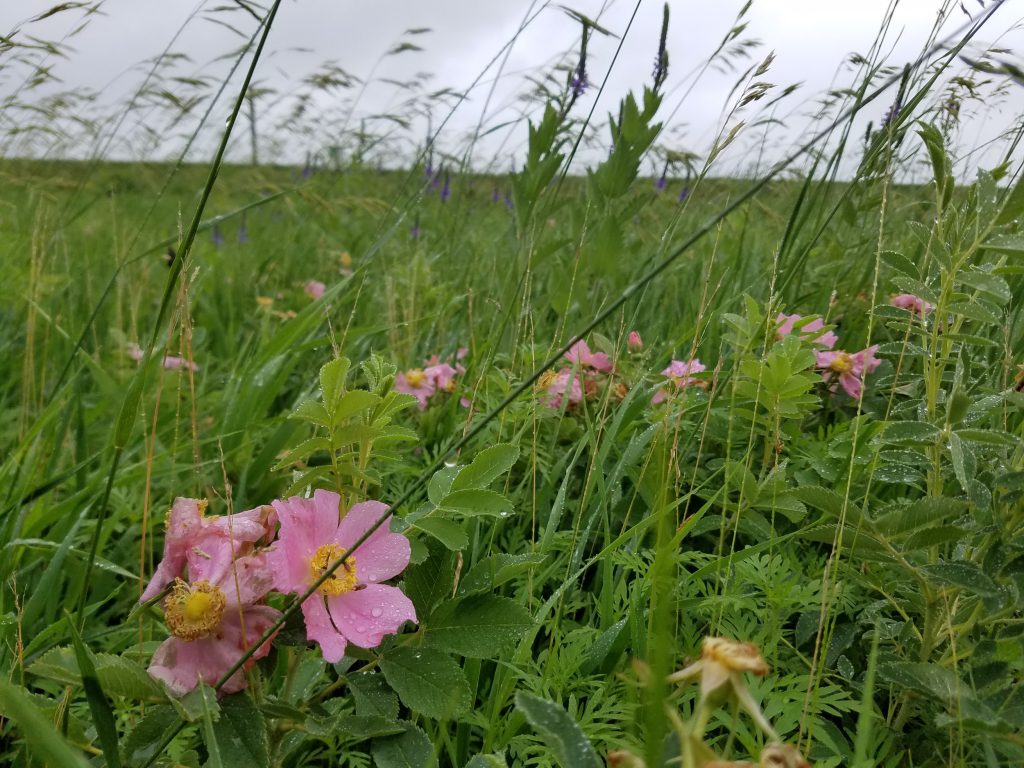 6/22
On Friday morning, my last full day at the lab, Richelle, Anna, and I took out the kayaks just after sunrise to paddle around the bay. We found red-winged blackbird nests bundled within the cattails, and were delighted about how much we realized we had learned about that species and many more in our time here.
As we paddled back in the breaking daylight on the calm water, I knew that it would be hard to leave Iowa and all of the wonderful people, and inspiration at the lab. What a beautiful time I’ve had here.