Artist Lab Report:
No comfort in a growth zone, no growth in a comfort zone
by Ellen Hanauer

Week 2 – No comfort in a growth zone, no growth in a comfort zone

The good news — no poison ivy yet!

There was a lovely parents brunch today. Lisa Roti did a beautiful job decorating the room and Erika created a buffet that was really lovely. I’d like to add that the food at Lakeside Lab has been delicious, thoughtfully planned out, and very considerate of meat eaters, vegetarians and vegans alike. I am amazed that Erika hasn’t burnt the food in the two weeks I’ve been here as I often do. Erika, you are my food guru.

I worked all day. 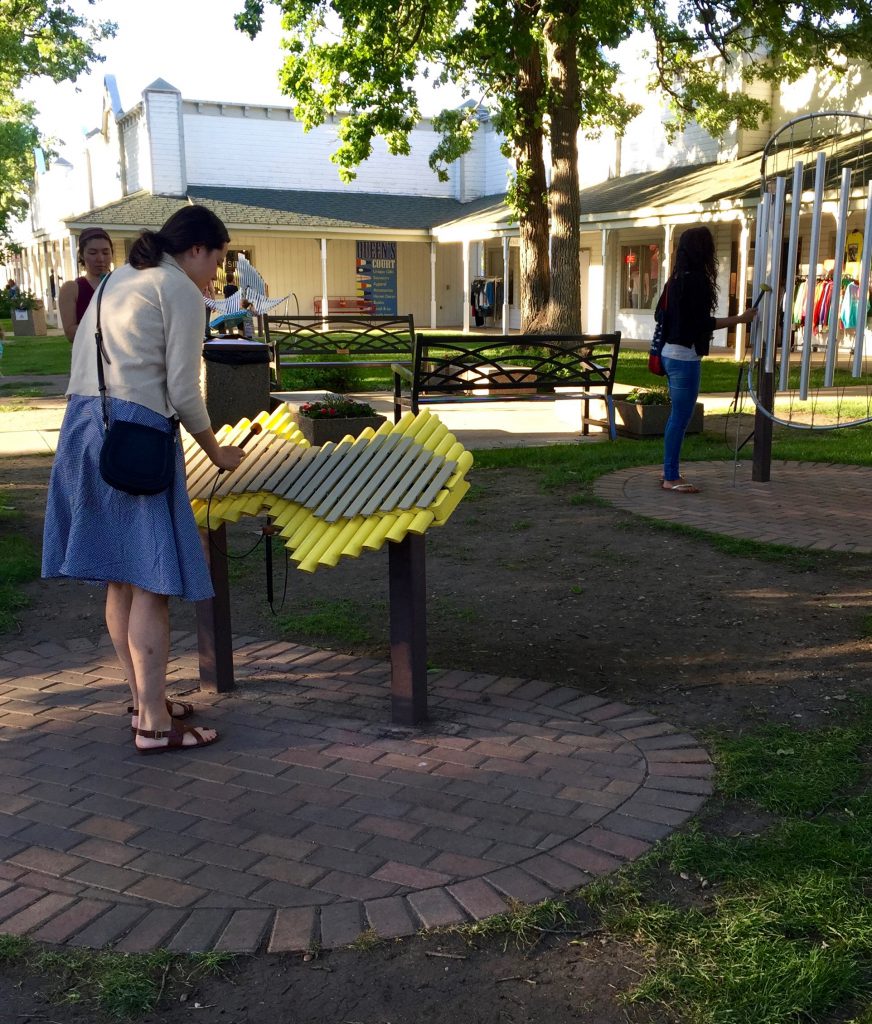 Tonight Jeni, Kartika, Anna and I went to Arnold’s Amusement Park, where we walked around for a while. There’s a little space called Harmony Park, a musical and percussion instrument park, where people of all ages can come together and play. Nothing’s discorded here — all the notes magically come together in soothing sounds that seems to beckon the soul to it’s highest power. I really want one in my home town. 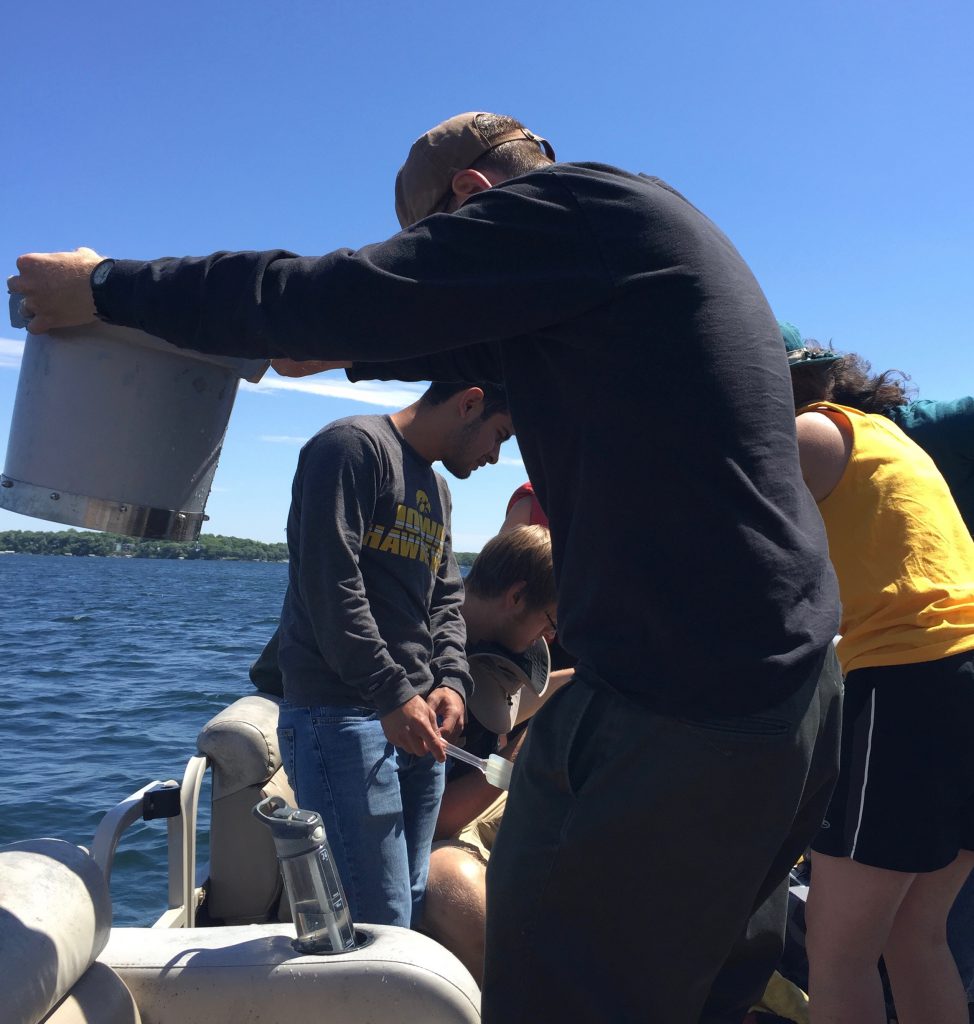 Monday
Early morning working in the studio, then went on the pontoon with Paul and his class to collect plankton. I learned about secchi disks and water depth. The secchi disk looks like a Fisher Price toy. It’s very graphic and it works just like Leonardo DiCaprio in Titanic as he sinks down into the water. When Leonardo disappears, measure that distance in meters to indicate visibility. If you really want to be precise, pull him back up, note the meters where he becomes visible again and average your numbers.

I also learned the importance of where to sit on a pontoon. If you sit up front and there are white caps, you’ll get soaked. These are important lessons for me, in the event I ever get to ride on a pontoon again. 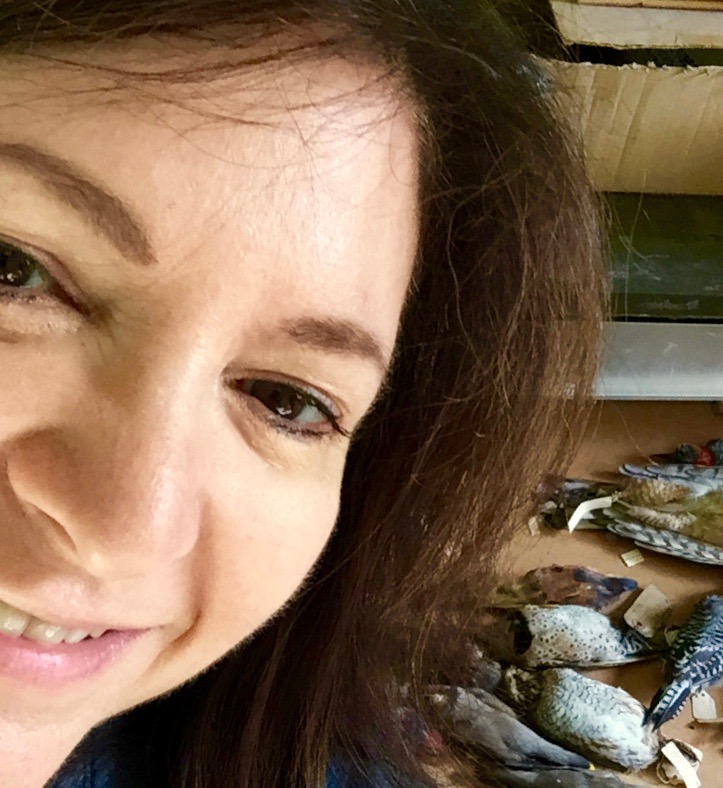 Robert, my new AIR studio mate recently arrived and wanted to draw dead things, and I knew just where to take him. We headed over to the ornithology room in King’s Lab where there are drawers filled with all types of taxidermal birds and critters. I took a selfie with a drawer-full of dead birds, because after 40 plus years, I could. Progress.

Afternoon in the studio and I’m almost done crocheting.
Tonight we went to Kartika’s readings. She read for an hour, but she could’ve read for five. Her stories were as mesmerizing as she is. She had written two diatom poems and I really wish she would’ve read them too. I’m sure I wasn’t the only one in the room hungry for a good diatom poem.

Afterwards, back to the studio

Tuesday
Worked morning and afternoon, attaching cotton cord to the perimeter of the crochet. This piece is going to have to be stiffened and blocked – I’ll do it back home and while I”m at it, I’ll fix those wonky hands. One of them, at least, has to go. I’ve been told that Weiman’s Hardwood Floor polish will stiffen wool and I’ll experiment with it when I get back to NJ.

Wednesday
In the morning, I headed out to King’s Lab to do some diatom research before I began my piece on lens focus . Went to diatoms.org and looked up the various morphology. I decided to use vellum paper to create the illusion of each diatom being in and out of focus simultaneously. 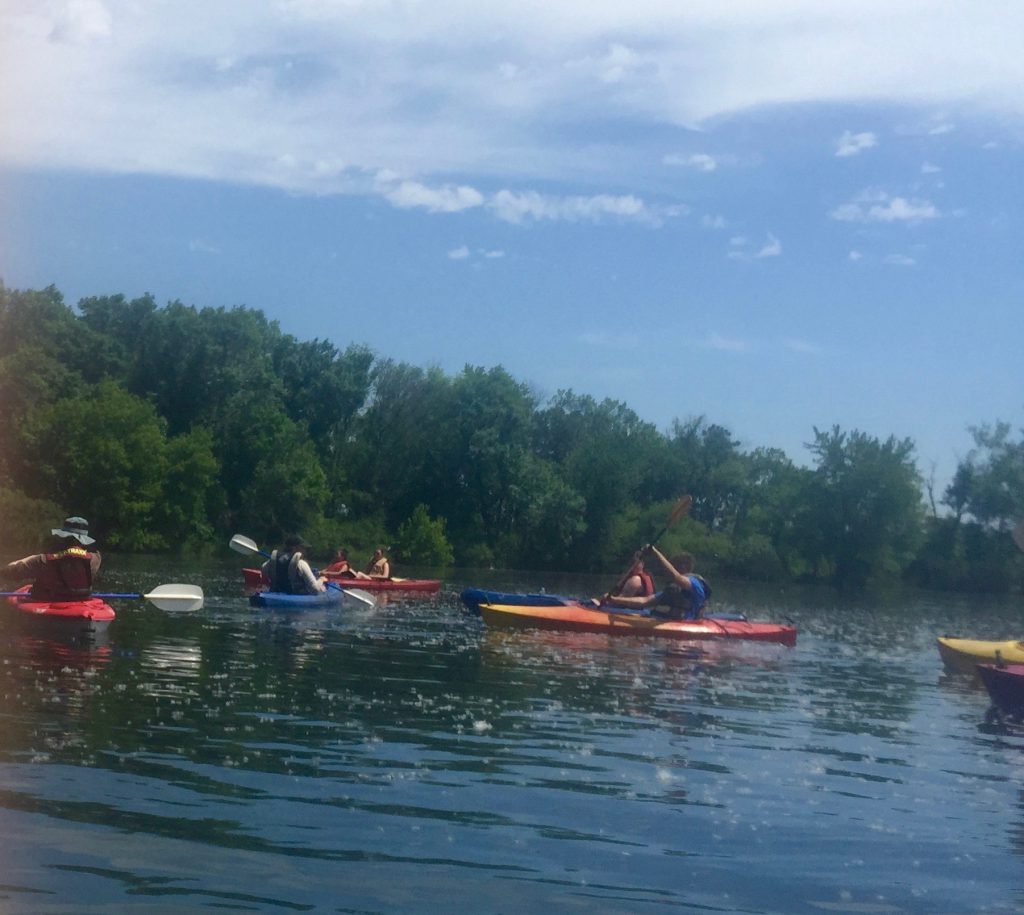 In the afternoon, I bit the bullet and decided to go canoeing with the ecology class. My apprehension with this activity was the result of a television series that my son watched years ago, and spoke of often, called Mystery Diagnosis. This show documented patients with bizarre and obscure symptoms that got progressively worse, and very often they were the result of some weird little parasite that lived in a lake and made its way into their digestive systems. My concern here was not just simply falling into the lake, but swallowing the water, where a slimy worm-like creature might take up residence in my intestines. The rational part of me knows that I spent many years of my childhood swimming in a lake without incident, but I’m not rational when it comes to fear. I put on a life-jacket, crossed my fingers, and hopped into the middle seat of canoe. Kexin and Heather took the oars.

We passed by the eagles nest where we could see the three little eaglets, then headed towards the canals. It was so peaceful. After a while, we came to a shaded area carpeted in a green aquatic plant known as duckweed. If you’ve never held duckweed, run to Lakeside Labs and hightail it to the canals. I could not stop playing with it. I wanted to sculpt with it, I wanted to bathe in it, I wanted to change my name to Dances with Duckweed. I fantasized about covering my entire body with this magical carpet. As if that wasn’t enough, tiny aquatic buttercups sprang from the water while cottonwood seeds breezed through the air. It was otherworldly. 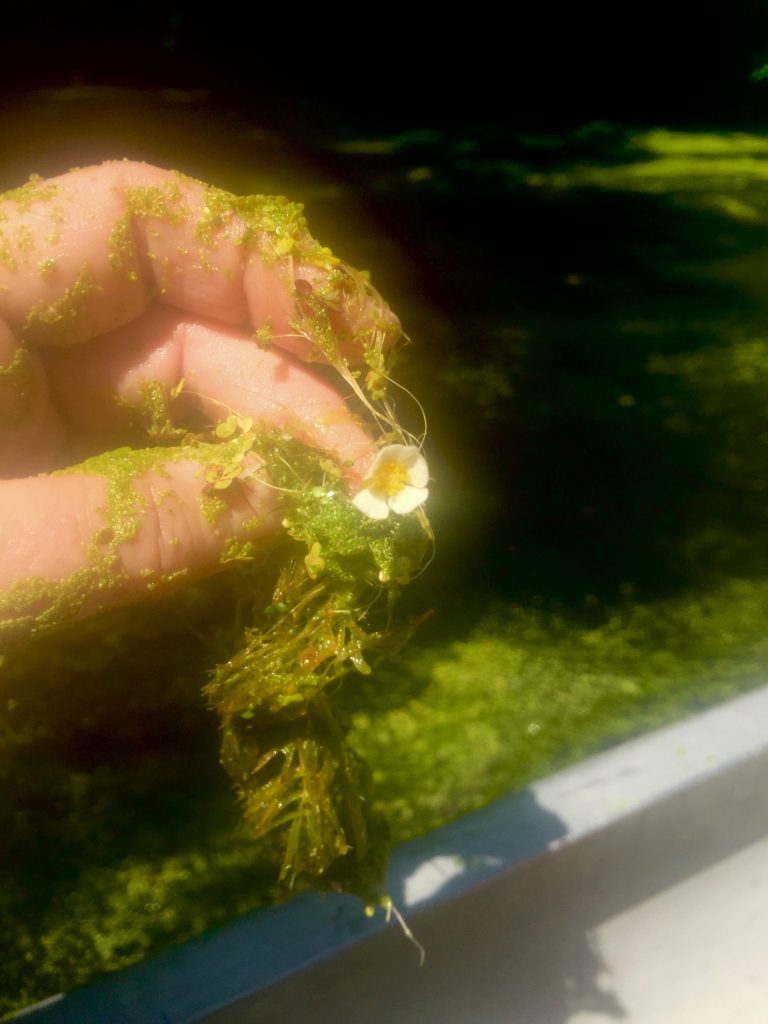 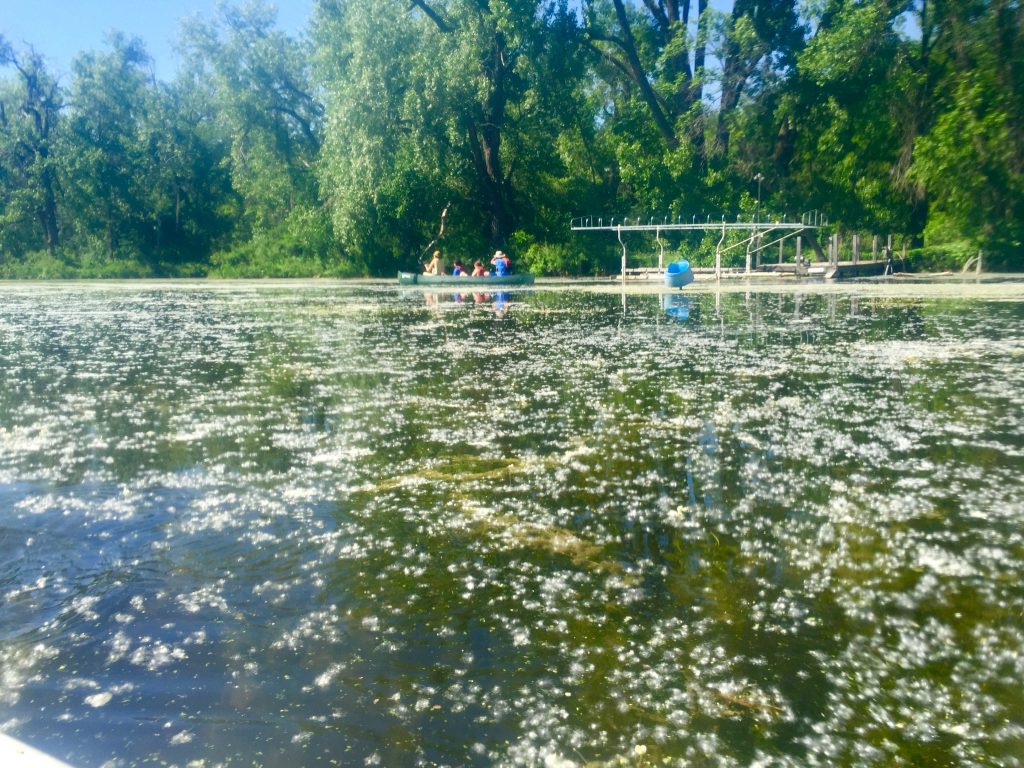 Our canoe almost tipped over as we headed towards shore for a swim, but the gods were watching out for us. I tried taking a selfie with a dead fish, but poor little thing didn’t make it into the shot. It was there on the sand next to the blue canoe, right past where I was pointing. In the future, I will invest in a selfie stick so the next time, I’ll be able to get my whole head and the dead fish in the shot together. 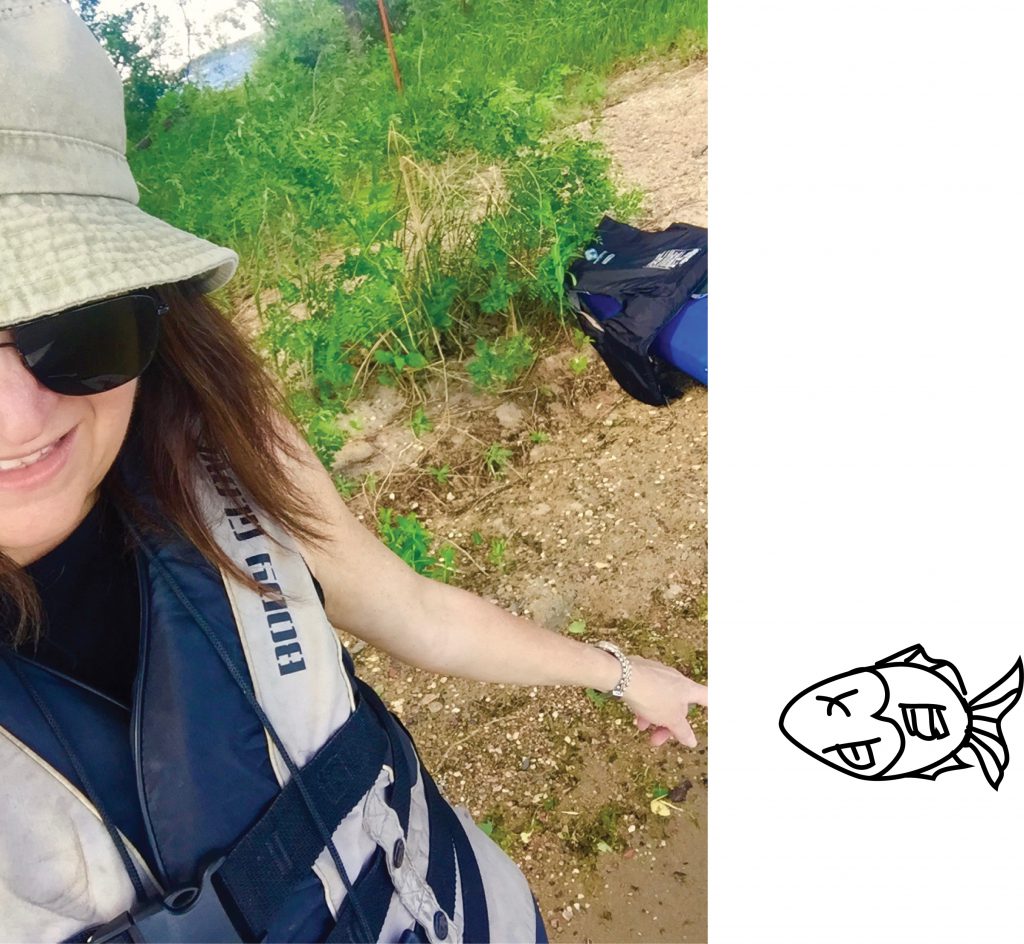 After the youngins went for a swim, we headed through the choppy waters back to Lakeside Lab without tipping the canoe, thanks to Neil’s expertise. 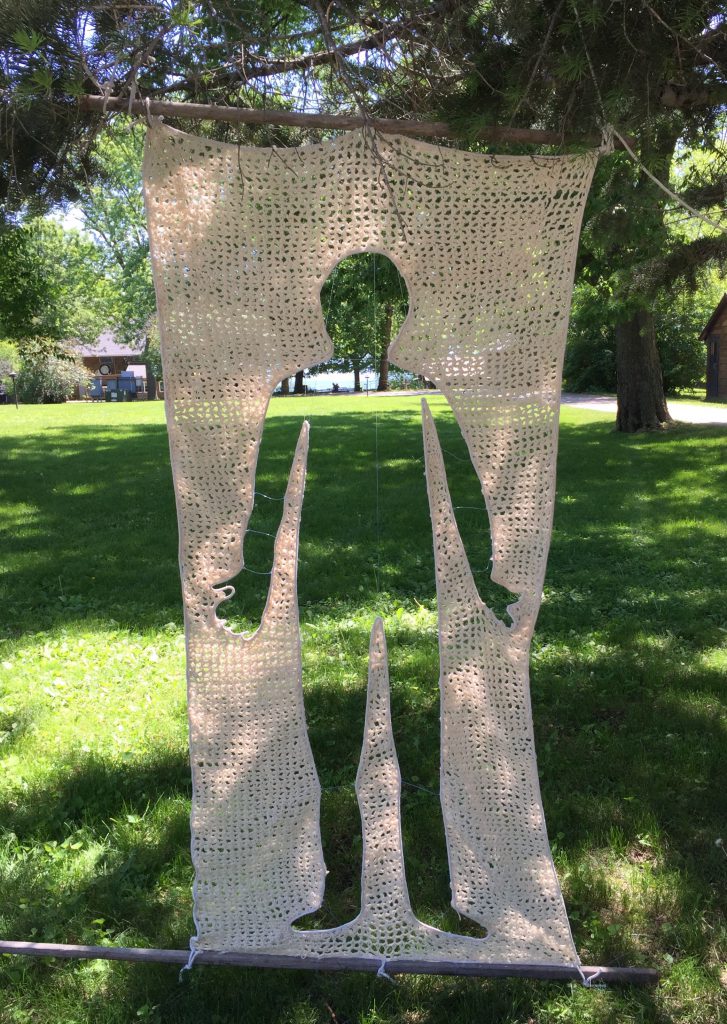 After I got back to my room, I hung the crocheted banner from a tree by the entrance and took a bunch of photos. Yup, this piece will definitely have to be stiffened to get the lines right. I’m hoping to hang it in the center of my solo show this month, and if I’m lucky, the floor polish will harden it enough to knock anyone over who walks into it. 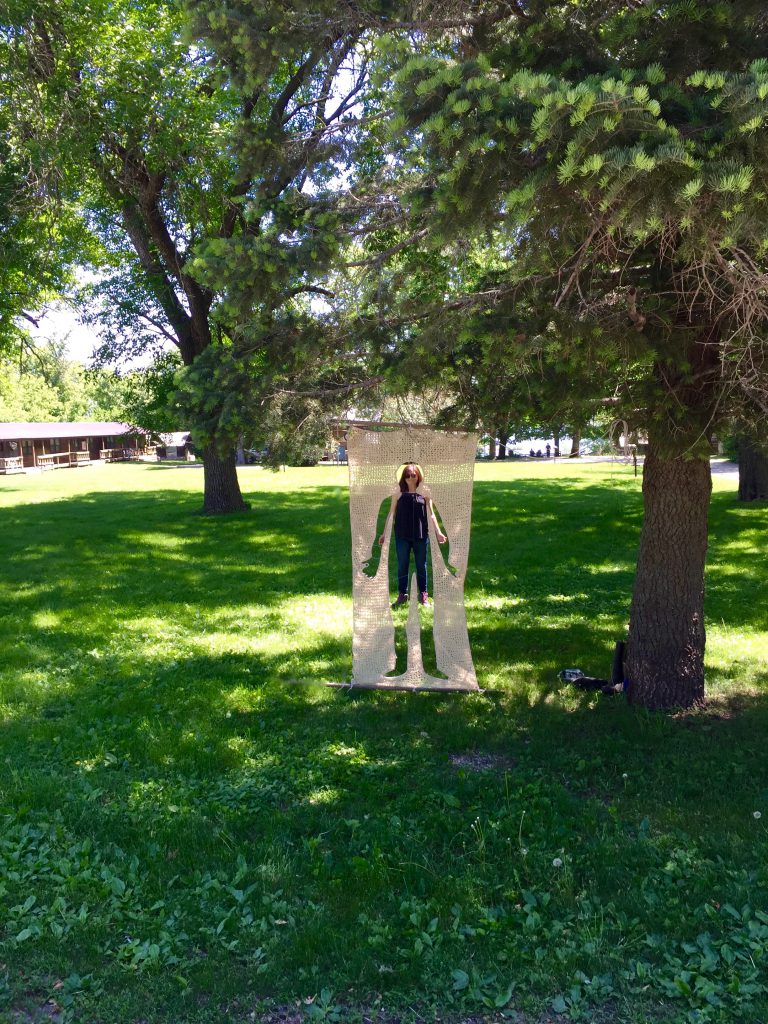 At night, I finished cutting out and punching holes through my paper diatoms. These will be dramatically different from the diatoms I’ve created for my open house this past Sunday back in my NJ studio. Those diatoms were created before my arrival at Lakeside Labs, intentionally with little understanding or research behind them and were inspired by the fluorescent dyes often used by scientists. Now that I’ve attended one of Sylvia’s lectures, done a workshop with her students, accompanied the class for diatom collection and looked at the diatoms under a microscope, I was able to research their anatomical structure with more insight. I realize that creating flat diatoms didn’t include the girdles that many of those chubby diatoms had around their middles and the overall anatomy was all wrong. As with everything else, anatomy counts. Still, there’s some merit to this trippy installation. 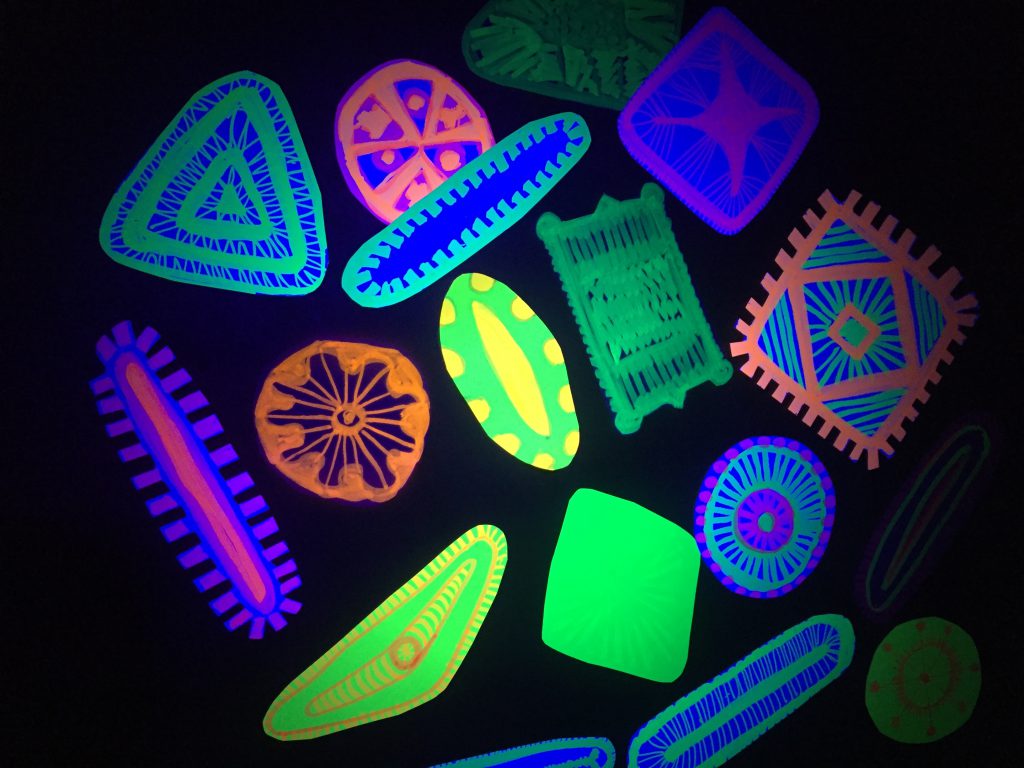 A few of the images from my diatom Installation at Riker Hill Art Park’s open studios last Sunday. 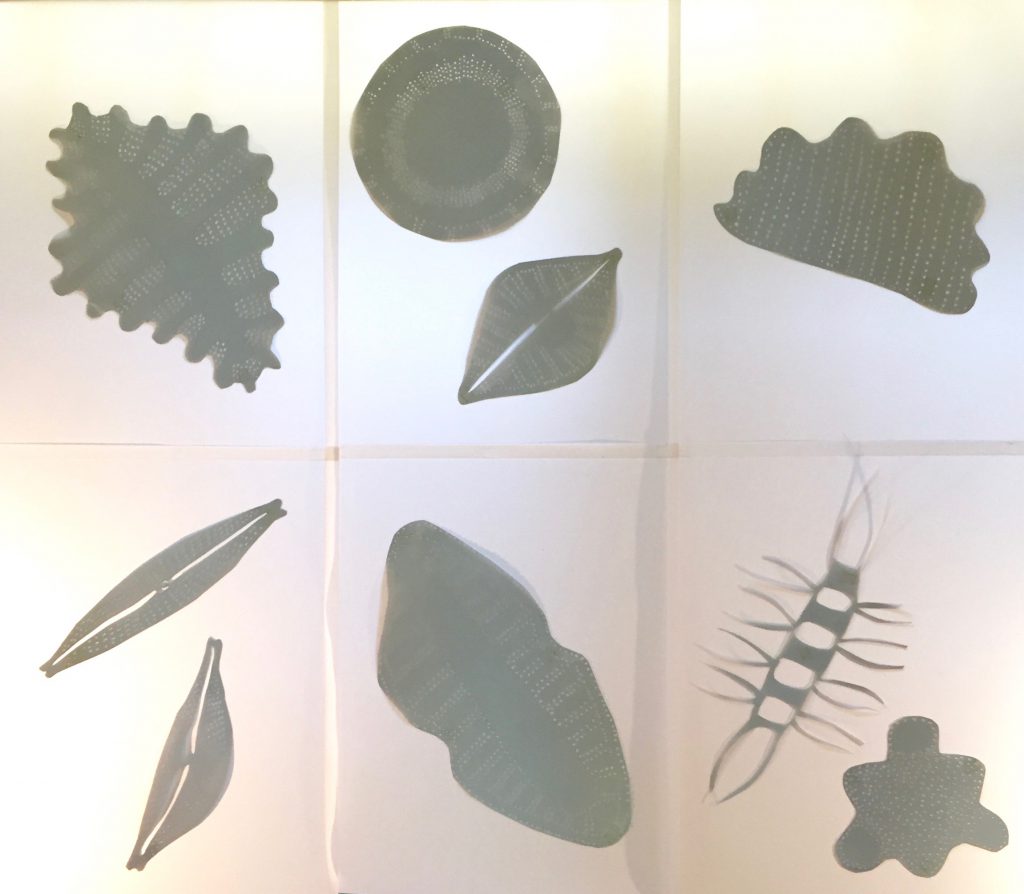 Diatom Art for Lakeside Lab’s AIR Open Studios —I hope that scientists never take their microscopes for granted. I would love to have a microscope at my disposal and can only imagine the world it would open up to me being able to see my everything around me through the lens. In this piece, the focus is on the focus, and I love how the information under the microscope changes simply by adjusting that little knob. 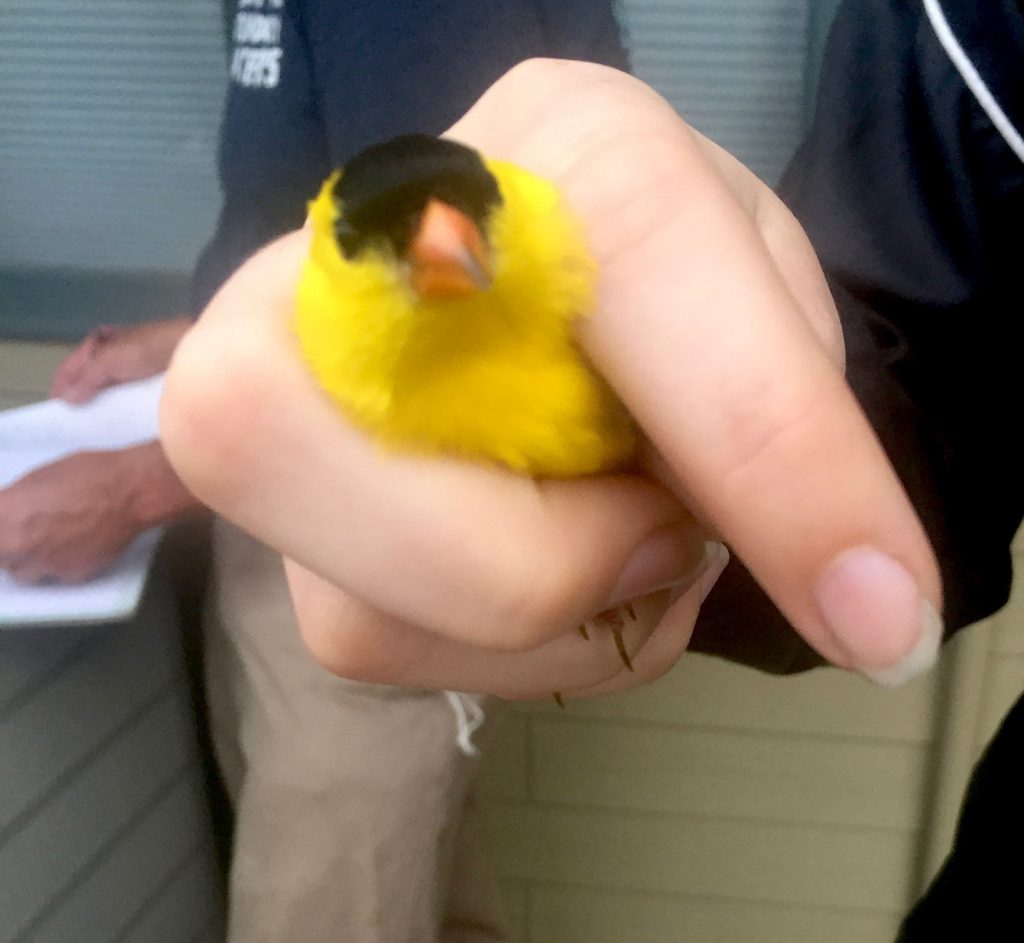 Thursday
We went bird banding with Neil again, this time behind King’s lab. Several birds were caught, including a beautiful goldfinch. The irony of this situation didn’t escape me. The goldfinch is the state bird of NJ and I had to come to Iowa to see my very first goldfinch in person. I also learned, that robins have white rings around their eyes and two little white feathers on the underside of their tails, which will greatly impact how I look at them from now on. 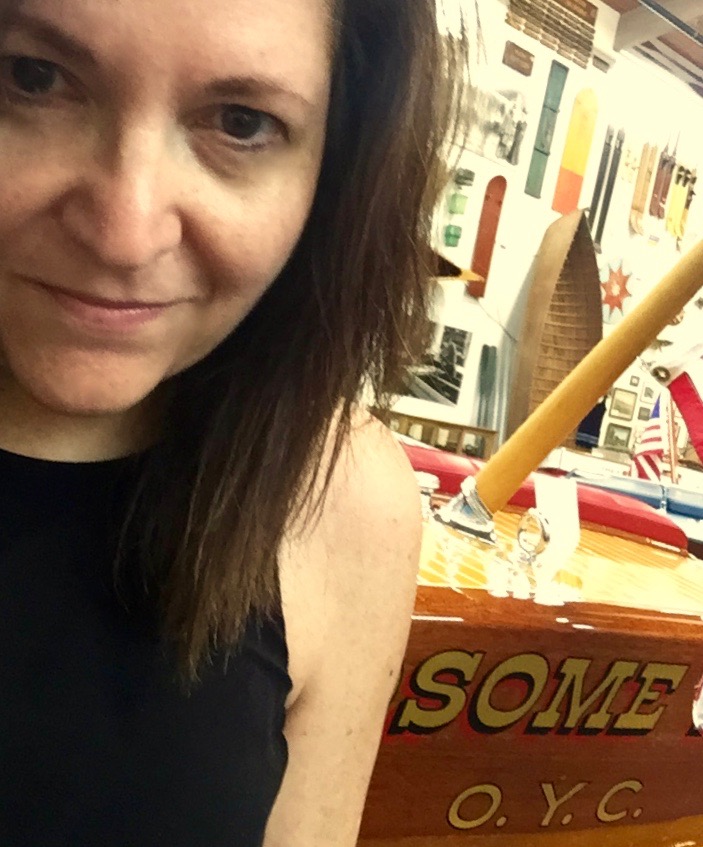 I was back on the pontoon in the afternoon and took a seat in the back of the boat. Live it, learn it. Neil stopped in many different areas of the lake to check water depth and oxygenation, but this trip felt more like a joyride than a field study. We went under bridges, from lake to lake and after a few hours, Neil docked at Arnold’s Amusement Park to treat the class to delicious looking ice cream bars and homemade root beer floats. For those who think I have little self control, and rightly so, I want it noted that I did not order anything. We walked to the Maritime museum where I found a magnificent restored boat from the early 1900s with my maiden name on it.

Friday
Last morning at Lakeside and I chose to go to the early morning yoga class. This is the first yoga class I’ve been able to complete without throwing my back out. Triyoga was such a meditative way to start the day and I only wish they had classes like these near me. It was worth getting up early for this 5:45 am class.

After breakfast, some goodbyes and a few more photos of the property. 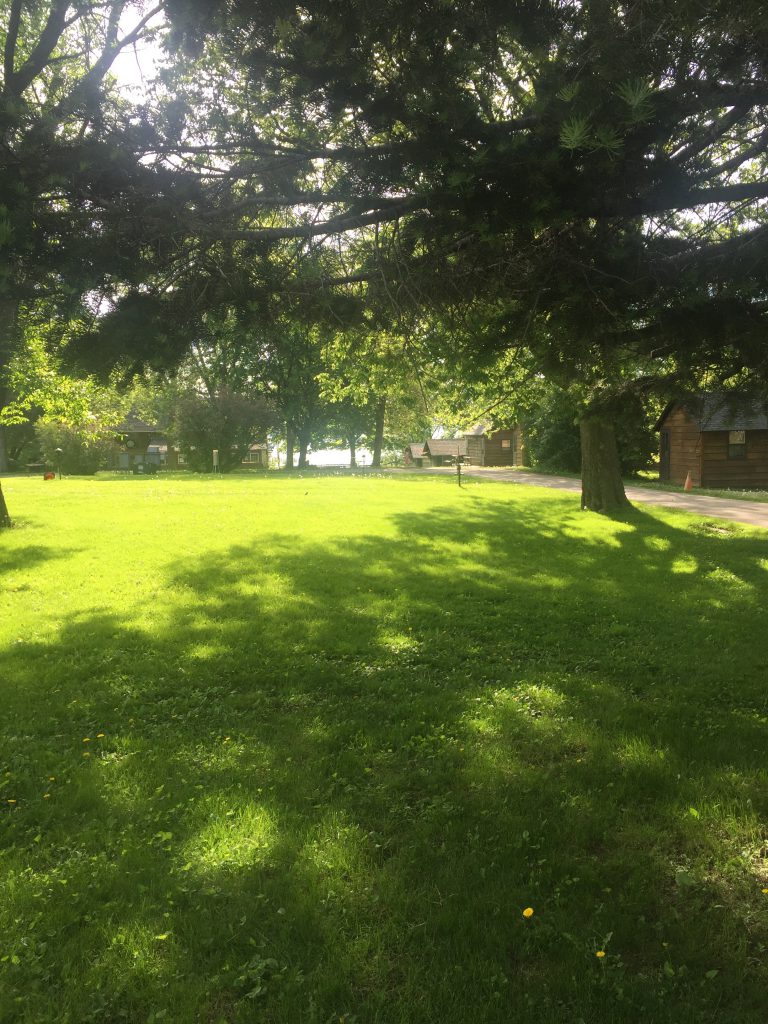 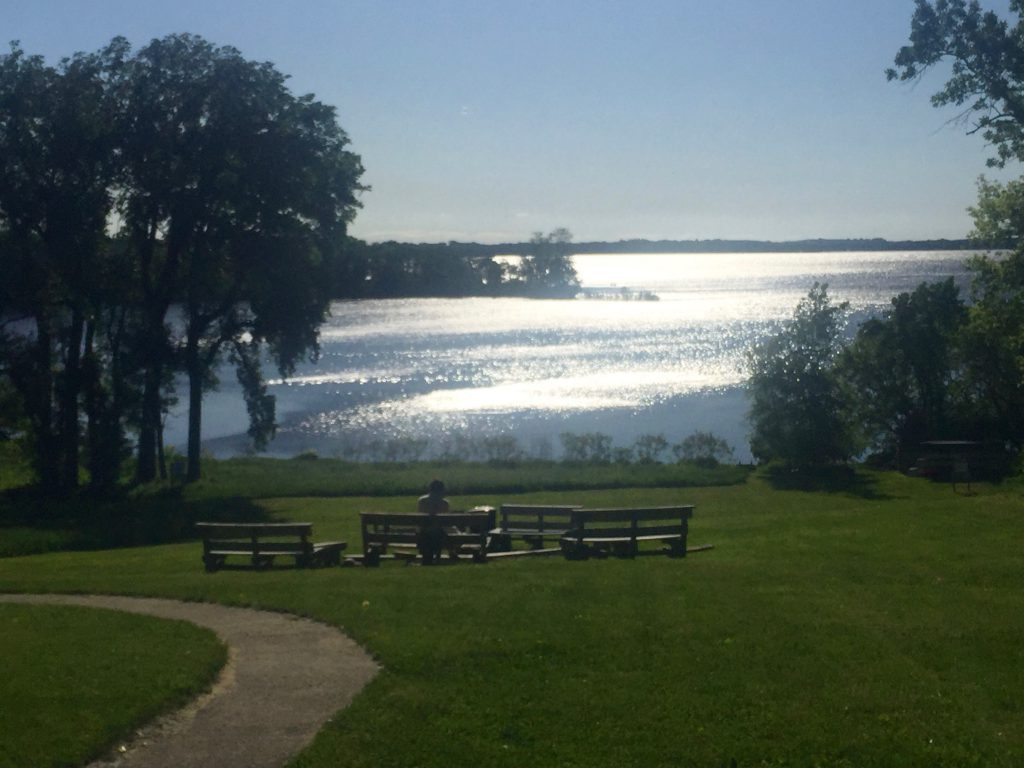 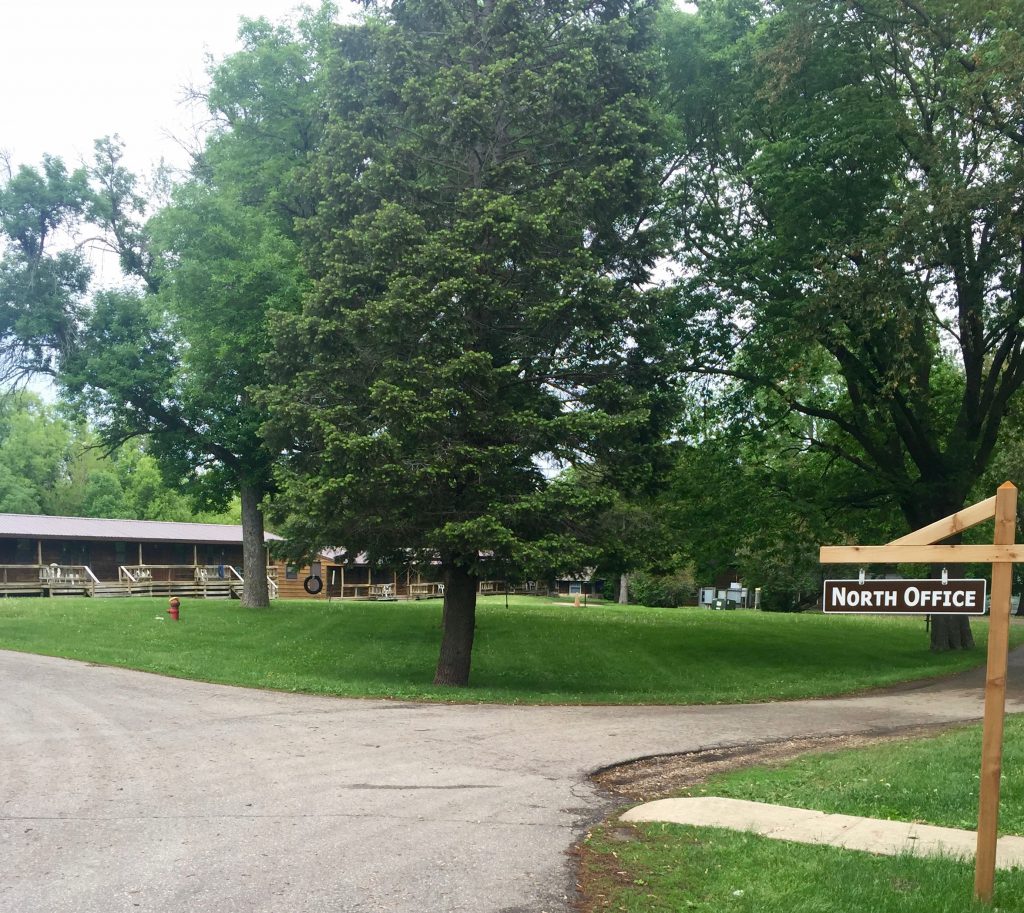 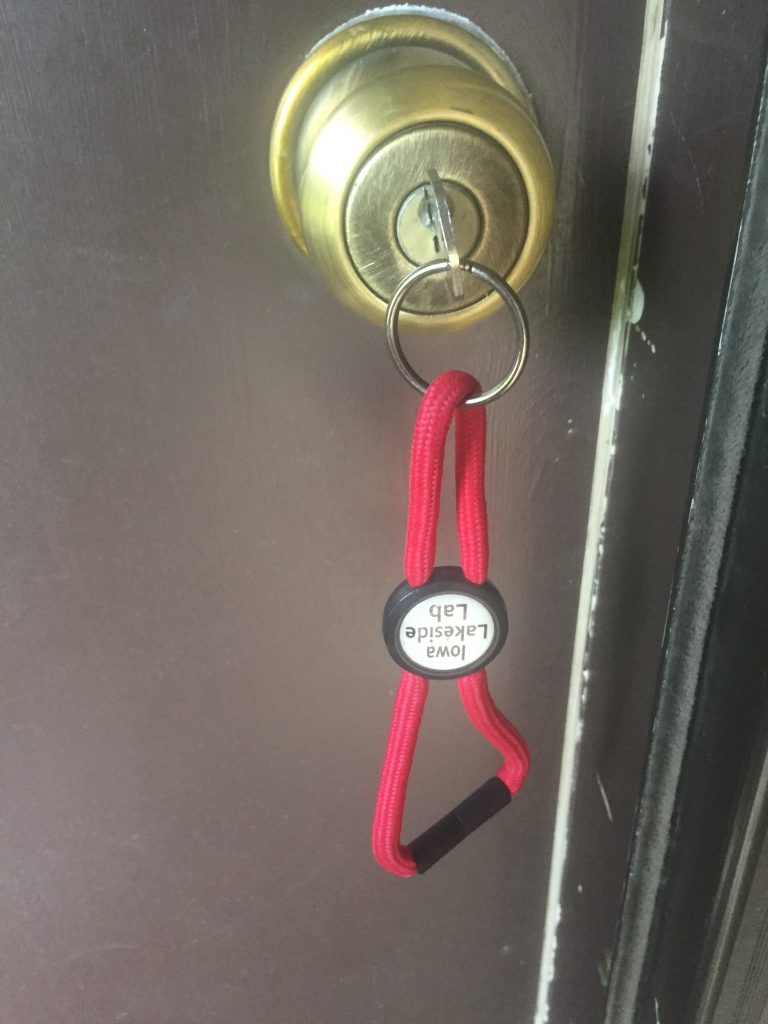 My takeaway — My time at Lakeside labs has been full to overflowing. I am going to miss having the sort of adventures I’ve had during my residency. These past two weeks in Iowa opened my eyes to the beauty of the midwest and to the warm, courteous people who live here. The adventures I’ve experienced as a Lakeside Lab artist-in-residence will be difficult, if not impossible, to replicate back home. However, I will follow the spirit of adventure I’ve awakened and nurture a deepened relationship with ecology and the environment. I’m curious to see where it takes me.

The transformation I had here is known as The Great Work, and this could not have been done without the help of the Lakeside Lab village. I did exactly what I had proposed on my application, which was to explore my relationship with nature. I came to Lakeside Lab being in love with the idea of nature, and left with a respect and curiosity for nature itself. My childhood fascination with birds and fish has been returned to me, a gift for facing my fears while my legs wobbled. Under the guidance of the brilliant and kind instructors, Neil Bernstein, Paul Weihe, Sylvia Lee, and Lori Biederman; Mary Skopec, director of Lakeside Lab; Lisa Roti, Director of Friends of Lakeside Lab; and the irrepressible enthusiasm of the students, I was able to change my relationship with the world around me. I will continue to meet irrational fears head on after my residency at Lakeside Lab. As Ralph Waldo Emerson once said, “What you are afraid to do is a clear indication of what you need to do.” Undoubtedly! 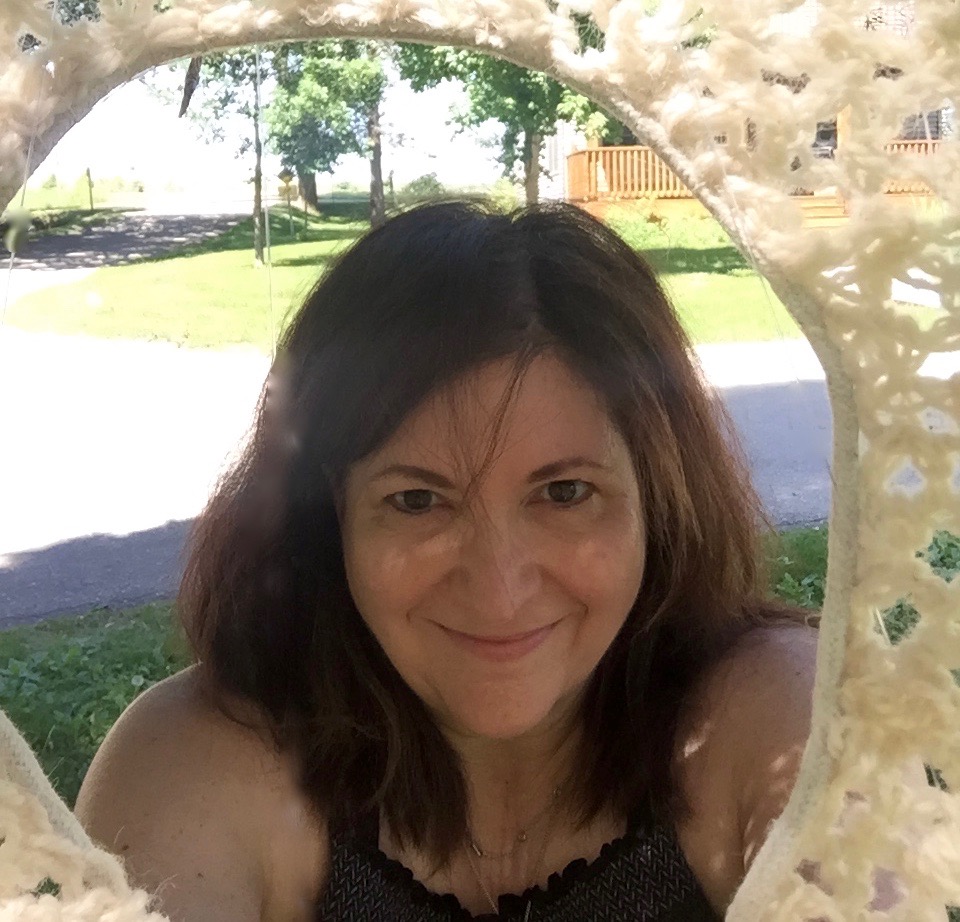 Notes from NJ: for those of you who are curious to know if Weiman floor polish stiffens yarn, the answer is yes – plus it leaves a glossy coat on fingernails that rivals clear nail polish. Bonus!

I’ve also registered for classes in kayaking, am planning to start hiking, and am preparing to venture over to my local environmental center to see what they have to inspire me. I am making a bucket list of things I never had the nerve to do before Lakeside Lab and am going to try to meet these with as much knowledge and courage as I can muster and this will inspire artwork. The soul work continues…